Nikita Burmakin is a graduate of ITMO University’s School of Computer Technologies and Control. In all his nine years of studies, he regularly showed good results both academically and in sport. Since his childhood, Nikita has been playing tennis, got into volleyball in university and then transferred to beach tennis. ITMO.NEWS met the alum to find out how his university education helps him in his sporting career, whether he plans to go back to his profession and what memories he has of his student years. 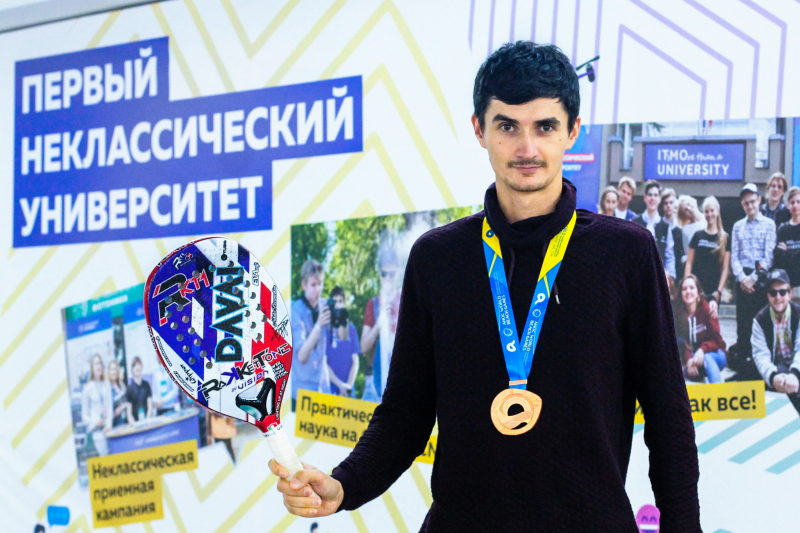 How did you get into beach tennis?

My career as an athlete started when I was six and got into tennis. I’d been a three-time winner of St. Petersburg’s tennis competitions in my age group, but by the time I finished school, I decided to give up this sport, as the competition was pretty tough and there was a high risk of getting injured. The price was too high: if you don’t make it into the league of leaders, you have nowhere else to go, since you don’t have a regular education under your belt. This is why when I was 16-17 years old, I decided to focus on my studies instead, and after joining ITMO University I got into volleyball. I didn’t know how to play and had to grasp all the basics. I started off as an additional player, then I became the captain of my team, and after a while, I made it into the university’s selection team. The peak of my career as a volleyball player was the city’s competition as part of the Admiralteets team, in which we won.

But I decided to stop at this success because I realized that I didn’t see myself playing this sport anymore. During one of the tournaments in a beach games center, I discovered beach tennis and understood that this was a perfect option for me. This is a young sport in Russia, it has something from volleyball and something from tennis, plus there’s an opportunity to research this sport, think of a strategy. I started training, and a year after got into the Russian national team and have been playing for it for six years now.

What of your successes in sport are you most proud of?

I’ve been a citywide tennis champion, then achieved the same status in volleyball. But, of course, my beach tennis accomplishments are much more significant. I’m a two-time world and European champion, merited master of sports, and in 2018, I became a world number one in this sport, and it was the first time in the history of beach tennis that this title was claimed by someone that was not from Italy. Because Italy is the birthplace of this sport, it was its tennis players that showed the best results year on year, so my win had a huge significance for all sportspeople in this field.

You graduated from the Faculty of Computer Technologies and Control. Did the knowledge you received at the university come in handy in your sports career?

Surprisingly, but yes, it did. One may think that technical education and sports aren’t really connected but the thing is that beach tennis is a relatively new sport, and this is why there is plenty of room for research and innovation in it. Thanks to my technical background, I approached many technical and tactical tasks as a researcher: did some measurements, calculations, experimented with modeling the elements of the game, that is used the knowledge and skills that I got at the university. And I still do.

What are the most vivid memories that you have of your student years?

There are lots of them, in fact. One is that I got into ITMO in the first place. The thing is that I studied in a humanities-focused school, spoke perfect French and good English, and knew a thing or two in humanities-based subjects, but nevertheless decided to apply to ITMO, a tech university. Even though I didn’t have a lot of knowledge neither in computer science nor in maths or physics. But I realized that this was more important for me, that I needed this kind of training for my development. So despite having knowledge gaps in these fields, in the last two years of school I set about actively preparing for the exams. As a result, I got in.

I was very happy, but when the studies started, it got very hard, and I felt stressed. At first, I had a lot of Cs, but then I figured it out and retook these exams and graduated with honors. There was even a semester when I only got As – that was great.

I also remember how things were with student sports. When I was a first-year student, there wasn’t a tennis team at ITMO University, and I built it bit by bit myself. It was challenging, but we managed to establish a student club. Some of our team members didn’t know how to play, and we had to teach them, and it was hard to build a team of six players. But this notwithstanding, we managed, from our first attempt, to rise from a weaker second group to the first one, and in our first year, we did a miracle and won the citywide university championship! We won contrary to all expectations, leaving several more famous teams behind. We had a huge enthusiasm and a desire to fight this battle. Generally, my student years abounded with happy moments, so I’m very grateful to the university and remember only all good things.

How did you manage to juggle sports and university studies?

This is how my usual day looked like most of the time: I went to uni in the morning, listened to lectures, did my homework and then went training. I practically didn’t do anything else: no parties, no cinema. I had to fully concentrate on my studies and sports.

But how about rest?

My father always taught me that mental and physical activity provide rest from each other. In combination with a good daily routine, this scheme is self-sufficient. One in this gives help to another, especially physical activity to the efforts of the mind. Those who only concentrate on studying tend to neglect their health. It’s important to keep a good balance here.

You now focus on sports only: training, competitions, tournaments. Did you get to work by your profession?

Yes, I did in my senior years at university and when being a PhD student. But unfortunately, at some point, the schedule became so tough that I couldn’t combine sports and career anymore. And since I showed good results in tennis, I realized that I needed to move on in that direction.

Do you regret having abandoned professional activities?

I do, of course, but I still have time. After all, sporting careers tend to fizzle out sooner or later. I’m 30 now, everyone in the beach tennis community is dreaming about the sport being included in the Olympics. This can happen in 2028, I’ll be 39 then. The decision will be made in four years, and I have to keep playing until then. If beach tennis doesn’t become an Olympic sport, I’ll be glad to return to the profession, because I like my specialization, I have work experience, and I generally showed good results in this field. And I really want to return to ITMO.

The thing is that I don’t really like that I didn’t finish my PhD thesis. I studied for a PhD degree for three years, passed my exams with all As, penned a necessary amount of publications, and started to write my thesis but didn’t have the time to finish it. So I still plan to do that. I hope that one day I’ll be able to get back to that.