How to apply big data to urban and town-planning needs? International participants of «Erasing Disciplinary Boundaries in Urban Studies: Social Science and Computation» conference discussed ecological problems, poverty, infrastructure challenges and public transport. Hosted by ITMO University and Science & Technology Studies Center of European University at St. Petersburg (STS) the meeting brought together experts from Russia, Europe and the USA who exchanged their views and gave a workshop for Master students. 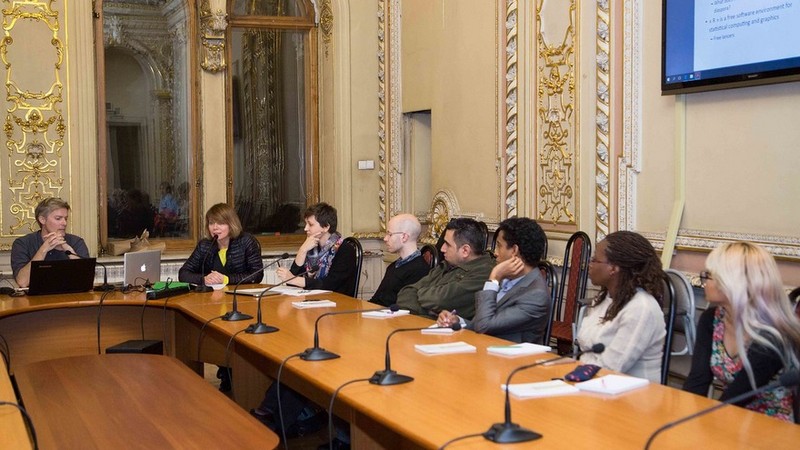 Alexander Boukhanovsky, head of Chair of High Performance Computing, took part in a round-table discussion at which presented his paper Computational City Science: Decision Support through Simulation. Mr. Boukhanovsky commented on achievements of a research team, which developed a project based on big data analysis.  The researchers provided monitoring of main urban flows such as human, transport and financial. To construct simulations they used open sources like watching camera and private databases as well.

The discussions fused together experts in high performance computing, sociology and representatives of the Government.

The program of the conference included a presentation of “Russian Computer Scientists at Home and Abroad” project. Professor Vincent Lepinay talked about the idea of this research and its` results. Participants came to the point that IT expert is a unique occupation, which is very interesting to be researched. Apart from that Olga Sezneva, professor of European University at St. Petersburg, commented on a research of migration mobility and its` peculiarities in Finland, Israel, the United Kingdom and the USA. Following this problem Diana West talked about Jewish migration and ways of how to revive traditions of engineering education by efforts of emigrants who came to Boston.

Furthermore, the experts paid attention to application of big data modelling to principal social problems like prostitution, HIV shedding and localization of expat communities. All these topics were reflected in theses of ITMO University students who followed the Double Degree Master Program supported by University of Amsterdam. The first day of the meeting was opened with a workshop by Peter Sloot, Alfons Hoekstra and Michael Lees. The representatives of University of Amsterdam shared how to present the results of research papers. Some 27 students of Chair of High Performance Computing took part in it where presented their research projects that they had made in the first term of their Master program.

Having discussed interdisciplinary topics rooted in big data and urban studies participants managed to unite experience gained by these fields. The conference was the final session of «Russian Computer Scientists at Home and Abroad» research project. Thus participants summed up the results of two-year research activity.