Recently, there have been more and more gadgets and technologies for creating a «smart home» that can solve tasks on its own and add new functions to common things. Still, there is yet to be a model clever house, and it's not an easy task to decide how to start turning your «stupid» flat into «intellectual» living space. We've tried to answer this question and gathered some info that might help you to get a better grasp of all these new technologies. 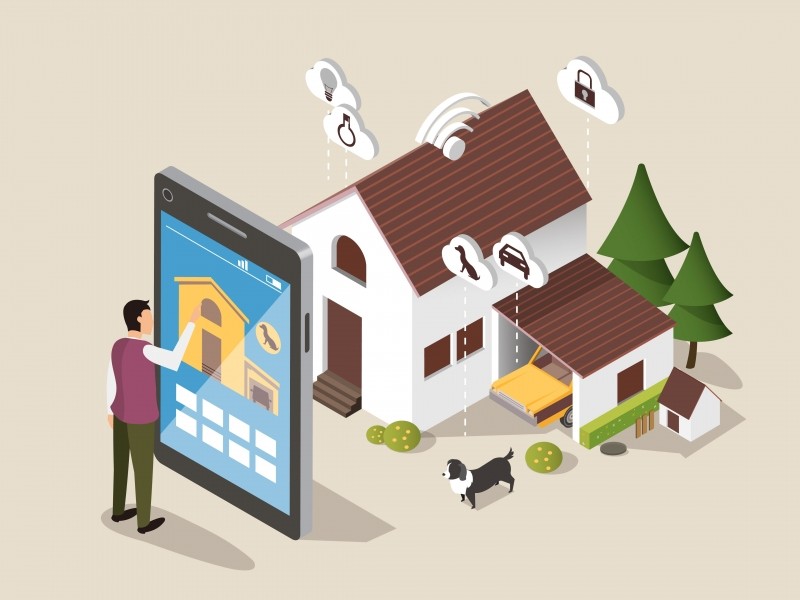 Due to all kinds of sci-fi films and novels, the general impression of a «smart home» system is that such house or flat has to provide maximum comfort for its owner by automatizing common household tasks with high-tech appliances that keep schedule or using intellectual algorithms. In reality, economy is almost as important as comfort: the system counts every liter of spent water and every kilowatt of power, as well as provides the necessary security. All of the system's elements are to be controlled by a common platform — a web-interface or a smartphone app (a separate remote control doesn't make your teapot smarter, does it?), notifications are to be sent to the owner’s phone as well. The system can include different functions:
Climate control — turns on air conditioning, heaters, under floor heating to maintain the desired temperature;
Smart Lighting regulates the lighting depending on the time of the day or preset scenario (party, watching a movie, etc.);
Electrical Appliances Control tells you whether you forgot to turn off the iron or not, or turn on the oven with today's supper an hour before you even come home;
Gas or water leakage Control, fire alarm; Smart Security system — remote control of surveillance devices, turning on alarms when motion detectors trigger.
To get this all to work, you'll need all kinds of detectors, video cameras, electromagnetic valves, switches and dimmers, as well as the «core» — a controller or a server. Such kit is about tens of thousands of rubles, and if you add design and assembly costs — that'd be hundreds; the exact price depends on the house's size and the system's configuration. Ordering one from China

You can order both elements and ready-to-use «smart home» systems on such services as AliExpress, Alibaba, GearBest or Taobao. Most of them don't require installing new cables and can be fixed into your present layout. A good example of a ready-to-use system would be the product of the «Chinese Apple» — the Xiaomi company. Its' Smart Home Kit includes a main hub, sensors for windows and doors, and a motion sensor. Xiaomi also sells lots of gadgets that can be added to the basic kit. All of those are controlled via Android or iOS apps.

Speaking of other Chinese companies, Meizu and Broadlink's products are popular in Russia as well; their gadgets can also be used in creating your own version of a «smart home». Still, using devices from different manufacturers can be a problem: even if they use the same hardware, there is no guarantee that they are compatible, as even devices from the same manufacturer are sometimes not. In the end, the «smart home» owner has to depend on one manufacturer only; also, it might well have no official distributor in Russia, and there can be no Russian manuals to them.

Regrettably, this is an option only for those well-versed in programming and computer systems, as there is no common standard for creating «smart homes» — there isn't even a common communication protocol for «smart» devices. The X-10 standard developed in 1975 uses your regular wiring system. Z-Wave technology doesn't require any wires at all, but it’s a closed protocol, so the manufacturers have to certify their devices and hold all production details confidential. ZigBee is another wireless technology that was developed for communication at low energy consumption. It can be used to develop complex self-configuring networks of different topologies. There are also ones based on industrial and semi-industrial solutions — Beckhoff and different *BUS systems.

The system will also require the «brains» that can be bought (Fibaro and Vera are the popular solutions for Z-Wave technology) or created by oneself. The authors from one of Runet's best resources on the subject advise using a full-fledged PC for the systems core — as it provides the necessary versatility, flexibility and usability, as well as having great potential for improvements. The popular Raspberry single board computer can be easily turned into a controller for Z-Wave using the RaZberry accessory card. Also, one will require software for the system — for instance, that could be the MajorDoMo open platform, LinuxMCE or different fee-based solutions.