Over the last few years, the Internet of Things and blockchain technologies have become increasingly popular. And while the blockchain industry is now facing hard times, IoT technologies are gaining momentum. Alexander Surkov, a leading expert and IoT architect at Yandex.Cloud, gave an open lecture at ITMO University, during which he shared with ITMO students about how Amazon and other companies use IoT solutions in their work. ITMO.NEWS publishes the highlights of his lecture. 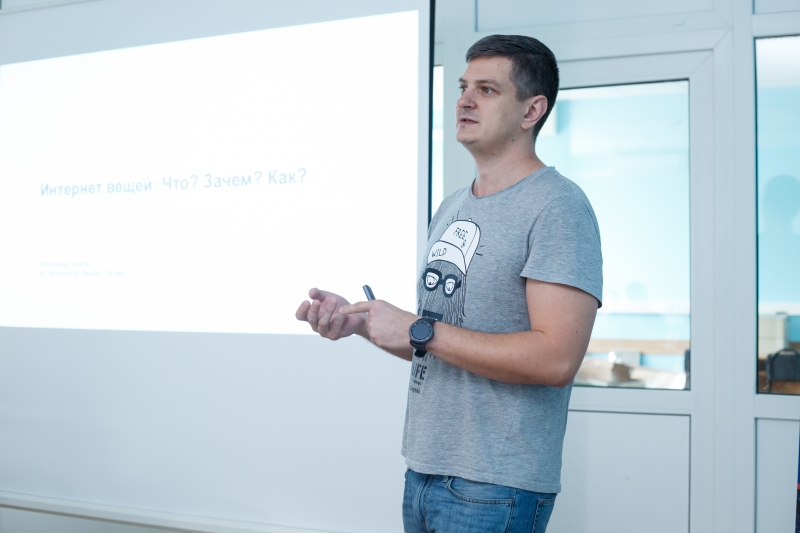 What is the Internet of Things?

According to analytical consulting company Gartner, IoT is the network of physical objects with built-in technologies which allow them to interact with the environment, as well as transmit and receive data. It’s not computers and smartphones that comprise this network, but devices which embed in the environment and interact with the world around them, such as a door opening sensor or the door-close button in a lift.

I like the definition that says that IoT is the concept of a network of smart devices. Not a technology, but a concept, an idea, which sees these networks as a phenomenon that can affect economic and social processes in the society. This definition goes hand in hand with the Industry 4.0 concept and the industrial revolution and sheds some light on the global changes the world is facing right now. Implementation of new technologies such as IoT, 3D printing, blockchain, and artificial intelligence systems can change the way business is conducted dramatically and create a significant shift in workforce demands.

A striking example of such a change is car sharing. The idea behind car sharing is that you don’t buy a car but rent it. Each car is equipped with a huge network of devices, which transmits data about the car to the company’s servers, which, in their turn, transmit this data to users’ phones.

Car sharing has already gained popularity and put competitive pressure on public transport, taxis and private cars. It’s often easier and cheaper to use this system instead of, for example, going by metro. This example demonstrates how IoT technologies affect our daily life, but it’s not the only one.

IoT technologies offer two main advantages. First, they allow for remote control. With their help, you can collect information about a big number of object and accumulate it in one place, and thus optimize certain processes. For some fields, like, for example, car sharing, such remote control is a necessity, while for others it’s more of a useful feature.

Another scenario in which the Internet of Things might come in handy has to do with forecasting breakages. These technologies have long been used for the analysis of big turbine motors and energy generators. The data about breakages can then be used for improving artificial intelligence algorithms in order to teach them to forecast future breakdowns.

There are two types of IoT: industrial and domestic. The first type is used for earning money, while the second one is for convenience and entertainment.

A good example of the industrial type of IoT are the automated warehouses of the Amazon company, where they use robots. This is a complex system that requires special marking, which doesn’t, however, enhance the facility’s efficiency significantly, as the human factor still remains. People can get tired, or sick, they’re prone to mistakes. From a manager’s point of view, if you replace people with robots, it will boost your company’s efficiency.

There are many products out there that use domestic IoT. These include smart toothbrushes, which analyze how you brush your teeth and provide recommendations and notifications, smart locking devices controlled via a smartphone, fitbits, voice-activated digital assistants, etc.

How does it all work?

First of all, it’s important to note that objects almost never connect to the internet directly. The reason for this is that sensors controlling something usually have a very simple processor. Essentially, this is a very cheap device that doesn’t have enough power capacity to connect to the internet and ensure the security of data transfer. This necessitates the use of a gateway that has enough power capacity. It deals with ensuring protection of data transfer, organizes flows and buffers data when there’s no connection.

Another distinguishing feature of this technology is that it divides all the devices into two categories: information-driven, such as computers, phones, tablets and laptops, in short, all the devices that interact with people; and process-specialized, that is those that don’t interact with people and work autonomously. If something goes wrong in this kind of system, the problem will remain until people notice and solve it.

The volume of IoT market amounted to 646 billion dollars in 2018. By 2022, it is projected to grow up to one trillion dollars. Russia constitutes around 0.5% of the total market volume. This is not a good number, but it’s something we have to deal with. The Russian market is estimated at 3.5 billion dollars, and it is expected to grow approximately twofold in the next four years.

Talking to different people working in the field of IoT, though, we see a completely different picture: they raise their brows and say that they just don’t see all this money. Having analyzed the situation, we reached the conclusion that all three billion have been invested in equipment. Our telecommunications providers are currently building the networks which will be used by IoT in the future. This means that the IoT market heavily focuses on data transfer: people are only preparing for innovations to come.

How do IoT devices transmit data? The thing is that regular networks are rather expensive and data transfer via them requires too much energy. To facilitate this process, people came up with several solutions. For instance, LoRaWAN. This is a slow Wi-Fi covering a very big territory.

What is well and what is wrong with the national market?

Russia already has the telecommunications infrastructure at the ready. The companies have invested in the field, developed the equipment, and now really want to sell it. They will help promising projects in all the ways they can to bring their investment back.

In addition to that, we have a state strategy aimed at the optimization of production and labor. According to experts, in Russia, it’s the state that initiates implementation of innovations, while in Europe and the US, it’s companies and users themselves. On the one hand, it’s a good motivation and financial influence. On the other, the efficiency of such an approach is often very low.

In addition, according to surveys and statistics, today’s business is mentally ready to implement IoT but doesn’t always understand the need to do that. In this situation, we have to go to companies and explain to them how IoT can be of use in their specific case. The best way to illustrate it all is with money as an example. It’s important to say, “You spend this amount today, but with IoT, you’ll be able to save this much in two years.”

There are technical problems too. Above all else, it’s the payout from projects. One of our country’s defining features is cheap labor. In many spheres, it’s just easier to keep people at their workplaces instead of investing and implementing new technological systems.

Finally, like many other countries, Russia cannot boast a developed data culture. IoT is all about big data, machine learning, forecasting algorithms, and so on. All these technologies are very sensitive to what kind of data they learn on. A machine should be given correct data for it to operate effectively. The work of a modern data scientist, for the most part, consists of processing data formats and making them appropriate to work with. In this context, you have to be especially careful and thorough when working with the Internet of Things.