An international team of physicists has produced first evidence of particles capable of scattering light in lateral direction by suppressing forward and backward scattering. The researchers studied the physics behind this phenomenon and confirmed their theoretical results with an experiment in the microwave spectral range, proving that lattices or metasurfaces made of these materials can be completely invisible. These results can be used in a variety of applications including light routing, binary-coded holograms, and sensors. The study was published in Physical Review Letters. 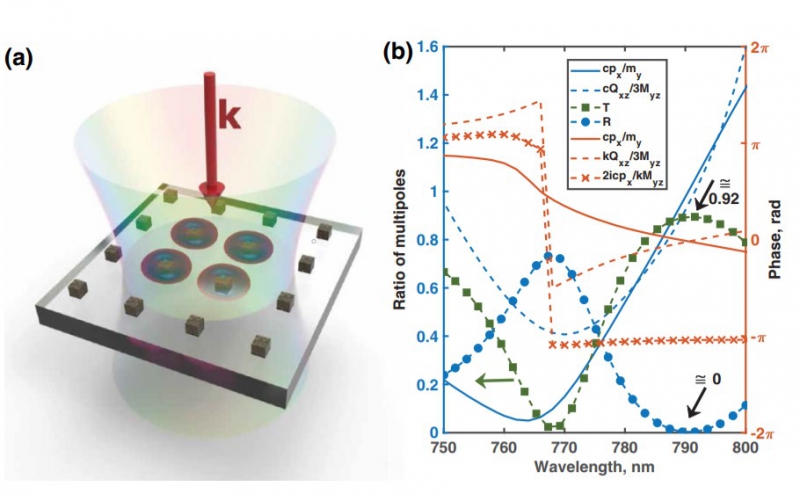 Studies on light scattering in all-dielectric photonics often refer to the so-called Kerker effect which occurs when an object scatters light only in forward direction. In contrast, the scattering of light in the backward direction is called the anti-Kerker effect. Utilizing these phenomena, scientists can achieve unusual ways of light control at the nanoscale.

An international research team has, for the first time, shown that these two effects can occur simultaneously resulting in lateral-only light scattering. Physicists mathematically described the conditions causing this effect and investigated in detail the physics behind it. Their theoretical work was confirmed by experiments in the microwave range. Moreover, ordered structures – metasurfaces – were also considered. Due to the unusual behavior of the particles, such lattices can provide non-trivial invisibility: vanishing disturbance of incident and transmitted fields accompanied with strong field enhancement inside the particles. At the same time, the phase of the transmitted wave remains unchanged as if is no any obstacle at all. This particular effect may be used, e.g., for sensing, a variety of non-linear tasks, and holograms.

“For the first time, we have combined the Kerker and anti-Kerker physical effects to reach a new level of light control – achieving lateral-only scattering almost without forward or backward scattering. And the problem was not only in the appropriate equations but mostly in the physical mechanisms behind the phenomenon. Therefore, there was no information on the necessary parameters of the object with such unique optical signature. And we managed to provide these high-level results thanks to broad international collaboration,” says Alexander Shalin, Head of the International Laboratory “Nano-Optomechanics” of ITMO University.

According to the authors, the study began about a year ago. The first theoretical estimations and predictions were extensively discussed with Yuri Kivshar, a professor of the Australian National University and ITMO University, and Andrey Evlyukhin, a researcher from Hannover Laser Centrum, Germany. The second stage of the theoretical part including numerical calculations was carried out with colleagues from Ben-Gurion University, Israel. The experiments were carried out at ITMO University. This joint work and high level of physical insight into the problem allowed the team to come out ahead of a team in China which was working on a similar problem from the point of numerical optimization.

“In working on this project, I overcame several challenges thanks to the consultations of my supervisor Dr. Alexander Shalin and our overseas collaborators. It helped me build great learning and confidence skills, and I hope to contribute effectively to the development of my field. Optics nowadays is integrated in many disciplines like computer science, biology and chemistry. And ITMO University offers a unique environment for scientific research since it unites plenty of high-level scientists. The faculty supports us with modern equipment and vast scientific collaboration with international research centers. All this makes our capabilities limitless”  comments Hadi K. Shamkhi, a PhD student at the Faculty of Physics and Engineering at ITMO University.