The staff of ITMO University’s International Laboratory of Femtosecond Optics and Femtotechnologies have recently published an article in a prestigious journal Scientific Reports. Their work explores the advantages of the Z-scan method with pulsed terahertz radiation. Based on the results of their research, the scientists proposed a set of recommendations for future studies of nonlinear properties of terahertz radiation. Read on to learn more about the authors of the article and practical applications of their work. 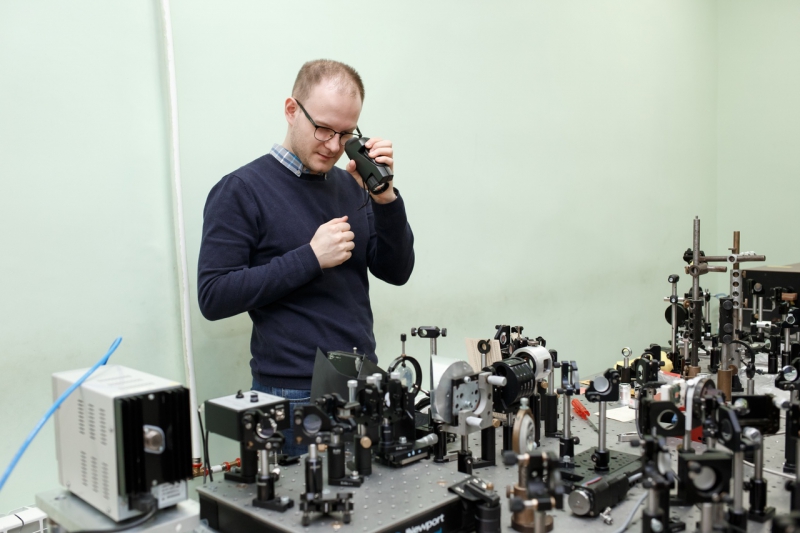 There are many research groups at ITMO’s Faculty of Photonics and Optical Information that do research into terahertz radiation, and the Laboratory of Femtosecond Optics and Femtotechnologies is one of them. One of their latest articles, Methodical Inaccuracy of the Z-scan Method for Few-Cycle Terahertz Pulses, has been recently published in a high-profile journal Scientific Reports.

The main goal of this research is to explore the opportunities of using the Z-scan method in the wide broadband terahertz range. The Z-scan technique allows for studying nonlinear properties of optical materials. Researchers take a study sample (e.g. a crystal just hundreds of microns in size) and expose it to radiation, focused by a converging lens. The sample is then moved against the focus of the lens, which causes the self-trapping effect, leading to a change in the beam divergence and, as a consequence, the intensity detected through the signal diaphragm. As a result, this creates a chart of the dependence of the detected intensity on the spatial coordinates of the sample under study, which has a pronounced maximum and minimum the differential value of which allows to calculate the coefficient of the nonlinear refractive index. This parameter constitutes a very important characteristic of the materials used for the creation of optical elements and systems.

ITMO.NEWS has already covered the first case of direct measuring of this coefficient. Eventually published in Scientific Reports, the article served as a theoretical foundation for the experiment conducted.

The coefficient of the nonlinear refractive index is very difficult to obtain experimentally. What underpins the success are the parameters of both the sample and the radiation it is subjected to. Also critical is the ratio between the thickness of an object and the spatial size of an impulse. The method gives the most accurate results when a sample is smaller than the spatial size of an impulse. It is thus important to match a sample to the existing system or vary the radiation parameters depending on the sample under study in future research.

“Though it is not a tutorial, our work still has some recommendations for the people setting out to conduct relevant experiments in the future,” says Irina Vorontsova, one of the article’s authors. “Neglecting our recommendations will lead to incorrect results when researching nonlinear properties using the Z-scan method. It was an honor for me to conduct such a serious research project alongside accomplished scientists.”

The work is highly topical, as before the Z-scan technique was only applied in the fields of visible and infrared radiation. Now, thanks to the emergence of new high-intensity terahertz radiation sources and the growing popularity of this field in general, there is an increased interest in the opportunity of expanding the use of this method to the terahertz range. The Laboratory of Femtosecond Optics and Femtotechnologies is actively searching for alternative sources of terahertz radiation as these will allow to speed up the proliferation of the technology. What is more, the identification of nonlinear characteristics of materials in this spectral range is crucial for the development of light control devices and future research.

“Our Scientific Reports article is part of a larger effort. It started with a publication in Optics Express, where we experimentally proved the possibility of using the Z-scan method in the terahertz range of the spectrum, and our new article shows the limits for its application. In the course of the work, we identified the parameters of the THz impulse and the environment under study, without the control of which the method will lead to incorrect results. Going forward, we are planning to continue both our experimental research (using the right set of parameters) and our theoretical explorations. We will focus on the development of a modified theory for the Z-scan method, which will enable us to overcome the limitation we found,” shares Maksim Melnik, a staff member at ITMO University’s Laboratory of Femtosecond Optics and Femtotechnologies.