In December 2019, Paris hosted the Smart NanoMaterials (SNAIA2019) international conference, which brought together specialists in the field of nanophotonics, optoelectronics, quantum calculations and others. Supporting the conference was ITMO University, which organized a symposium chaired by Olga Smolyanskaya, an associate professor at the Faculty of Photonics and Optical Information and head of the Laboratory of Femtomedicine. In the course of two days, the participants of the symposium, researchers from Russia, France, the UK and other countries, discussed the latest trends in the field of terahertz technologies and shared the results of their research with each other. 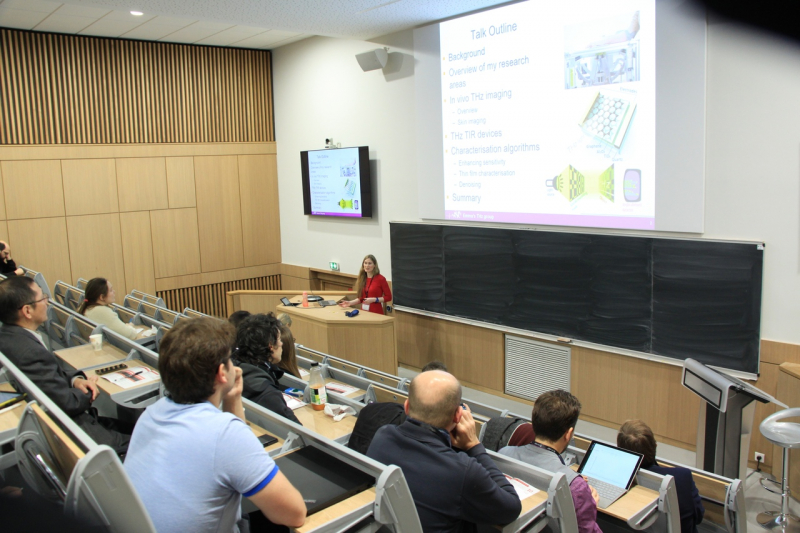 Symposium on Terahertz Photonics and Optoelectronics at SNAIA 2019 Conference

Held for the second time, SNAIA2019 is a conference revolving around the topic of smart nanomaterials. This year’s venue was Chimie ParisTech, an engineering school of Université Paris Sciences et Lettres (PSL) Research University. This is a research that hosts ten laboratories conducting research in different fields of chemistry. Fittingly, the school’s location since the 1920s has been Rue Pierre-et-Marie-Curie (Street of Pierre and Marie Curie) in Paris’s 5th arrondissement, close to the Curie Museum, which is dedicated to the work of the world-renowned scientists.

The key aim of SNAIA is to create a platform for bringing together, exchanging of knowledge and reinforcing the ties between experts from the academia and the industry. This year, the conference’s main topic was “From Smart Materials to Smart Devices”. The program included reports and discussions of the latest research in such fields as wearable and printed electronics, flexible optoelectronics, coatings and nanofilms, nanophotonics, optogenetics, energy harvesting systems and others.

Participating in the conference were the world’s leading researchers from the universities of the UK, Germany, Italy, the US, Russia, Singapore, South Korea, Japan and other countries.

Featured as part of the program was THz Optoelectronics and Photonics Symposium, organized with support from ITMO University scientists. The event was chaired by Olga Smolyanskaya, associate professor at the Faculty of Photonics and Optical Information, and head of ITMO’s Femtomedicine Lab, and Patrick Mounaix, head of nanoelectronics group at the University of Bordeaux’ IMS Laboratory.

According to Olga Smolyanskaya, the event became possible thanks to a long-term collaboration between the Russian and French researchers on a whole range of projects.

“This year, for the first time ever, I was offered to organize a symposium as part of the SNAIA conference. It’s been several years that I have been collaborating with our French colleagues under the grants of the Russian Foundation for Basic Research and Centre National de la Recherche Scientifique, CNRS, and I really liked the prospect of meeting our colleagues in order to discuss the most topical issues in the field. For example, we have been working on joint research projects with our colleagues from the University of Bordeaux for over three years, while one of my PhD students is now conducting his research in France,” comments Olga Smolyanskaya.

Also stepping in as the symposium’s partner was the Women in THz community. This is a public organization serving the purpose of uniting women working in the field of terahertz technologies, and providing them with opportunities for the development of their scientific results. Today, the community consists of women researchers from the US, Canada, Mexico, India, Russia and a range of European countries.

Participating in the symposium were researchers from France, the UK, Switzerland, Germany, the US, India, Canada and Russia. The program of the event spanned two days. The participants explored topical research in the field of THz technologies; namely, they discussed new approaches to the characterization of materials using THz radiation, the development of new materials for the generation and detection of THz frequency range and modulators, new photonic THz systems and devices, and many other subjects.

“While preparing the symposium, it became obvious that there were quite a lot of participants willing to present their research. This is why the program of the event was divided into several sections, each dedicated to a particular topic, such as two-dimensional materials for creating sources of terahertz radiation, terahertz spectroscopy, and the use of terahertz technologies in biomedicine. The latter is exactly the field that I have been doing research in for the past few years. On the second day, there was also a section dedicated to sources and receivers of terahertz radiation,” continues Olga Smolyanskaya.

Among other topics of the symposium was using THz radiation for the conservation of objects of art. For instance, the Femtomedicine Laboratory specialists, together with their colleagues from the University of Bordeaux’ IMS Laboratory, are actively working on the development of THz devices and systems for flaws detection in art (more information on this is available here in Russian).

Among the speakers at the symposium was Sergey Sirro, head of the Restoration and Diagnostics Department of the Russian Museum, who expanded on the tasks faced by the museum’s research and restoration laboratories, as well as presented several projects, implemented by the Russian Museum in collaboration with Russian (ITMO University, St. Petersburg State University, Kurchatov Institute National Research Center) and international (C2RMF, LRMH) research organizations.

“I met Olga Smolyanskaya in the summer of 2019 at the lecture of Jean-Paul Guillet, who presented the results of research of paintings using terahertz devices. Following that, she invited me to participate in the symposium in order to tell the scientists about the task now faced by museum research and restoration labs. This is necessary so that physicists and chemists from research institutes could gain an understanding of what museum specialists are interested in and which scientific fields have a potential for joint research and projects,” says Sergey Sirro.

He also notes that one of the biggest challenges for today’s restoration artists and technologists is related to non-destructive studies of multilayer coatings. Traditional methods, such as X-ray and IR reflectography, provide a total picture of all the layers, but it is almost impossible to determine the sequence of the layers and study each particular layer in detail. This is why the specialists of the Russian Museum approached ITMO University researchers and conducted a number of experiments using optical coherence tomography.

“The results were encouraging but didn’t cover the entire spectrum of our tasks, and then the idea arose to conduct a series of experiments using terahertz spectroscopy,” continues Sergey Sirro. “In 2018, our laboratory carried out experiments on experimental terahertz equipment assembled by engineers of a private company in St. Petersburg. Unfortunately, the prototype of the terahertz system wasn’t configured well enough, and there was no necessary software to process the obtained data. As a result, we came to an agreement with ITMO University to study artworks using modern equipment directly on the Russian Museum’s premises, which gives us the opportunity to not only conduct measurements on test objects but also to test new methods directly on cultural heritage objects from our collection (paintings, icons, sculpture, and objects of decorative art).”

Results of the symposium

As noted by Olga Smolyanskaya, the event provided an opportunity to discuss further joint work on a whole range of projects. For example, when researching the applications of THz technologies for the restoration of paintings, the French colleagues have already suggested using new and more reliable commercial THz devices. Looking ahead, these can be tested during the project work at the Russian Museum.

Apart from that, ITMO University and the University of Bordeaux managed to discuss the prospects for future collaboration. Already now ITMO sends its young researchers to France as part of joint projects between the partners, but in the future, more exchange opportunities are planned. The partners are also ready to discuss the prospects for the introduction of double-degree PhD programs.

“The symposium provided a great platform for meeting one’s colleagues and discussing the details of joint projects. The event brought together our partners from different grants, both from France and various Russian universities. For example, one of our projects dedicated to the application of THz radiation in the diagnostics of socially significant diseases (such as diabetes, cancer and others) unites the efforts of several laboratories from Moscow, Nizhny Novgorod, Tomsk and the specialists from the Almazov Centre,” shares Olga Smolyanskaya.

As noted by Emma MacPherson from Warwick University, the UK, one of the speakers at SNAIA2019, this event presented its participants with a good opportunity to discuss a wide range of topics.

“This is my first time participating in the symposium; I was invited as part of the initiative Women in THz. The program included a wide range of topics in parallel sessions, and this became a great opportunity to meet specialists focusing on different aspects of a topic that’s close to what I do. I also really liked the venue: I visited the Curie Museum, dedicated to one of the three women ever to be recognized with a Nobel Prize in Physics. I think that hosting this event in this part of Paris was very suitable and inspiring,” commented the researcher.