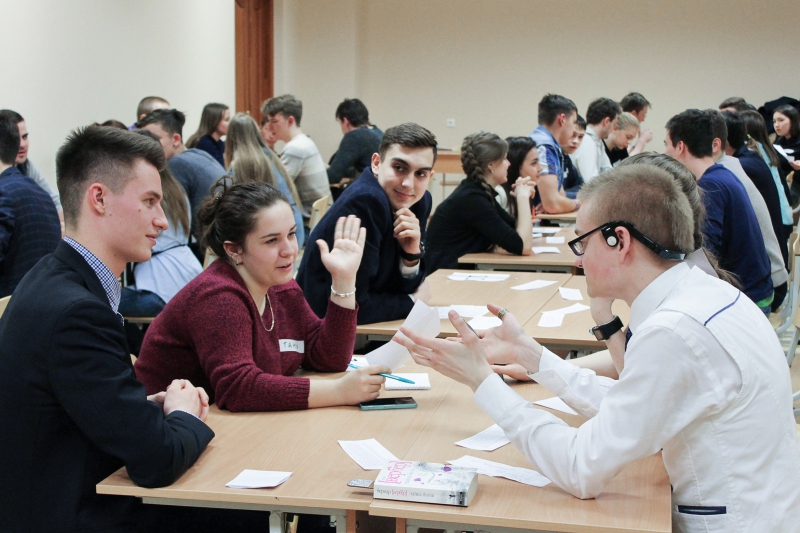 Management sparring is an unusual sport which, despite its relative novelty, has already managed to win over the business community and find its place in leading companies’ management culture. Such contests are held both at corporate and national level in the form of city tournaments and quick managements face-offs. St. Petersburg’s Cup is a city stage leading to the main nationwide event, the Russian Championship in Management Sparring.

A management sparring is an intellectual duel of two contestants who play opposite roles in a pre-set conflict situation. The winner has to not only show their mastery of management skills by solving the dispute to their own benefit, but also remain on friendly terms with the opponent and maintain their good reputation.

“It’s always interesting to observe how participants choose to play out a template conflict situation. To spectators, management sparrings look like a riveting theatrical performance that also allows them to see the solutions to real-world cases and develop a hands-on understanding of different negotiation methods. What also stands out is the diversity of participants’ backgrounds: top company executives can find themselves pitted against project managers and students. These contests prove very popular among companies as they give their staff the invaluable opportunity of practicing their negotiation skills, which isn’t so easy to find in other management competitions,” comments Natalia Lukovnikova, head of ITMO University’s Science and technology foresight center.

Management sparrings draw on the unique approach created by the famous management expert Vladimir Tarasov, who developed a set of techniques for evaluating participants’ performance in a conflict situation: whose solutions were more viable and farsighted, which negotiation strategy turned out to be the most successful. The more management mastery a participant has, the less obstacles they face: negotiations go on quicker and more amicably. The expert’s approach helps to boost the participants’ ability to build a powerful negotiation strategy and successfully implement it in real-world cases by finding suitable management moves. At the end of a sparring, judges comment on the contestants’ mistakes and successes and proclaim the winner. The participants have the opportunity to learn from the feedback they receive.

There are different types of management sparrings out there, but the St. Petersburg’s Cup features two of them: classical sparrings and express sparrings. In classical sparrings, each participant is given their own role, which they have to play out in a five-minute negotiation session, after which the ball goes to their opponent’s court. The opponent makes the choice of swapping the roles and starting the negotiations from scratch or keeping to the established course of events and picking up the negotiations where they ended, in the second five-minute negotiation session. After that, the judges rule on which participant they like better. They make their decision from various points of views as they themselves are given three types of roles to play: HR specialists considering participants for employment, proprietors trusting them with their property, and stakeholders sending them to negotiations. Many factors influence the judges’ final decision: from a contestant’s adherence to the business ethics and control of emotions, to the virtuosity of their attempts to manipulate or blackmail.

Express sparrings also see participants engage in a conflict situation; however, although each of them is set a specific negotiation position, they only have a minute to put it into action, after which the roles are swapped. Rather than evaluating the quality of their solutions, this kind of challenge tests participants’ reactions: how quickly they mount their attack and how much time it takes for them to bounce back from their opponent’s advances. Following the end of two one-minute rounds the judges determine whether this dialog can be considered a fully-fledged management sparring; if the decision is positive, they go on to choose the winner. Express sparrings typically feature fewer judges, and, unlike classical face-offs, they’re not divided into different categories: all evaluators act as people sending the participants to negotiations and thus having a stake in their result.

In March this year, I participated in ‘Manage’, a strategic management challenge. I achieved great results and made it to the finals, which featured 160 students from all over the country. Mindful of my success in this competition, Marina Lebedeva, the Deputy Dean of the Faculty of Technological Management and Innovations contacted me at the end of August, offering me to try my hand in other management contests. That sounded interesting, so I agreed. In this I was also joined by ‘Manage’ semi-finals participant Nikita Bodeyko and my groupmate Alexander Otsolainen. Together we were invited to the St. Petersburg's Cup and attended two preparatory sparrings to get used to their unusual approach.

Despite the fact that we were the youngest and least-experienced participants in the competition, we competed on par with seasoned company managers. My first opponent was Dmitry Votletsov, a company executive with a huge experience in management sparrings. I’d never met or heard of him before and had no idea about his negotiation style.

The case we played out was called ‘The best is the enemy of the good’. We were given the roles of two company managers who had to settle a mutual dispute. In my second sparring, I was pitted against Dmitry Aristov, who’s been competing for over two years. I’d seen him during our training sessions and was very impressed by his negotiation approach. In our face-off, we enacted a conflict between a client of a psychology center and its director, swapping the roles at the end of each round.

During my second battle, I felt more combative and confident, which was recognized by the judges, however both of my sparrings were successful as I managed to defend my interests. I won back two judges’ votes out of seven, which I consider as a major accomplishment. I really enjoyed competing against Dmitry as he didn’t put me under as much pressure as my first opponent did. All sparrings are open for others to attend, so you can meet your opponents in advance and see them play.

The next day of the Cup was dedicated to express sparrings. My first competition was against none other than Natalia Demina, last year’s express-sparring champion, who also came third in this year’s classical sparrings round. She was a worthy opponent to whom I had no shame in losing: the final tally was 3:2 in Natalia’s favor, and she defended her title and became the champion of the day. My second duel was no less daunting: I was paired with this year’s classical sparrings winner Konstantin Selyanin. The count turned out to be 3:2 to my opponent’s benefit, but as in the first game, I competed with a professional.

When preparing for a sparring, I try to second-guess an opponent’s actions. The more scenarios you’ll work through, the better footing you’ll have during the actual battle. My ITMO University’s fellow students and I would even hold separate meetings to talk through each other’s cases and share our thoughts and reactions. But you have to bear in mind that however prepared you are, your opponent can always throw you off guard by making a surprise move or coming up with an argument you could have never thought of. The crucial thing here is not to lose your composure and quickly adapt yourself to the changing circumstances. And it is this that I consider the hardest part of these competitions.

Each contestant was given four different cases, two classical and two express. There was a separate day for each competition round because the skills tested and the tactics used are so different. While a classical sparring gives you time to make a thought-out decision and come to some agreement with your opponent, express sparings call for sharp tongue and quick-wittedness. There is no time to brood over the whole situation: if you’re taken aback trying to think of an answer, you lose. That happened to me in one of the rounds. According to experienced players, your aim should be to make your opponent think as you do and follow your logic to come to your end goals.

The situations we’re given are many and varied. One of my cases, for example, involved an artist gifting his sculpture to a city. He asks for it to be put in the square next to the town-hall, the president’s party headquarters, a business center built by the oligarch that provided the artist with financial support, and the district governor’s office. The crux of the matter was to decide whom the sculpture should be facing as each party obviously wanted this privilege for themselves. In my other case I had to negotiate with a manufacturer in order to return a cargo that didn’t comply with technical standards, but a shipping company failed to deliver it in full, making it impossible to lay blame on a specific party.

Competitions like these really boost your reactions and can be of special use to people who encounter negotiations in their day-to-day work.