Organized by ITMO together with Rosmolodezh and the Presidential Grants Foundation as part of the social projects development program 'People Need You!', the National Forum ‘From Volunteering to Social Engineering’ was recently held at ITMO University. The event’s mission is to introduce young people to the opportunities that exist in the field of volunteering, as well as showcase the best charity projects of 2018. The forum’s activities include practical assignments, workshops, business games, etc.; the participants had a chance to talk to the authors of successful social projects and get some advice on how to launch such initiatives and overcome the challenges they may face. In this article, we summed up the best volunteering projects presented by the forum’s participants. 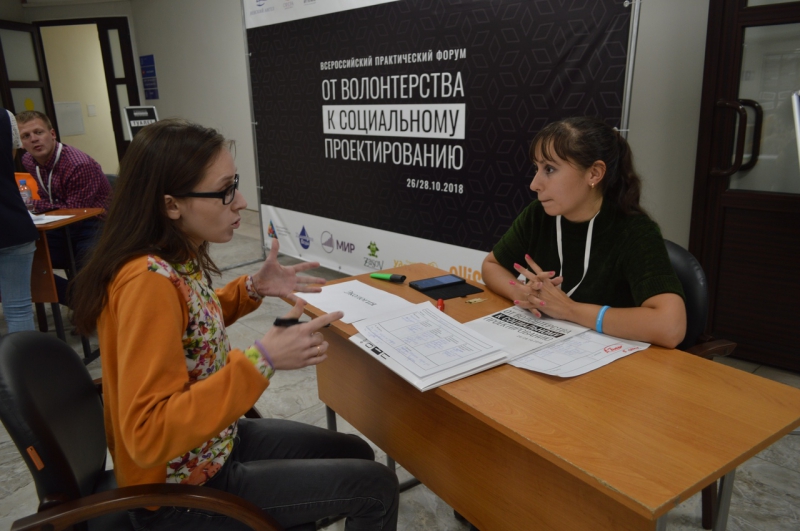 Every year, about 70 children receive medical treatment in the oncology department of Mordovia Republican Clinical Hospital. Because cancer treatment can be lengthy, such kids often suffer social isolation and loneliness. During the course of the therapy, they can’t do what they like, which can be extremely frustrating and may even result in depression.

The ‘Kindness vitamin’ project is aimed at organizing various activities for cancer-stricken children as well as for children with limited health capacities in order to prevent mental breakdown and depression, help them communicate, develop their skills and unleash their creativity.

The project’s coordinators have organized 25 events so far, which were attended by cancer-stricken and orphaned children. A total of 50 volunteers are currently engaged in the project.

Language as a source of national pride, the Komi Republic

This project, which started as a temporary campaign, currently functions in ten Russian regions. The project is aimed at preserving the Komi culture and languages. About 100 peoples live in the Komi Republic, each with their own culture and language. Another of the project’s goals is to encourage the youth to learn more about Komi indigenous peoples and their unique culture.

Starting from 2019, in the regions where the project will be implemented, learning the Komi languages will no longer be compulsory for school children, which means that parents will be able to decide themselves if they want their kids to learn it or not. The project’s coordinators, in their turn, want to demonstrate the importance of learning these languages.

As part of the project, people are offered to sing in their mother tongue and attend various events related to the Finno-Ugric languages and culture. Among the project’s coordinators are linguists and culture experts, who work with both Russian-speaking and Komi-speaking participants.

The project won third place in the contest held as part of the Forum. Its author Oleg Isakov was awarded a certificate allowing him to create his own quest on the SurpriseMe platfrom, a partner of the 'People Need You!' program.

Three years ago, a project called ‘Fun science’ was launched in Belgorod. The aim of this initiative is to popularize science among children. To do so, they talk about complex phenomena in laypeople’s terms, which makes complicated scientific concepts easier to understand.

Today, the ‘Fun science’ team consists of ten people, each responsible for a specific educational track. The project authors have already worked with 2,000 students in ten Belgorod schools, and plan to reach out to another 22 (making it 6,400 student audience in total). They’ve also introduced 4,000 copies of their textbooks to the educational process of several schools. A survey of elementary school teachers and students has shown that this led to a significant increase in children’s interest in their studies.

Acceptance of diversity is a skill necessary for everyone living in a modern society, believe the authors of Inter-Dialog, a Voronezh-based project aimed at improving multicultural communication among the city’s youth. The organization approaches this problem by building a community of volunteers from different associations which focus on resolving inter-ethnic tensions.

There are 89 ethnicities living in Voronezh today, the city also has a lot of international students. The project authors develop the volunteer movement, form inter-ethnic project groups, and inform citizens about different national associations. As of now, there are 72 volunteers working as part of the project.

According to the project creators, their main goal is to lower the number of inter-ethnic conflicts happening in the city. They attempt it by raising citizens’ awareness about different cultures present in Voronezh, helping international students adapt into the city’s socio-cultural environment, and performing other tasks that could be solved based on the volunteer’s expertise.

Launched in 2014, Favorite Economics Meetings is a research and educational platform aimed at improving the financial and economic literacy of people from different age groups: from 12-year-olds to over 65s. For the past year, the project coordinates coached 565 people, including school and university students and pensioners. The project is run by students and lecturers of Tambov State University’s Institute of Economics, Management and Service.

The problem of online fraud remains topical, many pensioners still don’t know how to use Internet resources and purchase things online, while school students have to decide on their future profession. Favorite Economics Meetings address all of these issues.

The project already has several events under its belt, including participation in the international forums in Macedonia and Bulgaria. Another of its accomplishments is a series of professional guidance workshops: economics-themed games for school and university students, as well as workshops and open lectures. The project authors also organize a summer school for school students from Tambov and Tambov Oblast, as well as first-year students from Tambov State University. The school’s program consists of workshops on economics, management, and business informatics.

The creation of Voronezh’s Poetry and Theater Laboratory addressed the city’s lack of a creative space that would allow young authors to meet, share experience, develop their writing skills and promote contemporary poetry in general. According to the project’s coordinators, people often look down on modern poetry because they compare it to its classical counterpart. That’s why Poetoria aims at fostering the poetical arts and fighting popular preconceptions which stem their development.

To prove that poetry is far from boring, the project’s authors started a school of wordsmiths, in which they organize classes on writing and promoting your creations online, as well as lectures and workshops on literature and art, meet-ups with new and established authors, film screenings, and literature games. There have already been eight workshops on the art of writing and four consultations on literature critique, which is especially impressive considering that the project only launched in March 2018. Its participants have voice-recorded literary works (which was published as an audio-anthology) and plan to theatricalize poetry as their next big project.

First place in the Forum’s project contest went to LABIRINT42.RU News; its creator Nikita Aseev was awarded a trip to the south of Russia to participate in an educational summer school courtesy of ‘People Need You!’ program’s partner ITEMA. Coming second were ‘New Horizons’: the author Iznaur Khazuev won a certificate providing his project with accounting services he’ll need to apply for a grant to any foundation of ‘People Need You!’ partner Piter Consult, as well as an opportunity to create his own quest on the SurpriseMe platfrom, another of the program’s partners.