Created for a comfortable and safe experience, this technology can potentially make VR more popular among the elderly. 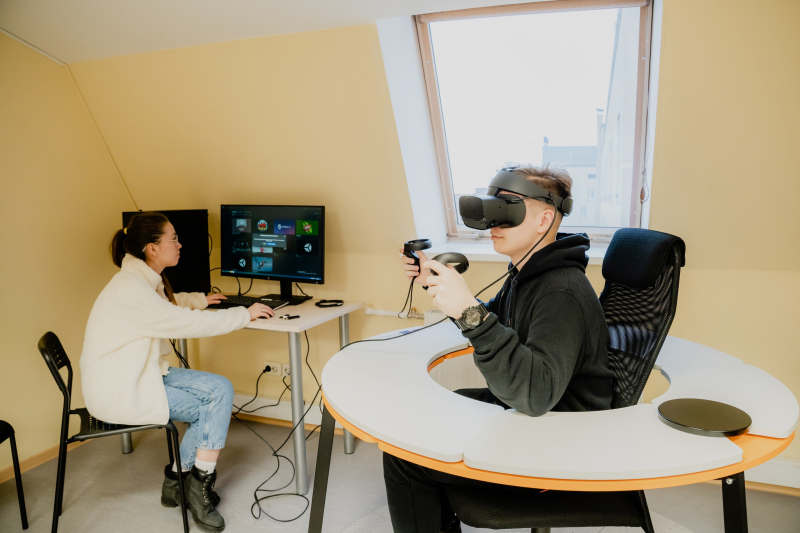 Denis Stolyarov, the lead engineer at ITMO’s Center of Usability and Mixed Reality and the founder of the Resolla.com and Video360production.com projects, has developed a new VR platform – a workstation equipped with a swivel chair and a round table. By design, people wearing a VR headset can lean on a horizontal surface if they feel disoriented. This technology helps them avoid VR sickness, manifested by nausea, dizziness, and loss of orientation when exposed to a VR environment.

“Some people experience motion sickness in VR, which means that they might feel dizzy or nauseous. The problem is that modern headsets can’t precisely mimic each turn of your head, so the image doesn’t move as fast as we’re used to in real life. You might not even notice it, but your brain and vestibular system do. The table comes to the rescue: it returns a sense of reality and solves the problem of disorientation,” explains Denis Stolyarov.

The first prototype of the device appeared several years ago as part of a joint project between ITMO and MIT that focused on the commercialization of innovation. Later, the platform was made more technologically advanced and suitable for mass production. The developers entered this improved version into the BaltSe@nioR project, a part of the Interreg Baltic Sea Region 2014-2020 cross-border cooperation program.

“The BaltSe@nioR program aims to address the problems of aging and stereotyping,” explains Igor Kuprienko, head of ITMO’s Project Development Division. “We started to work on the system during our participation in this program. Initially, it was designed specifically for the elderly because today’s world is rapidly aging yet becoming more mobile. Many elderly people find themselves alone without the support of their families. And for such people, VR can become a special means of communicating with the outside world. It can also be used for leisure and expanding their horizons – the list of its possibilities goes on and on. When we presented this project to our international colleagues, the chair of the board of directors at XAMK, who is also a clergyman, suggested holding religious services in VR for those who can attend them in-person.”

So far, only one copy of the system exists and is kept at ITMO Technopark’s XLab. Initially, there were plans to bring the original to Estonia and Finland for presentation, but the pandemic got in the way. Now, the developers are wrapping up the preparation of the legal paperwork and have already sent their design documentation and blueprints to their international colleagues for on-site assembly.

The device has not been tested yet, but it will soon become part of a sociological study conducted by Andrei Chugunov’s research team.

“BaltSe@nioR also tries to solve the problem of accessibility for older people and creates a range of accessible public spaces for seniors: museums, theaters, libraries, parks, spaces, public transport stops, etc. The participants of the program have conducted research based on a survey of state and municipal authorities in several countries and written a scientific article, which will be published soon. What is more, Lyudmila Vidyasova, the head of ITMO’s Office for Monitoring and Research, greatly contributed to the research. There are also plans for a revival of ITMO’s University of the Third Age initiative. All this will be headed by Andrei Chugunov, an associate professor at ITMO’s Institute of Design & Urban Studies and head of ITMO's eGovernment Center,” says Igor Kuprienko.

The project has already earned the interest of several municipal institutions in Finland and some educational institutions in Russia: the Northern (Arctic) Federal University and the Sevastopol State University. It is also involved in the implementation of a grant for the creation of an online museum dedicated to the military history of Russia.