A contest to identify the top ten innovative companies in education was organized by Business Priority, the innovation platform of the Roscongress Foundation, with the Ministry of Science and Higher Education, the Ministry of Education, and the Agency of Strategic Initiatives. The winning projects were presented at SPIEF 2021. Among them was a project by NT-SPb, a company that’s been based at ITMO’s Technopark for over ten years creating nanolaboratories for schools. 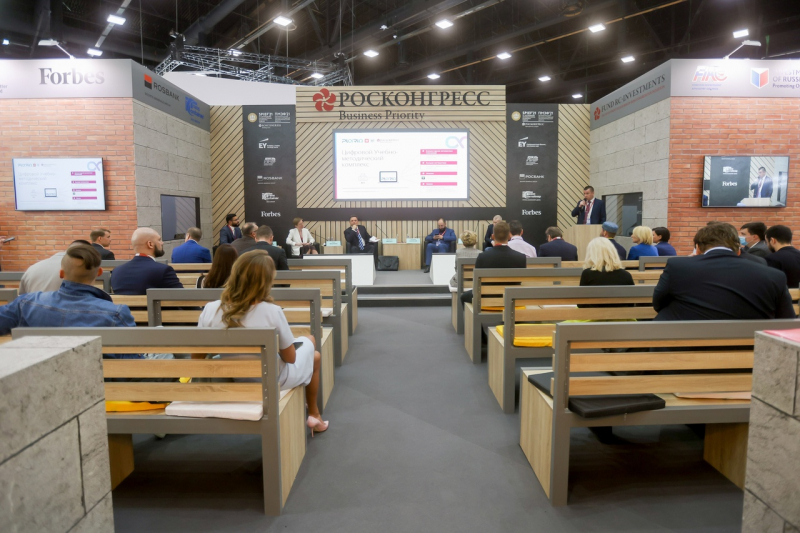 Award ceremony of the contest at the panel discussion Education of the Future: How Can We Capitalize on the Implementation of New Formats?, SPIEF 2021. Credit: roscongress.org

Last year, in preparation for the annual St. Petersburg Economic Forum (SPIEF), its organizers launched a national competition to discover those companies that develop and implement innovative solutions for schools and higher education institutions. In particular, new technologies for providing instruction.

The ten best applications selected by the expert board as finalists of the competition got the chance to present their solutions at SPIEF 2021. Among these top ten was NT-SPb, a company founded in 2003 by staff and lecturers of ITMO University and the Institute for Analytical Instrumentation of the Russian Academy of Science. The company has been a resident of ITMO’s Technopark for over ten years.

NT-SPb specializes in nanodiagnostics, as well as equipment that provides training platforms to introduce students at schools and universities to nanotechnologies. The company’s most renowned device is the High School Laboratory for Nanotechnology which combines probe, electronic, and optical microscopy approaches.

“To keep things fair, we have to acknowledge that we developed the software and hardware for the laboratory together with the LMT company, another resident of ITMO’s Technopark,” says Alexander Golubok, founder of NT-SPb and a professor at ITMO University. “Each laboratory includes four or five devices that were designed for educational purposes. Importantly, this hardware is supported by methodological materials that we tested at ITMO’s School of Physics and Engineering – because equipment alone is not enough if you don’t know how to organize your classes around it. Ours is a complex solution where the equipment is accompanied by methodological instructions on how to use it to train students.”

The solution also features a virtual simulator that can be used to conduct labs and run research projects which made it especially valuable in the pandemic because it helped the transition to remote education.

“Our devices are used to great effect at ITMO, St. Petersburg Academic University, as well as St. Petersburg State University, and are also planned to be purchased by the Lobachevsky State University of Nizhny Novgorod,” adds Mikhail Mukhin, a teaching and learning specialist at ITMO, who’s also in charge of the educational project at NT-SPb. “Moreover, the equipment is in demand internationally, with our laboratories used in Rome and Padua. We have also installed a large batch of devices at schools and the Kvantorium chain of children technoparks. And fairly recently ITMO and St. Petersburg Academic University have trained ten Kvantorium mentors from Russian regions with introductory lectures and practical skills of applying our nanolaboratories.”

According to Alexander Golubok, it’s such successful applications of the company’s solutions at schools and universities that allowed it to win the competition organized by Roscongress. Moreover, he points towards the fact that only a handful of Russian companies are engaged in developing equipment and not educational programs or online platforms.

“At least eight of the ten winning companies are working with online solutions,” he comments. “We were even told that it’s great to see such fossils as us, who are still developing hardware in the 21st century. But in our experience it is exactly this chance to “touch” the nanoworld by working on actual equipment that ignites a particular interest in students.”

Thanks to their success, the representatives of the company got the chance to pitch their project at SPIEF 2021 to garner new contacts and prospects for expanding their business.

“It’s all about networking – we got to meet vice governors of Russia’s regions who are looking to implement new technologies in education,” concludes Mikhail Mukhin. “But we are not counting our chickens before they hatch, so we will still have to see if this leads to something, but in any case this pitch gave us the chance to talk to the people we don’t normally get the opportunity to meet on a daily basis.”