Experts from NRW.Global Business Russia, the trade and investment agency of the German state of North Rhine-Westphalia were invited to this meeting. They discussed the possibilities of placing Russian companies on the European market. Green economy, sustainable development, and international cooperation between Russian and German businesses were key topics of the event. 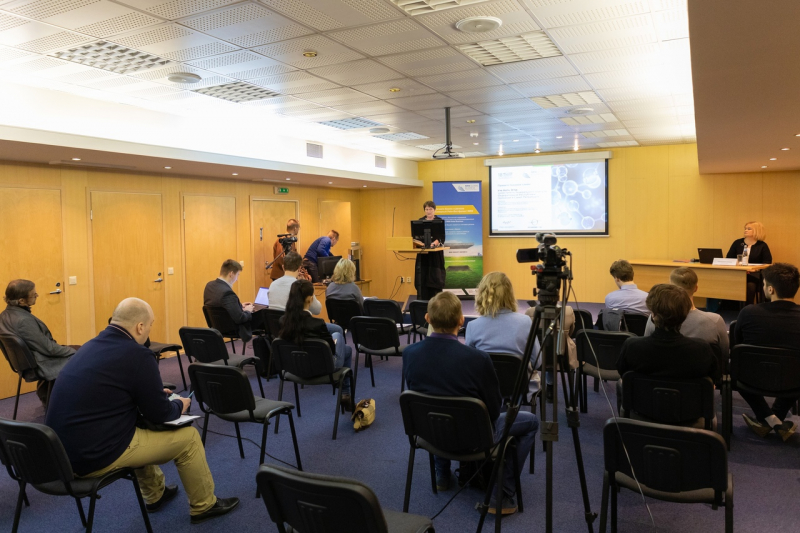 A picture from the seminar as part of the German Week in St. Petersburg

The seminar on sustainable development for a successful business in the North Rhine-Westphalia took place as part of the German week in St. Petersburg. According to Ute Katch-Egli, deputy consul general of Germany in St. Petersburg, such events are important for both Russia and Germany, as ecological and economical challenges of the modern world require joint efforts and cooperation.

“We are very pleased that during the entire German Week, all our ideas were received very warmly here in St. Petersburg. I would like to especially thank our long-term partners – NRW.Global Business agency and ITMO University. This isn’t the first time that we have held joint events and we are very grateful for the positive impulse for discussion of topics that we equally care about. The purpose of this particular event is to talk about the opportunities for investment and entrepreneurship in Germany, as well as discuss joint efforts in response to relevant challenges. For example, we’re talking about hydrogen technologies as part of a green economy – this is a hot topic in Germany. We would like to see these technologies become more widespread in order to achieve our common goal of climate protection,” comments Ute Katch-Egli.

Tatiana Kryachkova, deputy head of NRW.Global Business Russia, made a presentation on hydrogen economy  – an economy that relies on more eco-friendly hydrogen instead of coal, oil, or gas. She discussed Germany’s National Hydrogen Strategy that was launched in 2020, and about its implementation in the state of North Rhine-Westphalia, one of the main players in the field of switching to hydrogen technologies. The administration of this region aims to become a leader in hydrogen technologies among countries of North-Western Europe by 2025.

“The hydrogen economy is an example of an ecosystem in which Russian companies, startups, and innovative projects can find their application. The North region of Westphalia, as the industrial center of Germany, is a major consumer of hydrogen and a producer of hydrogen technologies. Together, we can achieve climate neutrality in production and life processes, as well as climate sustainability, ”says Tatiana Kryachkova.

Tatiana Schwarzkopf, head of NRW.Global Business Russia, shared that North Rhine-Westphalia not only makes a big impact in the transformation of the power industry, but is also considered a great region for entrepreneurship.

“In North Rhine-Westphalia, the industry is the driver of innovation for a sustainable economy. Many foreign companies and partners see this as an opportunity to cooperate and promote their projects. Our agency helps Russian companies and startups to take advantage of all the opportunities available in this region and enter the international market. Energy efficiency and renewable energy projects are especially in demand today,” adds Tatiana Schwarzkopf.

Alexandr Kapitonov, dean of the Faculty of Infocommunication Technologies and co-founder of Airalab and MerkleBot companies, has continued the discussion of sustainable development. He talked about a system for ecological monitoring based on blockchain technology. It allows any user to contribute to data collection using miniature detectors that can be placed at their houses or even carried around. Data processing takes place automatically via an independent platform – this helps avoid the risk of manipulation or incorrect interpretation of the results. The developers believe that such a system might change the field of ecological monitoring and make it more transparent.

“I have recently joined the work and became a member of the strategic committee, which is responsible for the development of e-mobility in Europe. This is about technologies of various sensor networks, energy delivery, and everything related to ecological transportation. Actually, we’re trying to establish certain standards and guidelines for the industry. Today’s event also fits well into this discussion. All these technologies are in high demand in Europe, so it makes a lot of sense to discuss successful European examples and the possibility of launching joint projects. After all, we also have something to offer – we are not inferior to anyone in the field of automated information collection systems, ”says Alexandr Kapitonov.

Alexey Shadrin, the founder of Evercity, a venture crypto fund in the field of the green economy, has shared another way to apply blockchain technologies to fund ecological projects. He explained what green bond is, how it can help fund ecological projects, how responsible investment works, and how assets can be evaluated using the Environmental, Social, Governance (ESG) concept. He also talked about the way Evercity and similar companies help re-organize the financial system in accordance with the Sustainable Development Goals using AI, IoT, and blockchain technologies.

From universities to international markets

Kirill Seredenko, head of ITMO’s Energy Club, talked about supporting startups and innovative technologies in the field of green energy. He explained how at ITMO, there is a unified ecosystem that includes the ITMO.STUDENTS community with its various clubs, ITMO Accelerator with more than 100 released startups each year, the OLIMP open laboratory, and FabLab digital fabrication laboratory.

Both student initiatives and technological and innovative entrepreneurs come together at ITMO Technopark. It’s a place for interaction between educational institutions, research organizations, and commercial enterprises that are engaged in the commercialization of scientific achievements and development.

Olesya Baraniuk, deputy head of ITMO Technopark, says that such events are one of the aspects of working with startups and their promotion.

“It has already become a tradition – over the past three years we, together with NRW.Global Business, have been organizing events about startups, their development, entering international markets, and in particular, we talk about interaction with regional development institutions in Germany. These events become a way to increase the visibility of participating startups. As a result, partners and funds from Germany contact them and invest or suggest cooperation.”