On September 11, the Faculty of Technological Management and Innovations at Chaikovskogo St. 11/2 will open its doors to guests of the modern art exhibition 2020 → 2070.The event will take place as part of a joint project by the RUSNANO Fund for Infrastructure and Educational Programs and the Frida Project Foundation. In their works, contributing artists muse on the next 50 years of science and technology. 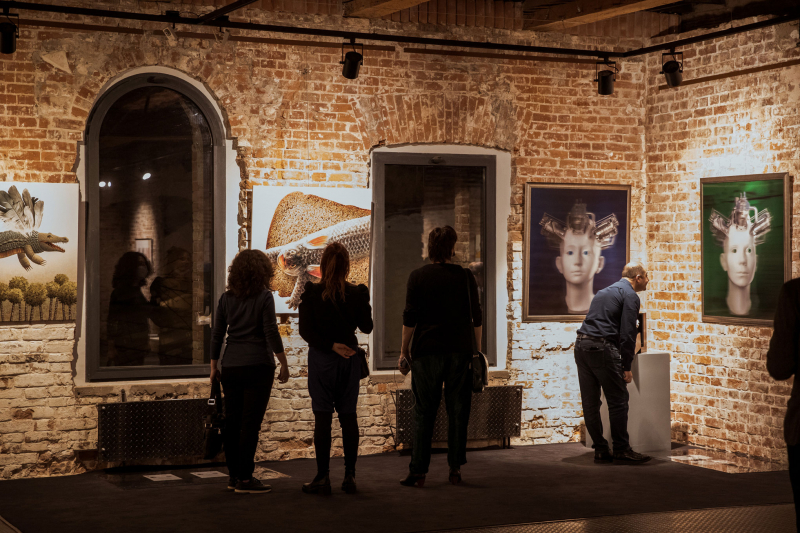 Biocompatible gadgets, new materials, revolutionary production, and human-machine relationships: that is the future as seen by artists whose works are now part of the 2020 → 2070 project, developed by the RUSNANO Fund for Infrastructure and Educational Programs and the Frida Project Foundation.

“I’ve been lucky enough to witness this project’s conception and take part in one of its launch events,” says Anton Gopka, dean of the Faculty of Technological Management and Innovations. “Our faculty trains tech entrepreneurs, and events like these are absolutely crucial in terms of how they influence our students’ personal qualities. They pose questions and show us that even the most familiar things may be very different from how we imagine them –  aesthetically unusual, yet harmonious. After all, a tech entrepreneur is someone who must always be looking for fresh ideas and inspiration, moving forward and making new products based on the ideas found in philosophy, science, and art.”

At the heart of the exhibition’s idea are the changes that will happen in our lives due to the development of science and tech. In the past 50 years, these fields have already produced radical changes in human life. Supercomputers now fit into the palm of a hand, wristwatches track biorhythms, cameras recognize faces, and trains run as fast as only planes once could.

The exhibition’s creators attempt to use art in order to understand which new changes will take place in the next 50 years.

“Why did we name the project 2020 → 2070? It’s to do with three artworks by one of its key artists, Erik Bulatov. At 87 years old, he is one of our nation’s most renowned modern artists and is one of the founders of the soc art genre,” says Mikhail Slobodinsky, curator of the exhibition. “For our project, he contributed a painting he did in 1970 of a skier walking away from the viewer. In another artwork, he depicts the same skier, but gives him some of these five decades’ novelties: high-tech skis, heart rate sensors, and a VR headset. The third image in the series asks what this figure’ll look like in another 50 years. It’s a sort of triptych and a puzzle – what else could we do to make this person’s life better?”

As the exhibition’s team explains, their intent was twofold: to draw the public’s attention towards science as well as to show scientists of today and tomorrow which desires are held by ordinary people; in which fields the denizens of Earth expect the next technological breakthrough.

“We came to Russia’s best-known contemporary artists and asked them to show which technological goals they believe are the most important and should concern young scientists,” explains Mikhail Slobodinsky. “Basically, the kids who now inhabit ITMO’s hallways will see these images and take in the artists’ message of which issues they should aim to solve. It’s a call for applications of sorts, a petition. For instance, we want scientists to look into the subject of aging. Therefore, at the entrance they’ll be greeted by an artwork, created by St. Petersburg-based artist Ivan Plusch, that depicts the first person to become fully digitized and abandon the physical realm.”

Another Russian artist whose works will be showcased at ITMO University is Roman Reznitsky, who had previously spent some time as a designer for the Zenit football club. The exhibition will feature an artwork of his that focuses on the importance of knowledge and learning in one’s life path.

“From the realm of advertising, he brought with him bright, clear lines and colors that catch the eye – the piece we brought to the exhibition is easy to interpret,” explains Mikhail Slobodinsky. “In the foreground, you’ll see a woman facing a book that she must climb over. Behind the book are the things we aspire to: love, an interesting job, popularity, the ability to travel. It’s quite plain to see: if you want to achieve something, you’ll need to make your way there using knowledge.”

The exhibition will continue throughout the fall season of 2020 at ITMO University’s building at Chaikovskogo St. 11/2. Entrance will be available to students and university staff during the building’s business hours. But not only members of the ITMO.FAMILY will be able to pay a visit.

“The exhibition is free to visit; its main visitors will be our students and anyone who has a pass. In light of the current epidemiological situation, others will need to gather in groups and book visits in advance,” explains Anton Gopka.

Those unable to visit the exhibition themselves can find out more about it on the project’s website where they can view some of the works and watch clips in which the artists provide more information on their creations.

The 2020 → 2070 has been around for about a year. Before its establishment, the participating artists were given tours of some of Russia’s leading laboratories at Lomonosov Moscow State University, MISiS, ITMO University, and other scientific institutions.

The artworks have already been put on display at several venues in Moscow, including the Schusev State Museum of Architecture and the MISiS campus. During the latest Night of Museums, which this year took place under quarantine conditions, an online tour of the exhibition attracted approximately a million viewers.

As noted by Anton Gopka, the collaboration between ITMO and the RUSNANO Fund for Infrastructure and Educational Programs is not limited to the organization of this event.

“We are collaborating closely,” he says. “We’ve got two joint innovative projects in the works: FlexLab, a printed electronics center where we work with flexible electronics and photovoltaics (solar cells, flexible screens, etc.) and Russia’s first university-based nanocenter.”