The event takes place as part of Ars Electronica, one of the foremost festivals of technological art. This year marks the first time that the festival takes place not only in Austria, but also at more than 100 locations around the world. 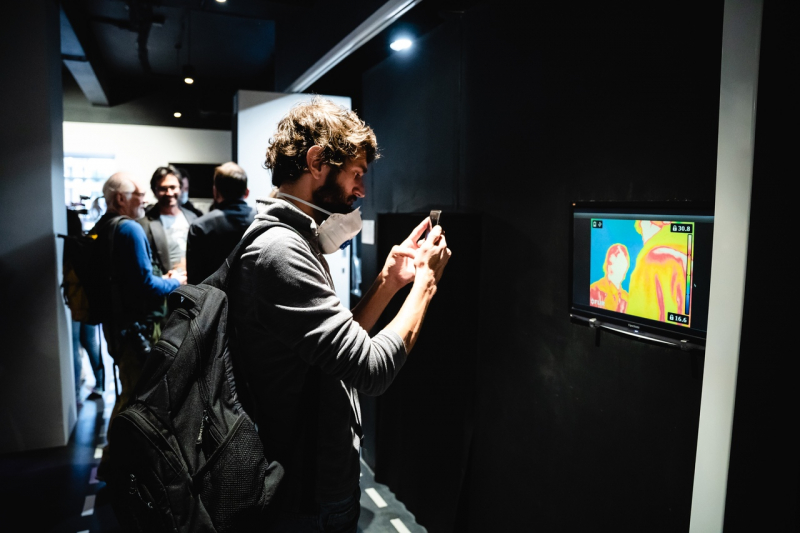 At the launch event for Pangardenia, a part of the worldwide art festival Ars Electronica

For over 40 years, the Ars Electronica festival has brought together artists and art aficionados in Linz, Austria. In that time, it has become one of the biggest events in the field of art & science not just in Europe, but around the world. In 2015, the event drew approximately 80,000 visitors.

The pandemic, which has scrambled the plans of many cultural events, affected the festival, as well. Instead of hosting a single event in Austria, its organizing team joined forces with partners around the world to establish a network of exhibitions in 120 cities around the world.

In St. Petersburg, the exhibition is organized by KURFUTURELAB with ITMO University’s Art & Science Center as a general partner. The result of their collaboration is Pangardenia, an exhibition of tech art that was recently launched at the new Art.ITMO.Residency space in Birzhevoy Pereulok.

“According to the festival’s team, they wouldn’t want Ars Electronics to go completely online and fade away there. Instead, they wanted it to “emerge” around the world,” says Artur Konstantinov, the curator of the event. “Our project, Pangardenia, consists of four gardens, each signifying a certain aspect of the city under lockdown. We started our research with Parniki (greenhouses) focusing on the initial, shocking stage of the global quarantine. The second section, Abandoned Gardens deals with abandoned gardens – those are all the institutions, once filled with life and people, such as museums and institutions, ITMO included, which emptied out as we moved our lives into the online world.”

The third section, Wandering Gardens, focuses primarily on water, which is the most crucial natural element of St. Petersburg and defines it as a locale. The final part, Post(non)human Gardens, is an attempt to catch a glance of the near future and find out how the lockdown and going online will change our lives.

“We demand space and void”

Overall, the exhibition includes works by more than 40 Russian and international artists. One of them is Petunias Are a Girl’s Best Friend, an installation by the artist Natalia Balabanova which draws inspiration from the pandemic.

“In February, when we still didn’t know much about what was going on, I realized I had this huge desire to plant something. I planted 500 plants at home. My first artistic action was to generate sounds using data related to seeds. All that data can be found on the packaging: when they sprout, how deep they must be planted, how large they are. These sounds were then played in the room to stimulate the plants’ growth,” explains Natalia Balabanova.

Now, the plants grown by the artist will be taken on a boat tour of the rivers and canals of St. Petersburg. At the venue in Birzhevoy Pereulok, there is a room being slowly filled up with green pixels. Next to it is a manifesto written on behalf of these houseplants that includes timely quotes such as “We demand space and void – we demand social distancing, safe contemplation, and the right to grow in any direction.”

Beside the works of experienced artists are the pieces developed by students and graduates of the Art & Science Master’s program. For instance, the increasingly popular art group BIOROBOTY 019 has presented the installation Chudo-Polyana 2.0 (“Wonder Meadow 2.0” – Ed.), which focuses on a unique area in the city of Gatchina where relict plant species face the threat of extinction.

“Here, we try to draw attention to these species, talk about them, and invite people to interact with them – touch them, smell them. The installation includes speakers and each platform plays actual sounds of the meadow, which is the contribution of the musician Anton Shchegolev, who helped us reproduce the sound landscape of the real location. You’ll hear bird songs, human voices, and such. But when you sit down next to a plant, these sounds disappear, allowing you to interact with it in silence. But there is another interpretation: when you sit down, you intrude on the plant’s ecosystem,” says Alena Koroleva, a co-author of the installation.

Another project by ITMO University students, titled Undergarden, asks visitors to look at a garden from an unusual perspective.

“Gardens to us are always what’s above,” says co-author Viktoria Gopka. “But a large part of any garden is the soil, a diverse environment that contains a lot more inhabitants than the surface. And we decided to create a space where there would be a lot of soil. The installation is tactile- and sound-based. The observer would enter the space, touch the soil, and listen to sounds that our sound artists have created based on field recordings of soil – all this will provide them with a new perspective on soil.”

The exhibition largely serves as the launch of the Art & Science Center’s new space. The Art.ITMO.Residency combines several functions – that of an exhibition center, workshop, and classroom.

“Our art residency is a hybrid space that is, firstly, a gallery where our students and graduates, as well as professional artists, can exhibit their works,” explains Aliya Sakhariyeva, head of the Art & Science Center. “It’s also a workshop where students can develop their projects and a residency for invited artists. This space is an entry point to ITMO University for the artistic community, and we hope that it will become a hot spot for artists and scientists and a venue for experiments.”

According to Daria Kozlova, ITMO University’s First Vice Rector, the fact that this new space begins its history with an event of such a scale is very important.

“This shows that ITMO works at the speed of light and we were able to quickly prepare for Ars Electronica,” she comments. “We always say that we need to create new things and come up with new technologies and services; ITMO always focuses on what’s beyond the horizon. It’s important for this place to be a modern educational space: there are no desks here, no stage; everyone is equal and everyone is mixed together – and that’s the goal of ITMO’s development: to mix, to promote interdisciplinarity, and to create new things.”

“On September 11, from 11 AM till 2 PM, we’ll conduct a joint project with a team of ITMO scientists and engineers headed by Alexandr Kapitonov. Together with artists, curators, scientists, and an environmental specialist we’ll get on a boat and sail the rivers and canals of the city,” says Artur Konstantinov. “Our boat will be accompanied by a non-human agent – a water-based ecodrone that collects data about the quality of water. We’ll be discussing water as the most important part of the urban ecosystem, exploring it from various perspectives, and studying its surface and underwater gardens.”