How To Overcome Fear and Appreciate Viruses: Staying With the Trouble Exhibition at AIR Gallery

Starting from March 12, Art.ITMO.Residency presents an exhibition of world-renowned artists, for many of whom it is the first time they present their works in Russia. Visitors will also have the chance to see a new project by Heather Dewey-Hagborg, the famous American bioartist. 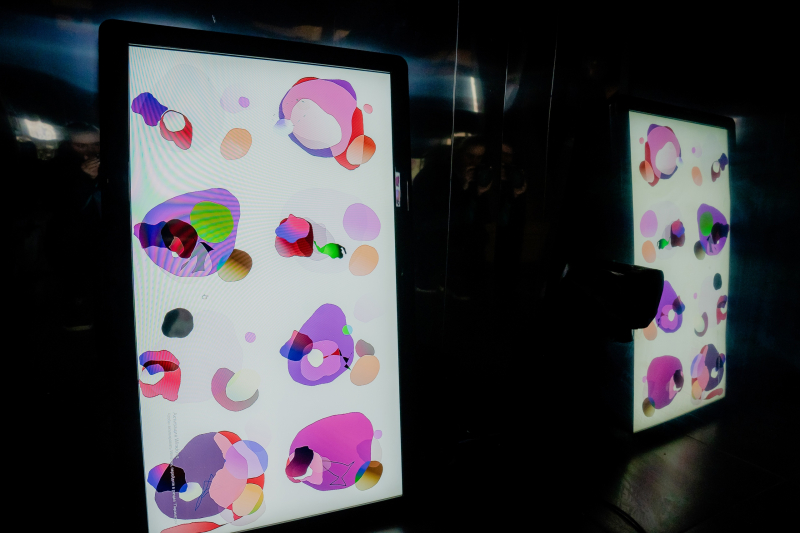 The exhibition will run till April 4 and include daily art mediations (please see the schedule) and an extensive educational program, which will bring together scientists from ITMO University, experts in virology, and art critics from the State Hermitage Museum. Some of the participants will also deliver artist talks on their projects. To take part in these events, please sign up here.

The key theme of the Staying With the Trouble exhibition is a reflection on the pandemic and a rethinking of the role of viruses in our lives. The artists were challenged to meditate not only on the destructive nature of viruses but also on their meaning in the origin and evolution of species. Thus, they shifted the focus from hostility to creation. The main goal was to help people overcome the fear of viruses and the pandemic.

“I was inspired by our conversation with Laura Rodriguez, the co-curator of the exhibition. We talked about returning to life: everyone experiences pandemic fatigue yet is still worried about the situation even if they’ve got vaccinated. We believe that the virus remains mysterious not only for scientists but also for philosophers. That’s why we decided to suggest this topic to artists and see what they come up with. Rather than talking about COVID-19, we explore viruses as an integral part of our life and demonstrate that they can bring not only disease and grief but also positive changes,” comments the exhibition curator Khristina Ots.

The exhibition brings together both fledging and experienced artists. Most of the works were created specifically for this exhibition, for example, the project by Heather Dewey-Hagborg, the famous American researcher, artist, and biohacker. Others were brought to Russia for the first time: for instance, a miniseries by Neil Beloufa (2014), which features the creator’s reflections on pseudoscience and fake news, as well as coincidental predictions on 2020, or an ongoing large-scale project on the mutation of tulips by Anna Ridler.

“We appreciate that every artist from Russia and abroad accepted our invitation, so that we had to open a new space. We offered the artists to explore it and transform into total installations,” says Khristina Ots. “For example, we spared a room for karaoke – this is a final zone where visitors can celebrate the end of the pandemic and welcome the post-pandemic life. Ironically, as we’ve just found out, we launched our exhibition on the same date the WHO announced the pandemic a year ago.”

Staying with the trouble

The exhibition’s title refers to the eponymous book by Donna Haraway. There, the author addresses the coexistence between humans and other living species on Earth – including non-cellular ones – and speaks about the need to rethink and reconstruct these relationships. In their works, the artist attempts to map our proximity to viruses. By means of various mediums such as video art, performance, VR, and involving practices, the authors explore viruses from scientific, anthropological, and poetic perspectives.

In her Virophilia project, Pei-Ying Lin, an artist from the Netherlands, turns to the latest discoveries of useful viruses – those that are part of our microbiome or essential for our survival. Inspired by this idea, the artist created a cookbook with the flu virus being the key ingredient. But she didn’t stop there and presented a food delivery service of the 22nd century with lab-created and aesthetically pleasing dishes that promise consumers to boost their immune system and help avoid seasonal diseases.

The topic of useful viruses can also be traced in the Phage therapy project by Nadezhda Bey, a Master’s student of ITMO’s Art & Science program. This is a VR-drawing project, which allows the audience to see with their own eyes the interaction between a bacteriophage and Staphylococcus aureus and thus relive the life cycles of the virus from within the microcosm.

Heather Dewey-Hagborg offers visitors to experience empathy towards a virus. Her Viral time project explores the topic of the relativity of time. Some studies show that small organisms have a different feeling of time, for instance, flies see us in slow motion. The artist tries to imagine how viruses can perceive the flow of time and chooses poetry as her main media.

Virus as an evolution driver

The exhibition developed the idea of viral mechanisms being the main generators of the evolution of life on Earth. The authors are looking for ways to adopt this idea to both their artistic practices and sociological and technological processes in general.

Thus, a St. Petersburg artist Lera Lerner created a performance, in which she imitates a virus and “infects” the space around her. “I enjoyed the way curators see viruses: an equal part of life on the planet that we co-evolve with rather than something people should fight against,” she says.

“I’d call my performance practices viral as they bring a special touch into everyday life, change people’s behavior, and interact with spaces,” the artist adds. “Usually, there are certain patterns in dialogs and if something stands out, it is called madness. In my case, I prefer pieces of clothes that cause spontaneous communication in urban areas and make it possible to change the reality. My project called Species is a flickering dance D connecting tribe and clan consists of a video recording of a dance based on the codes of my behavior and personality, and created in order to infect the gallery space. The project will be performed once. All my works are site-specific and fully anchored to the space and context.”

Over the past few years, an English artist Anna Ridler has been collecting a database of over tens of thousands of tulip species. The virus that creates a specific pattern on the petals is called Mosaic – and it is the one that caused the Tulip Mania back in the 17th century and led to one of the major economic crises in Europe. Anna Ridler’s video draws an analogy between historical events and the present: the stripes on the tulips react to Bitcoin price rises and falls, demonstrating cryptocurrency hysteria and speculations.

Considered a yet unknown topic, viruses became the perfect breeding ground for speculations. For example, Natalia Tikhonova created a sci-fi narrative based on the theory of the origin of humankind as a result of experiments of “extraterrestrial computer civilizations”. Her YouTube video mixes conspiracy theories with realistic descriptions of tech innovations and cultural revolutions and ends with a fantasy vision of human decay, where only mutations can save our civilization.

Another speculative project was presented by the famous Russian iBiom team. The exhibition’s launch coincided with an open day at the Institute of Fatigue founded by the artists. Anyone wishing to study the new science of sociovirology based on the works of Samuel Diaz Munoz, a professor of microbiology and molecular genetics, can sign up for the course. In his research, Dr. Munoz analyzed virus-cell interaction along the lines similar to that of humans. As noted by the artists, the Institute of Fatigue was opened in 2020 as an independent project of the iBiom team in response to the problems of a tired society.

“Now, we’re starting an admission campaign for our new program. Professor Diaz Munoz and his colleagues discovered that many viruses behave as a society: there you can find mutual help, altruism, cooperation, competition, and even cheating. We wanted to see how viruses communicate with one another and find ways to apply this knowledge to humans. Sociovirology is a cutting-edge scientific field that requires further development. We opened the program to start building a community around this new science. We moved away from practices of classical universities by giving our students the freedom to choose their courses and eliminating the assessment system – and  there’ll be no diplomas after the course,” explains the artists of the iBiom team.