The exhibition was devised by students of the Master’s program Science Communication and the curator Olga Remneva in collaboration with some of the university’s own laboratories. The event offers members of the public an opportunity to explore the world of science through works of visual and audio art. The event will run until December 24 at the Art.ITMO.Residency (St. Petersburg, Birzhevaya Liniya 16). 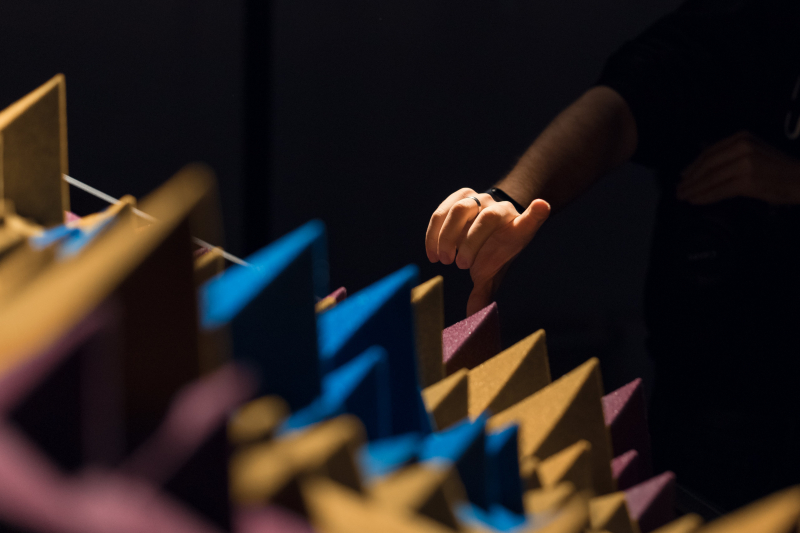 The Principle of Collaboration exhibition at ITMO University

The exhibition’s aim is to showcase how creative methods and art practices can be used to promote science, show what goes on at laboratories, and highlight the results of scientific research.

“What we have is a collaboration between science and society, science and art, science communicators, researchers, laboratories, and project authors with their teams. Putting this exhibition together, as small as it may seem, involved many different departments of the university – and that’s collaboration,” explains the event’s name Olga Remneva, the exhibition’s curator and science art expert.

ITMO students created the exhibition as part of their  course Art and Natural Sciences: Theory, Aesthetics, Discourses, taught to students of the Master’s program Science Communication. During the spring semester, the students learned about the theoretical aspects of science art and worked on concept tasks; for the second half of the course, they partook in practical training. Having gained some knowledge of the relationship between science and art, they came up with their own creative statements – which they then presented at the exhibition.

According to Daria Denisova, head of ITMO’s Center for Science Communication, the program’s students closely collaborate with the university’s various laboratories every year as part of their studies. This year, the large amount of ideas – and opportunities to implement them – led students and staff to create the first such exhibition.

“It’s very important for us to give students a chance to create unusual projects. The tools, the images, the language of art – all these are means of going beyond the traditional way of thinking, which is a very important skill for a science communicator,” she says. “To find your way to the public’s consciousness, you need to know how to relay information in different ways.”

According to Olga Remneva, it’s also important to make sure that the students’ projects can reach a wide audience.

“In this case, we wanted to show that science communication can be creative and informal; to apply the principles of communication in an exhibition space and show new ways of presenting science to the public,” she explains.

For instance, visitors of the exhibition will be able to learn more about ITMO’s labs, find out the purpose of ultraviolet spider webs, learn why researchers study digital organisms, and understand how anechoic chambers work.

The exhibition includes projects by five teams of second-year students. All of the projects share a desire to use artistic tools to show what goes on behind the closed doors of scientific laboratories.

The sound of a lab

Students Alexey Goyan, Marina Radchenko, and Valeria Sukhanova worked together with the staff of ITMO University’s International Laboratory "Applied Radioengineering" to recreate the lab’s workspace using sound. After visiting the new anechoic chamber at the Faculty of Physics and Engineering, the students felt compelled to work with sound as well as shine some light on the researchers’ working process.

“Even if you can get into the lab, you won’t understand what goes on in there. The researchers use a complex lingo full of puzzling terms and metaphors, accompanied by the sounds of various mysterious devices,” explains Marina Radchenko.

The project was dubbed Inside-Outside. Its creators recorded sounds at the lab’s workspace, rec room, and the anechoic chamber. Visitors can listen to these recordings and try to guess what went on in these rooms – and what makes up a research lab.

“We want to show that scientists are regular people who talk to each other, connect equipment, and type things up. They do the kinds of routine tasks that anyone would be familiar with,” says Marina Radchenko.

The project’s visual element consists of a sheet woven from a porous material – soundproof foam, the kind used in the anechoic chamber. Different parts of it look differently: the flat ones represent silence, while the pyramid-shaped ones indicate sounds. Sections of the board represent the different areas where sounds were recorded: blue for the anechoic chamber, yellow for the rec room, and purple for the workspace.

Students Christina Eremenko, Ekaterina Yudaeva, and Yulya Alentyeva joined forces with the staff of the Laboratory of Evolutionary Calculations at the International Laboratory "Computer Technologies". The result? A project called Hubris that transports the bacterial world into a digital environment.

“Hubris is an ancient Greek word that describes the kind of arrogance that leads humans to try and surpass gods and rule over nature. It’s an ambiguous term and even today philosophers argue over its meaning. And it’s as relevant as it’s ever been. For instance, postmodern studies scholars use it to describe humans’ inability to perceive the consequences of their actions on the environment, be that the society or nature,” explains Ekaterina Yudaeva.

The project’s creators used evolutionary algorithms – a type of AI inspired by the process of natural selection – to model the evolution of bacteria. Scientists use such algorithms to optimize the function of various structures without the need for human intervention or countless experiments.

The evolutionary model used for the project was written by Maxim Buzdalov, a world champion in programming; the authors suggested that he enhance the basic model with new factors – such as the ability to “place” the bacteria into a nutrient-rich environment or, conversely, to kill off part of the population.

This way, the exhibition’s guests will witness the consequences of their actions in real time via the example of bacteria – which, though they only exist in digital form, behave just like they do in real life.

“Evolution is a lengthy process; we can’t always understand the effects of our actions right there and then. In our project, it’s instantaneous. The results of “playing god” are unpredictable: the bacteria might eat each other, one population might displace the other, or they might share the territory and resources peacefully. Just like in real life,” says Ekaterina Yudaeva.

Creators of the Process: Science project – Anna Soboleva, Ekaterina Kurakova, and Elizaveta Savchenko – decided to focus on scientists’ routine and the impact of their work. A film shot in collaboration with ITMO’s Infochemistry Scientific Center gives viewers a glimpse into everyday life at the lab.

Its subject matter are the routine processes that, day by day, bring scientists closer to results – such as articles or new materials, some of which can also be seen as part of the exhibition. A screen depicts the production process of a polyelectrolyte hydrogel used to create flexible biocompatible electronics.

Nearby on the wall is a clock, counting down to the approximate time it’ll take scientists to make another discovery. The clock is a symbol of the time that researchers invest into their scientific breakthroughs.

The next project’s authors theorized that scientists go into science to find solutions to phenomena that concern them. Their project is a 20-minute film that seeks to find out how to create a robot that wouldn’t suffer from the uncanny valley effect – a feeling of unease we feel towards artificial faces that look nearly human, but not quite. The students visited ITMO’s Youth Robotics Lab and asked its staff and students six questions about their fears, robotics, their favorite robots, and the uncanny valley.

Students Anastasiia Kuznetsova, Yulia Gryzlova, and Natalia Vinokurova partnered with the Ceramic and Natural Nanomaterials Laboratory at the SCAMT research institute. Their project, Tenet.Inside, combines the internet, neural networks, and spiderwebs to show the formation of a shared collective consciousness – a space for unrestricted exchange of information. At the exhibition, they presented partial neurovisualizations of brain functions and spider silk embedded with quantum carbon dots. Together, these elements create a visual representation of the human brain in which activity can be traced through light signals that correspond to neural signals.

On working with scientists

One of the most important features of the Master’s program Science Communication is the opportunity for students to interact with scientists and laboratories – not only at ITMO, but all around the world – for different purposes, such as when developing projects at the intersection of art and science.

“While they were working on their projects, the students worked with scientists to figure out what interests the latter, as well as what they, the students, would like to share with the world. They maintained a dialogue between their own visions and what the researchers found important to highlight. That’s why each of the projects is a humanization of science; a friendly, considerate look at it and an attempt to find the principle of collaboration between science and society,” says Olga Remneva.

In addition, all second-year students now have an art project to add to their portfolio.

“Our Master’s program includes courses that concern the practice of promoting science through creativity and art. Museums and exhibitions occupy a special place in the process of communication between science and society. That’s why we value our program’s interdisciplinary context so much. Thanks to the Art.ITMO.Residency’s launch this year (and we’d like to thank our colleagues for entrusting it to us), the students now have the opportunity to present their own works,” comments Daria Denisova.

She adds that while working on the exhibition, the students tried to capture the scientists’ emotions, impressions, and signals and channel them into sensitive, emotional objects accessible to the wider audience. The result is a comprehensible overview of what’s happening in the academic world and ITMO University especially.

“The fact that science communicators are making a project about evolution with a world champion in programming, or going to an anechoic chamber or an infochemistry lab to capture an impression of the the imperceptible academic culture – and then use that to create these complex, fascinating images – is an important sign and an admirable result for our program,” she concludes.

The exhibition will also include a series of educational events (in Russian) on December 17: an online lecture titled Inside-Outside From Within, during which Marina Radchenko will take the audience behind the scenes of her project; another lecture, titled Dissecting Anthropophobia, will have Emma Mesropyan and Ekaterina Smelaya, authors of the Robot Anthropophobia project, discuss the evolution of their idea and its implementation. Finally, the lecture titled Tenet.Inside and Hubris will feature the creators of the two eponymous art projects featured at the exhibition.

Visitors must sign up in advance in order to visit the exhibition (in the art mediation format) or attend the lectures.