Art Project as Thesis: How to Graduate With a Work of Art

Last year, ITMO University’s Art & Science Center launched the Art Project as Thesis initiative. Graduates of the university’s Master’s program – regardless of their subject of study – are now able to receive their degree by developing an art object at the intersection of science and art. Today, we examine the first results of the initiative, review this year’s changes, and explain how to apply. 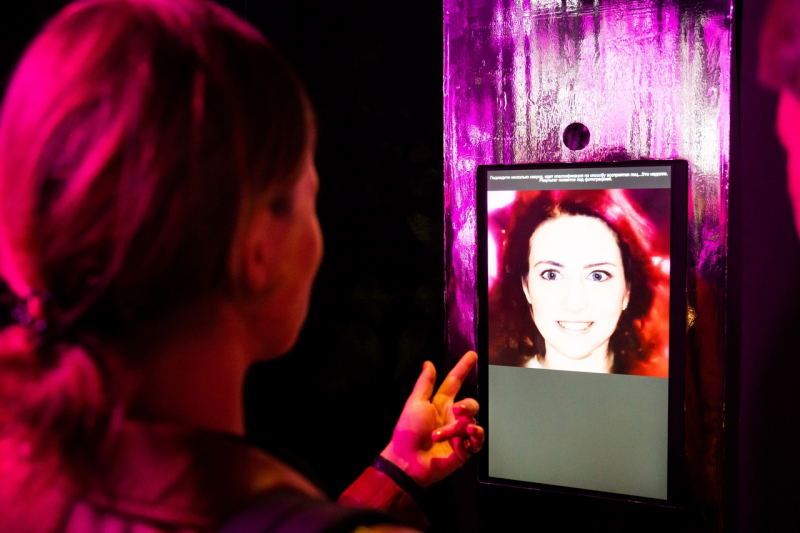 N-Tracker by Yulia Anikienko and Galina Alferova. Photo by ITMO.NEWS

Art Project as Thesis allows graduates of Master’s programs from any subject area to defend their thesis by presenting an art object that will also be exhibited at the Art.ITMO.Residency (AIR) gallery.

Only teams can participate in the initiative. However, the participants can represent different subject areas and even different years of study. This graduation thesis format is available even to students who are not artists and whose studies are not closely related to art.

This is a chance for anyone to try their hand at the novel field of science art, showcase their research from a new perspective, and expand the ways in which they can apply their newfound knowledge and skills.

“We don’t expect to only see students who already possess in-depth knowledge of art history. The initiative is a way to let students use their professional competencies in a novel field. Our program’s mentors will work with them and assist them in developing the project’s artistic side, while the participants themselves need only have an interest in modern art, a desire to share their findings with the public, and an openness toward new experiences,” comments Khristina Ots, the curator of AIR gallery and a member of the expert review board for the Art Project as Thesis initiative.

In 2020, the program received applications from 17 teams made up of students from different educational programs. The experts picked four projects to be implemented, with two making it into the finals. This May, the graduates showcased their works at AIR gallery as part of the STAGE exhibition.

Graduate Yulia Anikienko and then-first-year Master’s student Galina Alferova developed the N-Tracker project, which is dedicated to the self-concept and personal discovery: every individual “dissolves” into others by adopting their habits, behaviors, and gestures. As the visitors interacted with the installation, they could become aware of that concept as a neural network fused their image with those of previous viewers. The result was a portrait of someone who doesn’t exist, but still remains familiar to the observer.

“The difficulty was in making the technical and conceptual parts work together. We initially had other ideas, but there were issues with the first part – it would have required a lot of processing power. So we started thinking about other options and found this one,” says Galina Alferova.

The artists’ first idea was to use eye-tracking technology to allow viewers to create their own images. After several meetings with experts, they decided to change the project’s direction by using neural networks.

“At the start of the project, I was afraid we’d have to build the neural network from the ground up and we would run out of resources. But we ended up using an existing one, though we still had to learn a lot of theory. Our network would combine several people and create their “ancestor” while taking age into account, but it needed a powerful computer. We managed to find one at ITMO, and that’s where Aleksei Feskov (the Art & Science Center’s technical consultant – Ed.) really helped us out. Other parts, such as a high-definition webcam and a neural network that monitors eye movement, were also found here at the university,” says Yulia Anikienko.

Mikhail Shalepo, a student of mechatronics and robotics, and Alexander Shevyakov, a Master’s student at the Faculty of Secure Information Technologies, created KISONEM, an art installation that demonstrates empathy towards people. Using cameras and a number of neural networks, the machine monitors the emotions experienced by viewers. In response to these emotions, it changes its internal geometry and lighting as if it were a living person, as well.

According to Mikhail, the project required a large amount of funding (approximately 100,000 rubles) as well as processing power. ITMO University’s Faculty of Control Systems and Robotics expressed interest in the project and partially financed its development, while the ITMO FabLab provided equipment.

“At first, I was afraid because I wasn’t sure whether my project was actually art. To me, it was a flight of fantasy, an opportunity to tell people about robots, to plant a question in their head that kept bothering me, and to learn something for myself, too. But I’m an engineer and I’ve never worked in the field of science art before. I got a lot of help from Maria Moschenskaya (a curator of the Art Project as Thesis initiative – Ed.) and Aleksei Feskov, who channeled my thoughts and supported me along the way,” says Mikhail Shalepo.

Starting this year, the Art & Science Center now also offers project funding of up to 25,000 rubles. As explained by Lina Kipriushina, the coordinator of the Art Project as Thesis initiative, the expert committee will grant funding to projects with profound artistic and technical or scientific qualities.

The organizers have also introduced a series of lectures for participants that will help them learn more about the field and the initiative. All announcements can be found on the center’s VK page. Lina Kipriushina also notes that students can expect more of these events in the future.

How to choose the right topic

There are several criteria for the applicants’ art projects: students must make use of cutting-edge technologies, act on scientific findings, and have an original artistic concept. Remember, science-themed posters are not yet an Art & Science project.

“The principal reason for rejection is an insufficiently developed concept or an idea that has been repeatedly and more successfully implemented earlier. To prevent this, we recommend you to consult with the members of the expert committee and make sure that your concept offers a new look on pressing issues,” says Lina Kipriushina.

The organizers also advise students of technical disciplines who have a hard time picking a topic to choose a scientific study and think on how it can be implemented with the help of software, algorithms, or equipment. Another way is to reflect on challenges, say, social or personal, and interpret them using technological skills and knowledge.

The projects will be evaluated by an expert committee that consists of artists and curators, as well as a State Examination Committee that will also involve specialists from other fields. The contribution of each student will be assessed individually based on their competencies.

“Students will be assisted by their supervisors and reviewers, as well as curators from the Art & Science Center who will help them with the artistic part of the project,” comments Khristina Ots.

To participate in the initiative, students must fill out an application form before November 10, 2021 where they describe the concept of their artwork, its scientific and artistic aspects, team members, as well as equipment and materials they plan to use in their work. Audio-visual materials, such as prototypes, sketches, and references, should also be attached. The results of the first stage will be announced on November 25, 2021.

Feel free to contact Lina Kipriushina if you have questions concerning creative and organizational matters and Aleksei Feskov via the Telegram channel or art@itmo.ru if you have questions regarding technical issues. Subscribe to the Art & Science Center’s newsletter to find like-minded people for your team and learn more about the initiative.