The three-month course at ITMO's Technology Brokering School has come to an end; last Monday, its graduates presented their projects to an expert jury. Which projects got into the finals, how the School will continue to develop and what the Fundit Fundraising School is about - read that and more in our article. 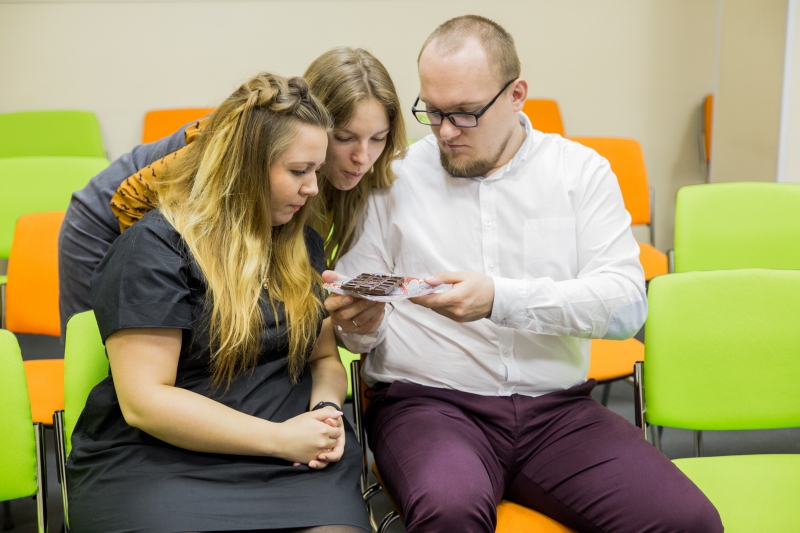 It often occurs that investors and university professors can’t really understand each other. As of now, it seems that effective communication between universities and enterprises is only possible with the help of technology brokers - specialists who possess particular competencies that allow them to put enterprises and developers together. Every technology broker should know the instruments for commercializing research, be good at finding the necessary contacts in both scientific and industrial fields and conducting marketing research, understand the road maps of each of the involved parties, have skills at drafting commercial offers and a good understanding of the economic processes of an enterprise - in other words, a technology broker has to know everything that has to do with promotion of innovations. The Technology Brokering School at ITMO University trains its students these skills, so that they can make the university's research and innovations comprehensible to an investor.

Previously, the School conducted three-day workshops where its students got the opportunity to develop a full-fledged project. This time, the School launched a new pilot project - a three-month practical course on its students’ projects followed.

"It happened that we allowed and even proposed our students to come with their own technologies, which they gladly did. Thus, our students have both the understanding of the technologies they work on, and experience of commercializing it. In future, we plan to work only with the university's technologies and create teams that will develop something absolutely new," comments Igor Kuprienko, head of ITMO's Project Activity and Fundraising Unit and the one responsible for the practical education at the School of Technology Brokering.

Not just ITMO's students can attend the School - anyone can apply for the course on a competitive basis. "I work on renewable power generation at a research institution, and do several projects there. I came to ITMO's Technology Brokering School with no particular idea or team; it was there that we've gathered and decided to look for a project. We decided to work as pure technology brokers: gathered a team with particular competencies and found a project that suited us, or, more exactly, a specialist who wanted to introduce his idea," shares Alexander Nikitin, one of the School's graduates who presented a project on stimulating the cultivation of fruit crops saplings.

During the graduation event, the School's students presented their projects for ten minutes each, showing their inventions, marketing research, device prototypes and answering the questions of the jury, who gave feedback on each project's strong and weak sides.

The authors of the first projects explained how important it is to track the content of gluten in flour. Gluten is a protein that is responsible for the elasticity of dough. The more gluten the flour contains, the more expensive it is, hence the bread from it is of better quality. Flour vendors who supply bakeries often declare a higher content of gluten in their flour than it actually is. As result, cheap flour becomes more expensive.  Thus, bakeries have to conduct analyses and, if they don't have a laboratory, rely on third parties, which is also expensive. The Glutyzer team proposed a device for express analysis that can check the content of gluten in five minutes. The laboratory prototype works as follows: one puts flour into the sensor, where it’s heated to 70 degrees Celsius so as to attain the required electric capacity; then a unique formula is used to calculate the content of gluten. Now, the team will be searching for funding so as to create a fully-featured prototype and then the end product. Nikolai Babin, representative of the second team, proposed a project on speeding up the baking process by using ultrasound. He explained the modern bakery methods and pointed out their common problem - extremely high energy consumption. The team's members presented an ultrasound technology that allows decreasing the time spent on baking and the costs by the 30%. For the device's prototype, the team constructed a module that can be fixed into a commercial oven.

Technology for stimulating the cultivation of fruit saplings

The third team stressed that only 7% of fruit crops that are sold in the North-West are cultivated in our region. Its members conducted a marketing research and proposed a technology where saplings are first cultivated under cover so as to pass the hardening period. They offer farmers a collaboration, which includes consultations at all stages from the start of the project to the point of final sales, as well as building a special greenhouse for the saplings and managing the whole process.

Getting protein concentrate from lupine flowers

A member of the fourth team explained how one can extract protein from lupine - a plant that is considered hogweed by most. In other countries, scientists already actively work on getting protein from lupins, yet in Russia, no one does this kind of research, even though Russia has to import protein. According to the project's team, there is a high demand on protein in Russia, which is why many companies work in the field of producing vegetable protein. The Research showed that getting protein from lupins is two times cheaper than from soy, its shelf life is longer and quality - better. Protein from lupins can be used in dairy production, sport supplements and baby formula. As of now, the team is looking for funding to organize lupin flour production.

This project had to do with low-height housing construction. Its team's presentation was on the advantages that using the wood-plastic composite (WPC) panels gives. According to the graduates, nowadays, structural insulated panels (SIP) are often more popular with builders.  Though they are cheaper than WPC panels, their quality is low, thus the lifespan of houses built from them is three times less. As of today, the team is looking for funding so as to create a WPC panel prototype and try it in practice. This project aims to help manufacturers of polymer films simplify the dyeing process. The Corona generator is a high amperage generator that is used in different fields and production processes. The team plans to use it in a technology for dyeing polymer films and plastic surfaces. As of now, there is only one company in Russia that develops such generators. The team’s prototype generates a specific charge to remove the static electricity from the film and thus eases dyeing. The problem many polymer film manufacturers face is that they have to buy foreign equipment from China and Taiwan. Such equipment is not expensive, yet it's unsafe and breaks often. As we do not have maintenance services here, the manufacturers have to buy it in store. With their new invention, the team aims to solve these problems.

Alexandra Toropova presented a project on confectioneries that make use of optical technologies. The graduate decided to combine her hobby with her research field - marzipan and photonics, and then started experimenting on using holographic technologies for caramel and gelatin. One can use holographic technologies to get bright and complex images without using coloring agents, also, it is a whole new way to decorating confectioneries that is yet to be introduced on the market. For this technology, a diffraction grid is used: one takes a silicon cast of it, prepares the material, then pours it into this form and gets a diffraction grid on the food material's surface. After the presentation, Alexandra treated everyone with sweets and chocolates with holograms. What will change about ITMO's School of Technology Brokering

The organizers plan to further improve their three-day workshop that can now be extended so as to better complement the student's practical activities. What's more, Igor Kuprienko plans to launch a distant education course.

"Between the three-day workshop and three months of practical work, there was a brief pause, yet students started to forget some skills. We want to extend the workshop and focus it more on case studies: invite representatives from those companies that took some technology and applied a full range of technology brokering instruments to it." shared Igor Kuprienko.

The course will become longer, and include distant education; what's more, the only projects one would be able to work on at the School will be those created at ITMO University.

Not only the School of Technology Brokering is undergoing change. The Fundit Fundraising School also changed its format.

"Before the launching of a project management institution at ITMO University, Fundit was an educational campaign on working with different grants the university is part of. We explained how can one find his way among the many foundations and grants, apply for them and the like," shares Nikolai Bovtunov, head analyst of the Project Activity and Fundraising Unit.

Then, for some time, we closed the school, yet last year we've decided to restore it due to the many requests by different Schools and departments. This year, we're launching the second Fundraising School in a new format. It will be a huge event that will gather lots of people.  Yet, as opposed to the School of Technology Brokering, this event is for ITMO’s staff and students only. The first session will take place on April, 12, at 5 pm in room #301/5 on Birzhevaya, 14.

It will focus on classical mistakes often made when drafting an application form. For the following sessions, the topics will be more specific: research grants, grants for young scientists, Commitee for Science and Higher School and UMNIK programs and how to apply for them.

"We will share about commercializing research, as we have accelerators and other instruments for attracting investments. We will also explain how this is all organized at our university and how it works.  We have to promote our university's inner services, as there's a communication problem: not everyone knows that we offer such opportunities, and we want people to know about them, that they really work, that we are ready to help and do it free of charge.  There are people who already work in laboratories, and those who just started. Sometimes, when one needs to ask some questions, those who can answer them can't find the time and place to do that," shared Nikolai Bovtunov.

The Fundit course will consist of five sessions on theory, three hours each, and two or three practical sessions on writing applications.  The organizers and students will go through the whole project and draft an application; according to Nikolai Bovtunov, the ideal result of training is when a student participates in a real contest and his application wins.