The future of the banking industry becomes increasingly interconnected with biometric technology. Sberbank has already started implementing the latest technologies in this field and collecting its clients’ biometric data. Experts estimate that two million bank clients will use biometrics by 2020. This is the main focus of the Interface project conducted by students from ITMO’s Faculty of Infocommunication Technologies. The project even got the prize for the best creative solution at the Fintech Cup-2018 Championship. In this interview with ITMO.NEWS, the students share their thoughts about the future of biometric data. 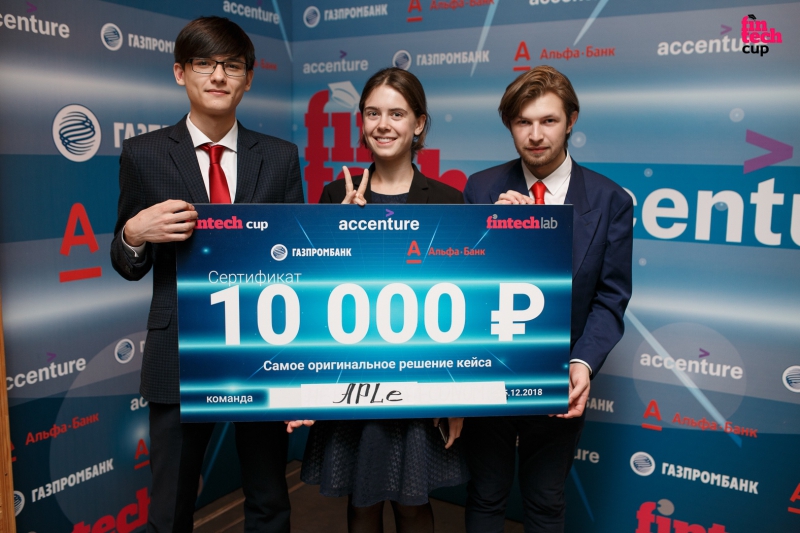 Fintech Cup is an annual championship for students organized by the Fintech Laboratory. The competition brings together Bachelor’s, Master’s and PhD students from different universities from all over Russia; they are offered to solve real-life tasks in the field of financial technologies with the use of business-analytics and programming.

ITMO University team called APLe received a task from the Accenture consulting company, which helps its clients with strategic planning, as well as business processes outsourcing. The task was to develop an innovative banking product, which could be sold to clients and businesses.

The team was made up of students from the Faculty of Infocommunication Technologies Valeria Stromtsova, Artemiy Magarin, and Petr Revyakin. They came up with the Interface project, a money transaction system based on facial recognition technologies. All you have to do is to direct a camera to a cardholder’s face, then the application recognizes it and transmits the data to the server. The neural network checks the face against the database and approves or rejects the transaction. The main advantage of the new method is that it protects users’ personal data such as their card and phone number.

The idea is easily implemented; some banks have already started collecting their clients’ biometrics.

“My granny has recently told me that the banking officers have recorded her voice and photographed her face,” shares Valeria Stromtsova. “She’ll soon be able to withdraw cash from a cash machine without a card. Sberbank has already installed some of the new machines in St. Petersburg metro. According to experts, by 2020, about two million people will be transferring money using their biometric data.”

The students haven’t yet developed a prototype of their system, just a visual concept. They say that if given more time, they would have made a demo version and shown the facial recognition process.

At the Fintech Cup Championship, the project received mixed reviews. The Accenture company have mentioned the situations in which the system could come in handy. For example, using this tool, you can transfer money very fast. The flipside, however, is that this system can prove insecure: for instance, you can take pictures of people in the street, transfer them money and then find out their card numbers in your account statement. This didn’t prevent the students from receiving the prize for the best creative solution though.

“This was the first time we took part in the Fintech Cup Competition,” says Artemiy Magarin. “Other participants demonstrated various graphs and tables, while we just came and showed them a nice presentation. Actually, that’s why our team is called APLe. This is both a reference to the renowned company and the first letters of our names.”

The team members plan to continue working on their project in the future. Now they want to move from data analysis to real product development. Accenture has already invited them to do an internship at their company.