This July, students of ITMO’s Informational Technologies and Programming Faculty Nikita Losovetin and Nikita Savilov participated in Start-Up China, an internship program for entrepreneurs at the Neusoft University in Dalian, China. In collaboration with their international colleagues, they worked on developing products from scratch, attended workshops, and strengthened international cooperation. The students spoke to ITMO.NEWS about their experience of spending a month in China and participating in an international program for young entrepreneurs. 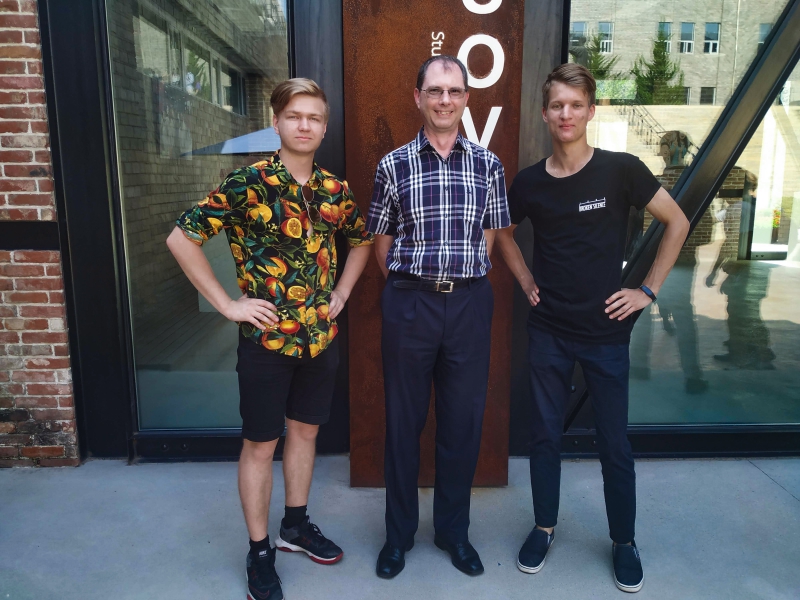 Start-Up China is a summer educational program aimed at students of business and IT fields. In the course of almost a month, its participants work in groups in order to develop a prototype of an innovative product and found a virtual company for implementing their solutions. They are helped by professional entrepreneurs, who tell them about such things as conducting market research, and developing business models as well as the specifics of negotiating with investors.

The program is conducted by Dalian’s Neusoft Institute of Information. Neosoft Corp. is a Chinese international company that focuses on software development and medical equipment, as well as services in the field of IT. The university that was founded with Neosoft’s help got into China’s top-5 private universities in 2018.

Thanks to the support of ITMO’s Technopark and the Asian Cooperation Center, two second year Bachelor’s students from the Informational Technologies and Programming Faculty, Nikita Losovetin and Nikita Savilov, got the opportunity to participate in Start-Up China. Before going on the program, both students worked on their individual projects. Nikita Savilov was developing ITMO.PRINT, a service for easy printing at the university campus, and Nikita Lisovetin was developing the YourLib app for helping users to categorize messages in messenger apps.

ITMO.NEWS talked to the students about their projects and their participation in the international summer program in China.

Tell us about the projects that helped you get on the program in China.

Nikita Savilov: I started working on a printing service at the beginning of this academic year. In three months, our company developed the software, bought a microcomputer and a printer, ordered the frame and adjusted everything that had to do with the technical aspect. Shortly before the New Year, we launched a station in the building at Lomonosova street. Right after that, our team faced a great many technical and organizational issues. The Start-Up China program that we were invited to offered knowledge and practical experience in launching and developing projects. It involves information on both the technical aspects as well as what has to do with management and commerce. And this is exactly what I lacked when I was launching ITMO.PRINT.

How was the training organized?

Nikita Savilov: We had classes in English from 9am to 5pm, with a lunch break, organized according to the following format: we got information from a lecturer, then worked in groups on tasks that were aimed to help us reinforce it. During the first days, we formed teams; mine included four students from Cleveland University and two students from Neusoft Institute of Information. We spent the first week brainstorming, came up with dozens of ideas for the project, but in the end, we chose a single one (which had nothing to do with printing). Then, we had two weeks to develop the technical aspects for the demo version. The last week was dedicated to the business aspect of the project, as well as the assessment of our results and development prospects. My specialization at ITMO deals with the technical aspect of software development only, and this summer program in China gave me the understanding of business processes and the practical experience of working in an international team.

Nikita Losovetin: The main idea of Start-Up China is to work in a team in order to create a new product and bring it to the state when you can approach investors. We first studied the typical clients and scenarios for using the app, and then started developing the demo. One of us designed the user interface in Adobe XD, another designed the database, the third completed the backend, and then we all started to code the app’s pages with the help of the Flutter framework that allows to create apps for both Android and iOS simultaneously. In just two weeks, we passed the development stage and were able to present our application. We spent the remaining time coming up with a business plan.

I also really liked the lectures we got on Chinese culture. For example, we tried writing Chinese characters with ink and brushes, did tai-chi dressed in colorful uniforms, and drank tea according to Chinese traditions.

What was your impression of this trip?

Nikita Losovetin: China is a breathtaking country, and Dailan is a grand city. It is built almost according to what the blogger Ilya Varlamov preaches: it’s very green, there are trees separating the roads from sidewalks, and benches everywhere. I say almost because there are lots of high-rises in Dalian. In the whole of Russia, we have some ten skyscrapers, but in China, there are many, with regular people living there.

How do you think the experience that you got at Start-Up China will help you in the future?

Nikita Savilov: As for my plans for ITMO.PRINT, I am willing to speak about results only. The project has potential, and we need to work on improving the system, more so because we have serious competitors. Apart from us, a similar project was launched at the Higher School of Economics by an acquaintance of mine whom I’ve known since my school years. By the way, we didn’t know about each other’s projects until I launched my system. He presented his work later in June when he was defending his thesis.

What did I get from participating in Start-Up China? Experience and knowledge. Expansion of my social network? Yes, that as well, moreso with people from different continents. An incredible experience of being in China? Absolutely.

Nikita Losovetin: At Start-Up China, we got invaluable experience in everything from communicating in English to living in a different country for a long period of time. For now, I consider seeing every stage of product development from a blank slate to be the trip’s most useful experience. By all means, I did understand how to create new products before participating in the program, but there, they also taught me to make the best of teamwork and prepare material aimed at potential investors.

The project that we’ve been working on in China looks very promising, so I continue working on it in collaboration with one of my peers. By the way, we are currently looking for mobile app and Web developers, a designer and a legal worker for our team. For particulars, you can contact me via my page in VK.