Recently, it has been for the third time that ITMO University participated in a week-long internship in social entrepreneurship conducted at the University of California, Los Angeles. The internship's goal was to collaborate on two joint entrepreneurial projects that will be launched simultaneously in both Russia and the USA. ITMO.NEWS learned about the internship's procedure and the projects in question. 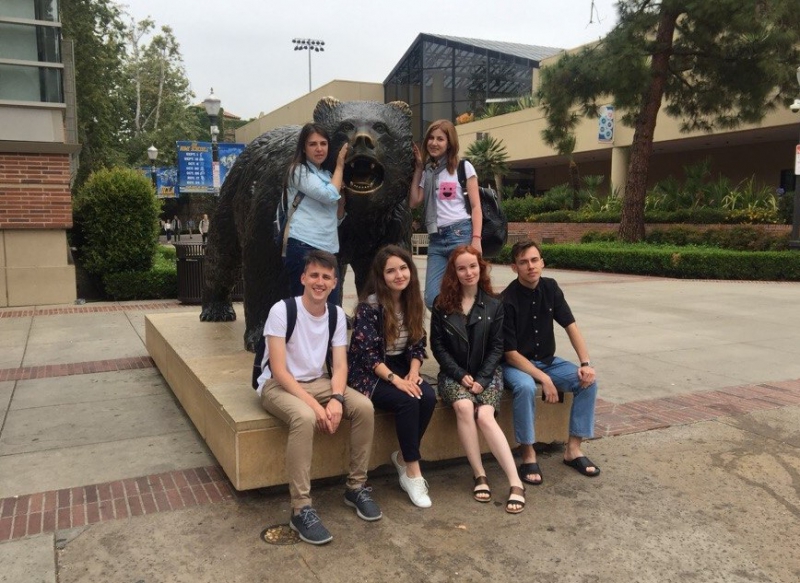 ITMO University and UCLA have been collaborating in the field of social entrepreneurship for three years already. In the course of this collaboration, the internship's content has undergone significant changes.

"It is not just about the nature of the internship, but also about the changes in students and the general situation in our countries that we can now talk about. This has been noted by the representatives of the American university, as well: while in the previous years Russian students focused more on charity, this year, they've started to pay more attention to the financial aspect of the project, i.e. its commercialization and the use of profits as an instrument for the social project's realization, which is characteristic to American entrepreneurship in the social field. Such changes make the program all the more interesting. For one, it now focuses on on not only the nature of social entrepreneurship, like in the first years, as Russian students already have the understanding of basics, but explains the practical aspects of implementing successful entrepreneurial projects. As part of the intensive course, American speakers share useful practical skills in budgeting and development of sales strategies - these modules now get more attention than before, when we were just explained about the phenomena on social entrepreneurship," comments Yuri Kuporosov, head of ITMO's Social Design and Entrepreneurship Center.

According to Mr. Kuporosov, the recent turn towards the financial aspect by the Russian social entrepreneurship community can be associated with the complexity of getting grant financing. Without much experience and support, young people find it hard to attract funds, despite the Social Design and Entrepreneurship Center actively helping with participating in contests and getting partnership from student communities and non-profit organizations. The pursuance of financial success can also be associated with understanding of the tradition-bound nature of current project activities. For one, a project's authors can not make amends within the course of a year since submitting of a project, though modern youth wants to quickly react to the rapidly changing conditions of the market.

"The best idea that has been said at the internship belonged to an invited speaker, who once worked as a broker on Wall Street and then renounced brokering and organized his own non-profit organization. It went as follows: in order to develop a very good project, one has to have a lot of experience in solving the problem they are focusing on. Good projects fall under two categories: there are projects by people who know how to attract investments and work with them, and projects where there are no such people. This idea reflects the current situation quite well: we have very few people who know how to attract money for launching a social entrepreneurship project in modern conditions. And this may well be the key difference between the situation in Russia and the USA: a project that seems socially responsible has better chances to attract money in the USA. In Russia, everything is embedded in the governmental system and foundations, which makes it harder to attract investments for entrepreneurial projects," explains Yuri Kuporosov.

In the course of the internship's educational project, ITMO University's delegation attended a series of lectures by representatives of American social entrepreneurship. UCLA professor Andrew Atkeson gave a lecture on the models of social entrepreneurship, and social entrepreneur Michael Muslin shared his experience in developing a financial model and assessing an enterprise's efficiency. Alice Hearl, member of the Social Entrepreneurship Academy, gave advice on developing a business plan, and Diana Evans, head of UCLA's startup accelerator, expanded on their projects launched since 2013 and invited the participants to this year's investment session of the Academy's ten best projects.

In the course of practical training, students from ITMO and UCLA started working on two social entrepreneurship projects. Two key elements for choosing a project's focus were the social aspect and commitment to the proposed ideas. At the same time while the Russian students work on implementing their projects in Russia, American students will be launching them at their university.

The Plastic Go project is dedicated to recycling HDPE plastic bottle caps into material for 3D printers which can be used in the production of phone cases and other items. The project's authors plan to produce phone cases for cell phones from processed materials. The project's mission is to increase the awareness of issues related to waste separation and to promote the usage of recyclables.

"On the current stage, our main goal is to get an expert evaluation. We need to speak with people who deal in recycling and understand the terms and resources that are necessary for setting production and commercialization. We get lots of support from ITMO University. We will put specially designed containers for collecting bottle caps at the university campus. We've also negotiated with OLYMP laboratory on helping with the issues of 3D printing and analysis of the quality of materials. Thanks to ITMO University, we'll have a platform for production and promotion of the project, and the first sales can be tested at ITMO.STORE corporate shop. In the future, we plan to develop a successful model for replicating the project at other universities," explains Angelina Ivanova, the project's participant.

The project's authors save a lot on logistics, the low costs of plastic being the key advantage. With the right technology and equipment, the costs for recycling a kilogram of plastic derived from bottle caps amounts to about 40 rubles per kilo; after recycling it into filament, its cost grows 10 times and can amount to 400 rubles, and the cost of items produced from this filament can be even higher. What is more, the practice of recycling plastic without the help of recycling plants but using domestic equipment has already been described by several foreign companies. There are still no counterparts for such production in Russia.

"There are only domestic experiments with the use of simple equipment. The process of recycling plastic does not necessarily imply using expensive equipment. The social aspect plays an important part in the project, being one of its key advantages. We plan to work in two directions: production of phone covers and the possibility of recycling these covers once again," comments Angelina.

"We plan to make use of the advantages of remote working and offer education in the field of IT and jobs to mobility impaired people. This approach will make it possible to compensate expenses on education with government assistance, get profits and pay salary from money earned from completing orders. Nowadays, many companies employ mobility impaired people, but we plan to pay more attention to the issue, offer flexible schedules and psychological support, which can become an advantage," comments Ilya Lyamkin.

He explains that common companies don't offer benefits to these categories of citizens, as most of them believe that impaired workers are less efficient. The project's authors plan to contact impaired people and offer them training in IT. They plan to use a single project for training, and then develop an educational path in accordance to their progress. In the early stages of training, one does not need professional skills, only basic computer skills. The next steps are searching for incentivized impaired people through dedicated organizations and establishing links with potential employers.