All throughout the past week at ITMO University, seven teams from Russia, the US and Switzerland were developing social projects to then present them to the judges. The students and lecturers forming part of the groups interacted with their colleagues, discussed the difference in social entrepreneurship approaches in their countries, and exchanged experiences in order to come up with the most comprehensive solution for their tasks. Read on to find out how it all happened and what the participants learned from each other. 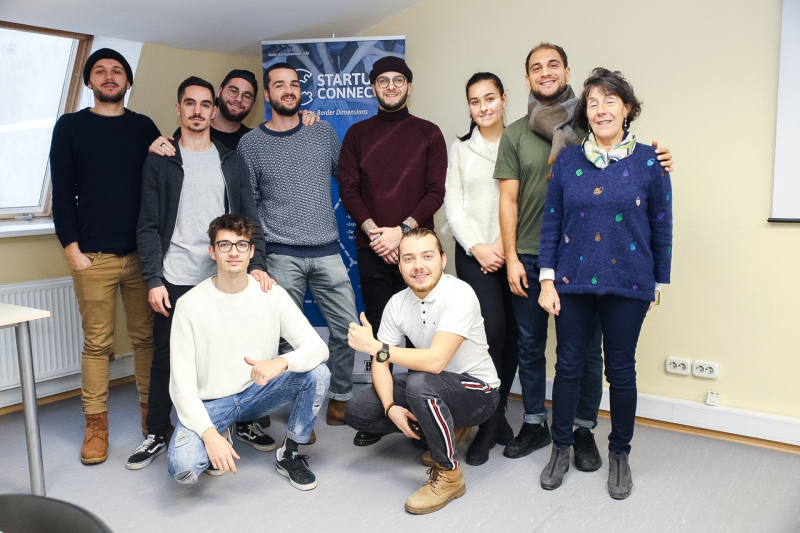 Participants of the International Week of Social Entrepreneurship

International Week of Social Entrepreneurship at ITMO University is a project based on the long-standing partnership between ITMO, the University of California, Los Angeles (UCLA) and the University of Applied Sciences and Arts of Western Switzerland (HES-SO). The initiative is a logical continuation of the International Festival of Social Entrepreneurship (IFSE), but with a significantly expanded educational component.

In the course of a week, the teams were attending lectures and workshops, doing mini-presentations on social entrepreneurship in their countries, and visiting St. Petersburg’s socially-oriented businesses. Among these was the museum Touch the World, which gives sighted people the opportunity to experience the world as it is felt by people with visual impairments and understand how they live, perceive, and orient themselves. Another was the project Legko-Legko, which helps inclusive ateliers sell their products. Last but not least, the participants visited the inclusive cafe Ogurtsy (Cucumbers), which hires people with health limitations.

“I think that social entrepreneurship is an important part of public life regardless of the country. I’m happy to be part of our team and help the activists who, for a couple of years already, have been working on a program for helping war veterans. I think that the International Week of Social Entrepreneurship is a great opportunity for each country’s students to discover different ways of doing this activity, what are the levers and variations in this sphere. Social entrepreneurship is detached from national ideas, it teaches you to think not only about yourself, and this dialog we can be not only Russian, American or Swiss, but first and foremost, people – members of one big human family,” shares Archie Lee Holton, a lecturer at UCLA.

In all this time that the teams’ members were getting to know each other, discussing their ideas and the operating principles of the social sector in their countries, it became clear just how much these principles are different. This could be seen even on the example of the teams’ composition: the Russian one consisted of the student members of ITMO’s Volunteer Center, the US one – of entrepreneurs and members of a local accelerator, while the Swiss one of professional social workers.

“This was a really interesting experience, as our countries have an entirely different approach to social entrepreneurship. In my opinion, for Americans, this is first and foremost an opportunity to earn money and only then a socially oriented activity. In our case, it’s exactly the opposite: for us, the idea component – a social problem – comes first, and whether we can earn something off it or not doesn’t matter that much. Russia is somewhere in the middle: both the help part and the financial part are equally important. In any case, it’s always useful to explore diverse approaches because we can learn many things from each other. For example, the American team can shed light on how to raise revenues from social entrepreneurship, while the representatives of ITMO University can explain the ins and outs of coordinating the work of a volunteer center,” commented Emmanuel Philippe Claude Fridez, a lecturer at the University of Applied Sciences and Arts of Western Switzerland.

Emmanuel Philippe Claude Fridez’s colleague Benoit Renevey highlighted that their team is especially interested in Russia’s volunteering movement. That is because Swiss social entrepreneurship has very little volunteers – for the most part, it’s staffed by qualified social workers.

The difference in approaches was best reflected in the problems each country’s team focused on.

“American projects tend to aim at making profits. This is what they go off of: that an enterprise should make a profit. But here it is important to distinguish between the notions of social entrepreneurship and corporate social responsibility because in our context, their ideas probably fall into the second category. If we dig deeper, in the case of corporate social responsibility a company’s primary activity may not pertain to the social sphere, but it implements specific socially oriented projects, while social entrepreneurship is based on an algorithm of making money on alleviating social problems. Talking about the Swiss perspective, it’s important to understand that they are the least concerned with the financial aspect because the state provides them with full financial support. So for them, profit-making is more of an additional option than a goal. In the Russian context, this approach can be summarized as the third-sector work, that of nonprofit organizations. As for our projects, it can be said that like the Swiss participants, for the most part, we’re driven by the goal of introducing positive changes into the social sphere, but because it’s more difficult to obtain state support in Russia we have to think about the money, too,” explained Yuri Kuporosov, a manager at ITMO University’s Student Initiatives Support Department.

The idea of the UCLA students focused on social rehabilitation of the US war veterans.

“Many veterans don’t have their own housing, and because they also suffer from a range of mental health illnesses such as post-traumatic stress disorder, they don’t have a lot of chances to return to the normal life on their own. We want to create a center where veterans would have access to a roof over their heads, support, and professional help, namely of the medical and psychological kind. Thus, the people who are alienated from social life could return to this environment and start rebuilding their lives,” explained Matthew Gonzalez, a student of the University of California Los Angeles.

Representing Switzerland at the International Week of Social Entrepreneurship were three teams, two of which worked in collaboration to create a joint final project.

The first HES-SO team’s idea was to create a center for the interaction of two largely disconnected generations: teenagers and the elderly.

“In our experience, pensioners and teenagers practically don’t communicate with each other, partly because these are two different communities with their own values and mindsets. Teenagers are an information generation which is never without their gadgets, knows its way around social media, but don’t have a good understanding of the laws of the regular material world. We think that through hosting joint events for the members of these two groups, teenagers can learn such basic things as cooking, developing the right attitude to work, they can also ask a more experienced older person for some advice. For the seniors, communication is an opportunity to, first of all, share their knowledge, and secondly to gain new knowledge about the modern world,” explained the team’s idea Ruben Alexandre Gomes Dias, a student at the University of Applied Sciences and Arts of Western Switzerland.

The second group, consisting of two HES-SO teams, proposed the creation of a volunteer center akin to one operating at ITMO University. They envisage it as a space where students can be taught the nuts and bolts of such work, choosing the field that appeals to them most, from helping the severely ill to providing assistance to animal shelters and protecting the environment. Their first step will be a large-scale ecological event featuring a fair and creative projects, including those by people with disabilities. There, students will be able to learn about the volunteering center and join its ranks.

ITMO University was represented by three teams with the projects “Festivities to Kids”, “#VSeti”, and “Buddy System”.

#VSeti (In the Network) is a project on teaching elderly people to use smartphones and mobile apps. Its implementation began in the spring of 2019 together with the Silver Age nonprofit on a gratuitous basis. After that, the authors of the idea started getting requests from libraries and commercial organizations to hold similar courses for them.

The goal of the Festivities to Kids project authors is to gift happiness and joy to children who are undergoing treatment in hospitals. This is done through concerts, creative workshops and performances.

The Buddy System project is implemented within ITMO itself. Its main aim is to facilitate the interaction between international and Russian students. As part of the program, international students arriving to do an academic exchange at the university are allocated a Russian student tutor (buddy).