Having attended dozens of conferences, developer and designer Ilya Farafonov noticed a common problem: the exchange of contacts after communicating with someone at an event takes too much time. This gave him an idea to develop an app that would help participants of conferences, forums, hackathons and other similar events exchange their contact information quickly and easily. Today, the startup is a participant of ITMO University’s pre-accelerator program, and recently the team has managed to win in the “Best Pitch” nomination at Techstars Startup Week. ITMO.NEWS spoke to Ilya to find out what makes the app different from social media and messengers and how it can tempt even introverts to get involved in the communication. 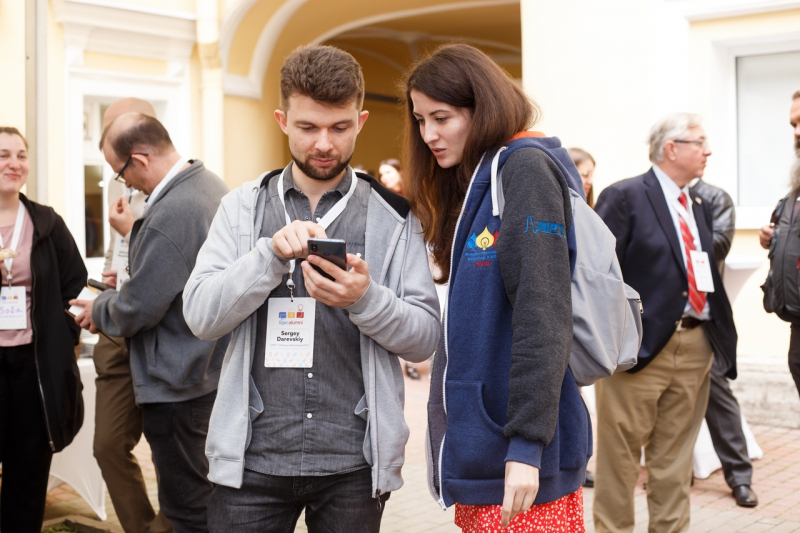 Improving networking at events: this is how Ilya Farafonov describes the main aim of the project. All too often, field-specific conferences, which among others have to serve as platforms for communication-building, fail to perform this function: participants just listen to presentations and leave, too shy to talk to the speakers or other attendees. The Face to Face app is an alternative to traditional business cards, representing a fully-fledged notebook that offers comprehensive information about your new acquaintance, says the developer.

“At the app’s main interface, you have your QR code, so the whole exchange can be done in just one click. A user can include any of their contacts – their social media account, their phone number, or their email – and you can leave a note about them to make sure you remember who they are,” comments the developer.

Ilya notes that firstly, your new acquaintance may not use the messenger you find the most convenient; secondly, having met a lot of people at an event, you might just forget what kind of arrangement you made with whom, or lose a person in your contacts.

“Of course, there are social media, but they only function as contacts in themselves. What’s more, I’ve encountered situations where after befriending a person on VK, I had to search for them among several hundreds of other friends, looking through a quite large amount of people to find the right one. This is inconvenient and also takes time,” says Ilya Farafonov.

In Face to Face, all users are automatically classified by tags depending on their line of work: iOS developer, designer, investor and others. Each contact is tied to a specific event, which will allow you to remember under which circumstances and where exactly did you meet that person. Furthermore, you can straightaway register the arrangements you’ve made, up until the date and time of your next meeting. Last but not least, the key advantage of the app is that all this information is gathered in one place, always staying at hand and not being dispersed throughout different apps, notes the author of the idea.

Competitors and their shortcomings

“They choose a general market instead of a specific audience. In other words, they’re saying, ‘We have the functionality to replace business cards.’ But this doesn’t work: if you want to attract all, you’ll attract no-one. And these products’ performance attests to this: one of them only has had about 2,000 downloads since 2016, another didn’t even manage to reach the 1,000 downloads mark, and this is nothing in terms of mobile apps,” explains Ilya.

Now, the app is a participant of ITMO’s pre-accelerator program. Here, the team has its own mentor with whom the developers consult on a weekly basis both face-to-face and online. In addition, they can attend expert sessions and lectures held by the pre-accelerator. Finally, all teams take an online course that provides the essentials of identifying a project’s target audience, marketing, promotion, and business plan development.

“Participation in the pre-accelerator gives you a colossal amount of experience, both theoretical and practical. The pre-accelerator brings together many people communicating with which helps you look at your project from different angles. Initially, when we were just starting to develop the project’s core idea, it had a slightly different orientation, but communication with experts, invited speakers and other startuppers led the project to what it is now,” shares Ilya.

Techstars Startup Weekend: how to present your project to an international jury and win

The pre-accelerator program gave the startup an opportunity to take part in Techstars Startup Weekend, which is held throughout the world. The event brings together the authors of projects at different stages of development and gives them the chance to, over the course of a couple of days, develop their project in teams and find partners.

The event lasted for three days and united over 70 people. On the first day, 30 participants had to present their idea in as little as 60 seconds, while others voted for the best project. Based on the results, the ten most promising ideas were chosen, after which others joined these teams.

In two days, the ten teams that were formed had to carry out customer development and also to work on the idea in constant interaction with experts and other participants. On the final day of the event, they presented the results of their work to the jury made up of international experts. Presentations had to be no longer than four minutes each. In the end, the Face to Face project was named the winner of the “Best Pitch” nomination.

“Techstars provided me with excellent experience. The event gathered startups from different fields and with different levels of completeness, there were even entrepreneurs that are already expanding their business and testing new ideas. Apart from that, the event was attended by experts from different fields, experienced business people, investors, representatives of accelerators. I managed to talk to almost every one of them. Importantly, the communication was held on the same level, no-one looked down on you. As was then noted by many, it was this format that made the event a success,” shares Ilya.

“As of now, we are considering two potential audiences to choose the most promising one for making our first step. But I think that participants of all kinds of events would equally find our app handy, so our plans won’t stop at that!” continues the developer.

The team already has a prototype of their product at the ready. The development stage will last two more months, after which the app will be presented for iOS and Android. The startup already has arrangements with three companies interested in testing the app.

Ilya Farafonov adds that the project’s team continues to expand:

“Our team is growing with the startup and if you want to become part of it and know how you can help, make sure to get in touch.”

You can contact Ilya Farafonov via VK and tg at @pharafonov.