The Neuroscanner company became a winner of the All-Russian Festival of University-level Technological Projects by the Higher School of Economics. ITMO.NEWS talked to its founder Rodion Yuriev, a PhD student at ITMO's Faculty of Software Engineering and Computer Systems. 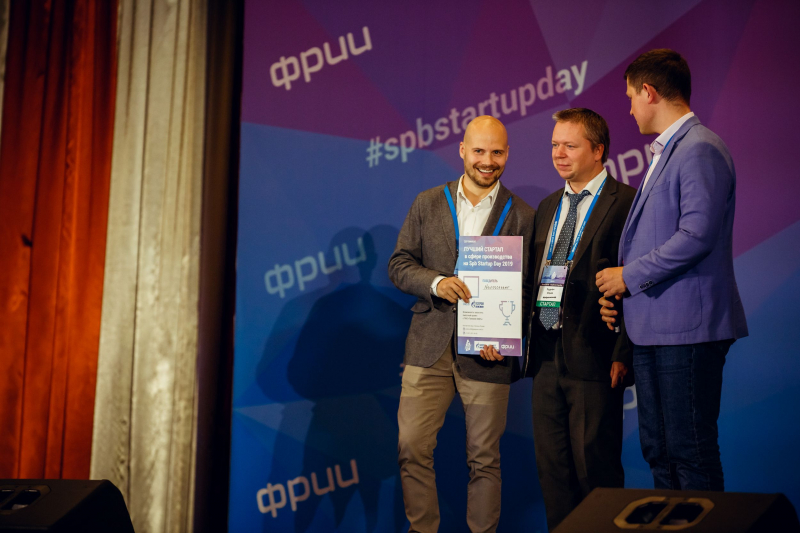 Overall, 360 teams participated in the contest in eight categories: “AI, biometry and computer vision”, “Quantum technologies”, “Biotechnologies and medical technologies”, “Internet of things, cybersecurity, smart city and smart home”, as well as several others. The main requirement was to be associated with some Russian university (a team had to include a student or a lecturer), to have a working prototype, and for the technology to be innovative. The three winners got cash prizes of 100 thousand rubles and an opportunity to go to *Ship Startup Festival in Kotka, Finland.

ITMO.NEWS talked to Neuroscanner’s founder Rodion Yuriev about the field they work in, the company’s rapid growth, the search for partners, and their winning streak at various contests.

"For now, our main focus is using AI to decipher flaw patterns. It can be can be useful in production, for example for assessing the welding of metal items or the condition of railroad tracks. The latter is our current priority: we’ve recently won a contest by Russian Railroads and Samara Innovation Foundation for a pilot introduction of our technology at a section of the Kuybyshev Railway. We plan to finish this project by December. And before that, in March 2020, we completed an acceleration program at the Kirov Plant and got the opportunity to check our system for automated analysis of vibration-based diagnostics data in the real production conditions.

- Can you tell us about these systems in more detail?

By using neural networks, we identify the signal that emerges from metal during regular tapping or ultrasound analysis, which makes it possible to identify cavities. That's how flaw detection works in many fields including checking railroad rails for cracks, which is essential for safety concerns. As of now, it implies using lots of human resources: first, a special train equipped with a flaw detector goes along a section of tracks, and then follows a team of human workers who double check the flaws it identifies, so the expenses are enormous. We calculated that the introduction of our system will help Russian Railways save up to 0.7 billion rubles annually.

- But these are not your first projects, are they?

Yes, they aren't, we went a long way trying ourselves in various fields. One of our first projects was a system for identifying camera defects in intercoms. Now, our system is used in over 20,000 intercoms in the Northwestern Federal District.

Frankly speaking, it’s quite a simple task – you just need to detect that a camera has been covered with gum, dirt, or stopped working. There was a time when it was done by a team of people who spent days looking at screens. Cyfral, a major intercom company, commissioned  a system that would do it on its own, otherwise they would’ve needed to open a whole center and hire lots of staff. In the end, they gave us a huge database that they’ve accumulated which we used to teach a neural network.

Before that, we had other projects: an app for identifying plant diseases that we made as a part of a HSE hackathon, and a system for assessing the integrity of pills developed for St. Petersburg Pharmaceutical Factory.

- You’ve founded your startup back when you were a Master’s student. Did your decision to continue your education have anything to do with the desire to create your own company?

At first, I just got interested in quantum computations: they offer a whole new approach to problems, you could say they expand your consciousness. Eventually, I got my flaw detection idea.

For me, it was the Island 10-21 educational program the took place in Vladivostok in 2018 that led me to my Master's studies. There, I got to know ITMO professor Alexey Dukhanov, who invited me to join a Master’s program aimed at quantum technologies and artificial intelligence. So, I applied for a program with ITMO and for a patent for my flaw detection technology with the Federal Service for Intellectual Property almost at the same time. You could say it was an perfect match.

- Do you have other patents?

We have several other patents, but also a multitude of those we couldn’t get. For example, we once decided to rey ourselves at geological surveys but couldn’t get a patent for a neural technology in this field – one American company already had it. As a result, we consulted one major governmental company in forest conservation but we quickly realized that there are no prospects in this field, as we’ll end up facing legal restrictions.

Another project that we couldn’t patent is the Neurotester for noninvasive human studies. It happened so that Samsung applied for a similar patent just a month before I did, and the technology has already been implemented to a certain extent in some of the new Galaxy smartphones.

What really bites is that I’ve had this idea for a long time but hesitated to patent it. I listened to people who said something like: “you don’t need that, no one needs patents, it’s no use to protect authors' rights”. Now I understand that you shouldn’t listen to anyone but believe in yourself. Ideas float around, and it’s no wonder that different people get the same ideas at the same time. There’s nothing to think about, you should just write an application and apply with the Federal Service for Intellectual Property: they are very mindful of inventors. Without a patent, you can’t do anything, especially if it’s the international market that we’re talking about.

- Nevertheless, your startup seems to thrive, despite these setbacks.

This year, our company is a startup with a turnover of 10 million rubles. A year ago, we had nothing save for an idea. Now, many major Russian organizations, including Russian Railways and Gazprom Neft are interested in working with us. We lack the hands to process the incoming flow of requests. And we don’t have any investors: we do everything on our own, participate in numerous contests, and talk about ourselves. We’ve completed several acceleration programs, won a number of startup contests, became residents at Skolkovo – thanks to that, we participated in last year’s Slush in Finland, expos in Lisbon and China, and in many other events.

- So you develop at your own expense?

We mostly use our own savings, and we also have several industrial partners who are interested in our inventions, like the Kirov Plant where we now introduce it. In the very beginning, we applied for the Start-1 program with the Foundation for Assistance to Small Innovative Enterprises.

We didn’t get it straight away – first, we got three or four refusals, but in September 2019, they finally gave us a grant for the development of an idea and creation of a prototype. And in September 2020, we got a grant from the Kuybyshev Railway.

Last year, we became residents at Skolkovo, which made our document flow and taxation easier. That saves us a good amount on accountants, plus the tax breaks there are very good.

- How many people are on your team?

I have two partners. Pavel Peregudov is a film producer from St. Petersburg. That might seem a long way from AI, but in reality, he’s very keen with technology, he can assemble any equipment by himself, and is one of the first people to come up with LED advertising. I got acquainted with him when I was interested in dramatic art and wrote screenplays. Alexey Petrovichev is the head of his own construction company. He lives in Moscow, so he regularly represents the company at various foundations, events and expos.

We all have the experience of launching companies, but they weren't big, so we lack the experience of getting to federal and international-level markets. We still don’t know how to enter the international market, as it has requirements that we aren’t ready for yet. But we grow and we learn. For example, we just recently took part in Archipelago 20.35, an event by University 20.35 dedicated to AI and data analysis.

Among our staff are also students whom we met at ITMO and Peter the Great St. Petersburg Polytechnic University (SPbPU) when we participated in TechNet Project. On the whole, we think we need about 40 people, but it all gets down to funding.