Daria Fedorova, a Bachelor’s student at ITMO’s Faculty of Technological Management and Innovations, was named one of the winners of the NEXT5 contest organized by Pyaterochka retail company. Together with her friend, Daria suggested a modification to the company’s corporate application that would allow potential employees to experience a sneak preview of their job in a virtual simulator, while current retail and storage facility workers would accumulate points to be counted towards their promotion or a salary raise. We reached out to Daria to ask her why she decided to apply, how long it took her to develop the concept, and why she thinks it useful to take part in such events. 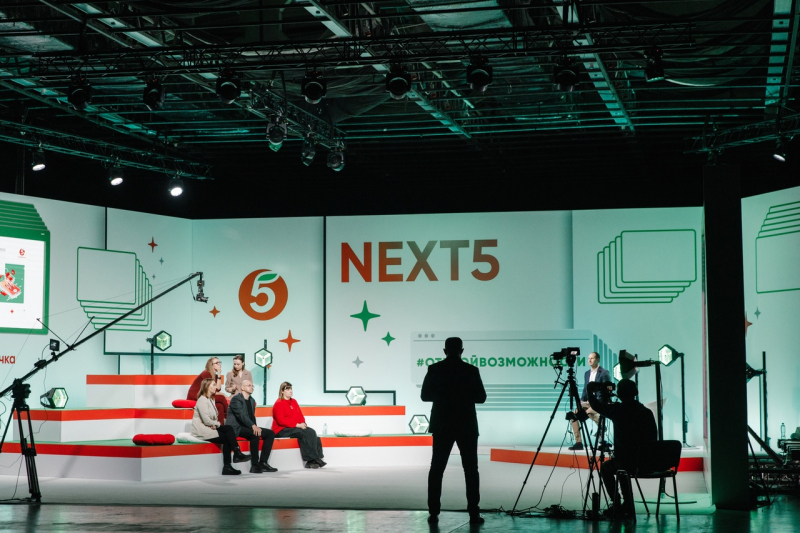 NEXT5 contest. Photo courtesy of the organizers

Can you tell us about the NEXT5 contest?

The contest was organized by Pyaterochka to collect ideas on improving their HR processes and the brand, as well as attracting your people to the company.

How did you learn about the contest and why did you decide to take part in it?

I came across the contest announcement on VK by chance. My friend Giti, who studies at another university, and I keep track of case tournaments but the topics rarely coincide with our interests – here, we were very into the task itself. I am generally interested in everything HR, so I considered this contest not only engaging but also potentially beneficial for my future.

What did you have to do to participate?

There were six thematic sections in the contest and you could choose any one of them to implement your idea. At first, you only had to describe it in a special field of the application or attach a file if there was not enough space.

Giti and I sat down for a brainstorm about four hours before the applications closed. The aim of the contest was to attract young people to the company. We asked ourselves what is it that employees need from their employers? The main things are respect, a decent salary, growth prospects, and an overall understanding that your work is not in vain and your employer truly cares about you.

That’s how our idea was conceived and then it grew like a snowball, one idea brought the other, and our whole application was complete.

And what kind of idea was it?

We suggested a modification to the corporate app that the company already has. Actually, at first, we didn’t know there was one, so after completing one third of our work we had to learn all we could about the app. It took us a lot of time to find a way to update it so that employees and candidates could really benefit from it. The core of our project is in polishing the current app for the employees and adding similar functions for those only thinking about getting a job, so that the HR brand is more attractive, especially for young people.

What did you decide to add?

We thought about vertical and horizontal mobility of employees and created a new system of motivation – special points that employees can earn for various tasks. These points can count towards a salary raise, or help take part in company contests or vacancy contests.

The thing is that you can see what growth opportunities are open to you in the company, while you earn your points with your efficiency measures based on your initiatives and not standard KPI. That way, we tried to show that your career can be seen like a game, it’s fun and offers a lot of prospects.

You said that you’ve added functions not only for employees, but for those applying for a job at Pyaterochka. What kind of functions are those?

We suggested adding simulators for different positions in the company, so that people could virtually get experience at these jobs. For that, we proposed creating two main VR simulators: one for employees at stores (cashiers, etc.) and another for those who work at storage facilities (general orientation in the storage structure, loader operation). It’s something like a simplified version of the Supermarket Mania game. We also thought about mini simulators for market and financing experts, lawyers, and HR specialists. These are very simple: you will see your desktop and go through the main tasks at a particular position (each simulation will last no more than ten minutes).

We also proposed adding a video that describes a typical day in the life of an employee. There, the future manager could explain in a friendly way who they are looking for and why, what the workload is going to be, and what the main tasks are. It is actually only a small fraction of our idea, but if anyone gets interested, I can send them the link to a compendium of the finalists’ projects.

First, we applied with our idea, where we gave a very detailed description of the concept. Then there was a selection stage, where the jury chose the ideas they thought the most promising. After that, there were special training sessions for those who passed the first selection. There, we were taught the basics of working with projects, public speaking, and creative thinking.

We also had Zoom meetings with the staff of the company – managers, experts in logistics, and HR specialists. We could ask them any question in an open discussion, and then we completed our projects based on that.

How much time did it take to polish the concept?

About a month of intensive work.

Then there was a semifinal in the form of debates with only three teams remaining in each of the six tracks. Only two teams in each of them proceeded to the final.

Who were your competitors in the final?

There was an interesting project with meal plans for employees, which included a whole system with a focus on healthy food. This team also suggested various corporate sports contests, gym memberships, and so on. The idea itself was great, but unfortunately the team didn’t work out all the details. We would actually really like to add these functions to our app, taking into account all the mishaps of our competitors.

The biggest challenge for me in the final was battling my nervousness connected to technical issues. We debated live and I didn’t have the quickest laptop at the time, so I got really anxious because my presentation wasn’t loading.

Did you present your concept or the complete app at the final?

We don’t have the app yet, so it was only a concept as well as a technical task.

What did the winners get and what will happen to your concept next?

We were awarded 60,000 rubles. Potentially, we will be involved in the actual implementation on our idea – we would love that.

All in all, case tournaments provide for a very interesting experience, whether you win or not. You meet the people who can later become your collaborators on exciting projects. And you generally get to see how small our world is.
At the contest, we met a girl from Kaluga, who only a couple of days before had organized an event at ITMO with our Career Center.

The NEXT5 contest was organized by Pyaterochka’s chain of stores. Teams from 19 Russian cities took part in the contest, suggesting a total of 156 ideas with only 12 best being selected to take part in the final.

“We think it was a successful experiment – we didn’t expect this many ideas and applications, as well as this thorough an approach to the concepts,” says Svetlana Teplykh, head of youth engagement of the HR brand development management department at Pyaterochka. “Naturally, we have thought about some of the suggested ideas, and students’ insights were a great contribution to our projects.”

As a result, winners were announced at the online final that was viewed by 500,000 people, according to the company. Winning students came from St. Petersburg, Moscow, Krasnodar, Yekaterinburg, and Kaluga.