School students from ITMO’s Infochemistry Scientific Center won first prize in an international VR hackathon with their simulation of a cell laboratory. 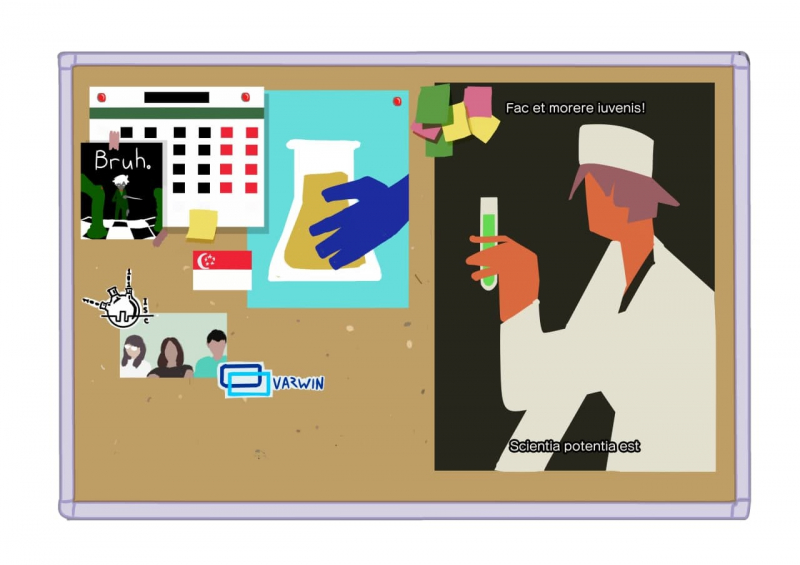 An illustration from the presentation of the VR Cell Lab developed by Vasilisa Kretova, Marina Malyshkina, and Kirill Prichisly. Photo courtesy of the authors of the project

The team consisted of Vasilisa Kretova, an 11th-grader from School No. 564, and Marina Malyshkina and Kirill Prichisly, 11th-graders from Presidential Physics and Mathematics Lyceum No. 239. All three are students at ITMO’s Infochemistry Scientific Center.

The students developed a VR laboratory of cell biology with all the necessary equipment and procedures for working with cell cultures. The project’s authors believe that it will prove beneficial in teaching school students and promoting science among both children and adults.

The event is organized by Varwin, a company that develops software used to create and edit virtual content, VR simulators, presentations, and training. With the help of its tools, users can create online platforms for teaching, training, or practicing specialized skills in any environment and manage VR content.

The hackathon brought together eight teams: five teams from Singapore and three – from Russia. As explained by Georgij Petrov, the head of business development at Varwin, the task was to pick one of the 17 Sustainable Development Goals (eradication of poverty and hunger, good health and well-being, climate action, responsible consumption and production, etc.) and develop a related VR project within a week.

“After we gave students access to the software and explained its key features, the teams started to work independently. They studied our Unity SDK, created models in Blender, and exported them into our software. While the teams from Singapore made use of existing models, videos, and images, students from Russia went well beyond our content and presented some very price-worthy projects. As a result, the VR Cell Lab was highly regarded by the experts,” says Georgij Petrov.

A team from Singapore that developed a water purification system for one of the nation’s factories came in second. The third place went to a project that studied how climate change affects the well-being of Singaporeans.

The hackathon’s winners received a year-long license to Varwin’s products. The platform allows users, even those with no programming skills, to create, edit, and scale VR projects.

ITMO.NEWS talked to the team members Vasilisa Kretova and Marina Malyshkina to learn more about the hackathon and its results.

Vasilisa Kretova, an 11th-grader from School No. 564

I’ve been studying at ITMO’s Infochemistry Scientific Center for a year now, and this was my first-ever hackathon.

We created a fully equipped simulator of a cell laboratory and established procedures for working with cell cultures. Our project is user-friendly. We introduced a voiceover into the project to help users stay focused and avoid distractions. The virtual laboratory may be used to teach school students and promote scientific knowledge among adults. Projects such as ours make education more inclusive and accessible.

The hackathon was challenging! I enjoyed working in a team. We worked together smoothly and always had each other’s back. Varwin was a new platform for us. At first, it was difficult. The platform felt short on various features that were critical for our project. For that reason, we had to be creative with workarounds. Yet despite all the difficulties, I still think that it is a highly promising tool. We spent a lot of time and effort creating plenty of assets – and we’re happy with the results.

Marina Malyshkina, an 11th grader from Presidential Physics and Mathematics Lyceum No. 239

I did an internship at the center in late October 2020 and decided to stay on. During this time, I won first place at the IChem Prize Competition with my presentation on the fabrication of biocompatable biomimetic materials.

I went for the hackathon because I had always wanted to do 3D modeling. I never had time for it and the hackathon was my best choice. We had one week to prepare our project for the presentation. It took around 20 hours to get used to the interface of Varwin as it seemed rather inconvenient. In the meantime, I picked up Blender and Paint 3D, too.

After I handled these programs for long enough, I wasn’t so exhausted and irritated as I was at the beginning. I felt excited about other projects because I now knew I can model anything. As a whole, I’m glad that I participated in the hackathon and I enjoyed talking to students from another country in different settings.