On June 27, Youth Day, the names of St. Petersburg’s best graduates of 2017 were announced in a ceremony held at the atrium of the Commandant’s Office of Peter and Paul Fortress. Governor Georgiy Poltavchenko, Vladimir Vasilyev, Chairman of the Rectors’ Union of St. Petersburg and ITMO's Rector, and other representatives of the city's universities gathered to congratulate the young experts. Among the 70 best graduates was Polina Litvinenko, who has recently completed a Master's degree program at ITMO's School of Lighting Design. 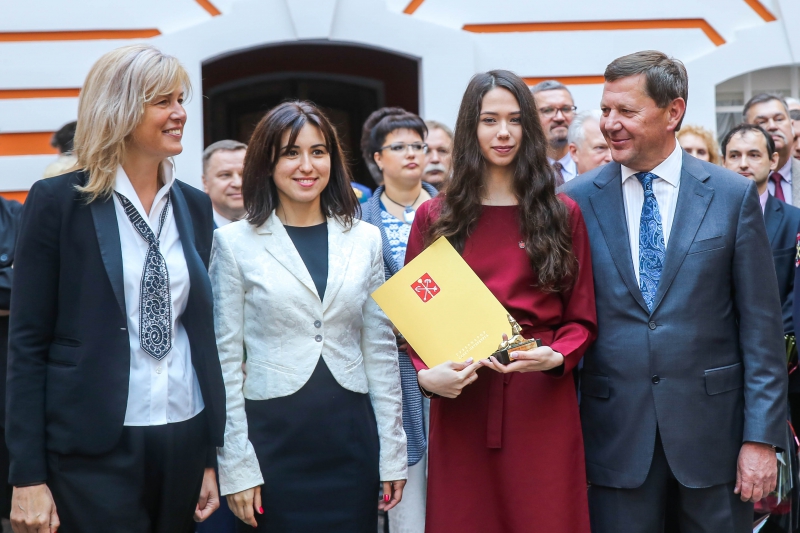 For 15 years already, the city's administration awards the best graduates of St. Petersburg universities. The annual event starts with the traditional midday cannon salute from the Naryshkin Bastion. In 2017, more than 70,000 students got their diplomas, yet only 70 of them were invited to the atrium of the Commandant’s Office of Peter and Paul Fortress to receive the Bronze Sphinx award.

"You've proved that you are people who can set for yourself ambitious goals and successfully achieve them. Both our city and our country in general need such specialists. I hope that many of you will stay in our city to complete the projects we're now introducing. There's a great many of them: during the last St. Petersburg International Economic Forum only, we've signed an agreement for an amount of more than 250 billion rubles which will go towards realizing different projects. Naturally, the brand of St. Petersburg's Higher School is most respected, so you will easily find employment in any of Russia's regions, but remember: St. Petersburg needs you. I hope that you will apply your talents here, in the world's most beautiful city, which is always ready to grant you what you wish," said Georgiy Poltavchenko, St. Petersburg's governor. The best graduates received certificates of gratitude signed by the governor, as well as the symbol of the Rectors’ Union of St. Petersburg - the Bronze Sphinx.

"Among the 70,000 St. Petersburg's graduates we've chosen the best of the best. Surely, the universities are different, each has its programs and mission, its field of research, yet there is something that unites us - we're all from St. Petersburg. All of us are St. Petersburg's students, graduates, lecturers, and it's most symbolic that we congratulate our best graduates in the Peter and Paul Fortress, as they are the carriers of St. Petersburg's unique "gene" which places the city at the pinnacle of innovative development. We are absolutely sure that the goals you'll set for yourself, you'll definitely accomplish," said Vladimir Vasilyev. Polina Litvinenko, who has recently completed a Master's program at ITMO University's Higher School of Lighting Design, was named among the best graduates. At ITMO University, the candidate for the award is selected by the Department of Youth Policy -  the candidate has to not just have good grades, but also actively take part in the university's activities. For several times, Polina Litvinenko was chosen head of the student self-government associations.

"Each year, every university chooses only one best graduate, and I am honored to be chosen amongst ITMO's 2,000 graduates. It is only now that I begin to understand what important milestone I’ve passed and how much the university has given me - it was not just high-quality education, but also great knowledge of life. From 2014 to 2016, I was chairman of ITMO's Student Council, and in 2016 I entered the Student Council of St. Petersburg. In future, I plan to continue working at the university’s Department of Youth Policy," shares Polina Litvinenko. We'd like remind our readers that on July 1, any ITMO graduate can participate in the university's graduation event, as well as their friends and parents, which will take place at the Peter and Paul fortress. You can register for the event here.