The 16th annual Awards Ceremony has been recently held in the Peter and Paul Fortress to honor the best graduates of St. Petersburg universities. The Vice-Governor of St.Petersburg Vladimir  Kirillov,  and the representatives of the city's universities gathered to congratulate the young experts. ITMO University was represented by Gennady Korotkevich, a Master’s student at the Computer Technology Department, a multiple  winner  of various programming competitions. 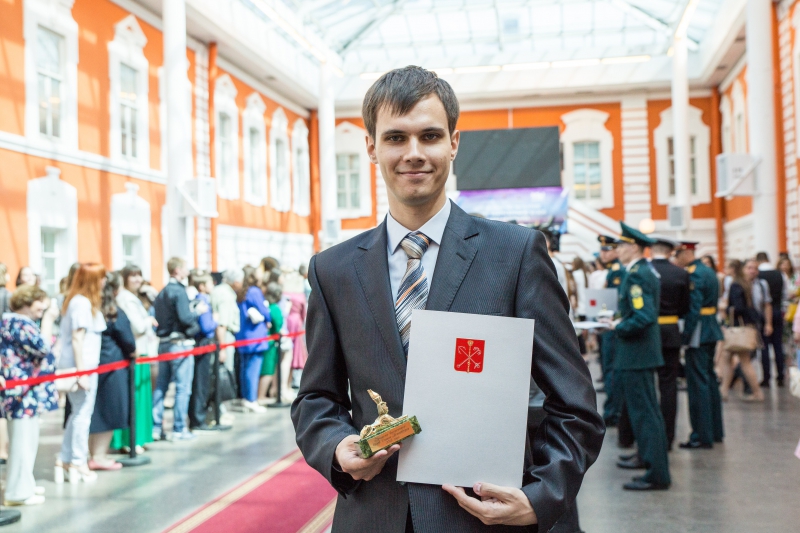 For 16 years already, the city's administration has been awarding the best graduates of St. Petersburg universities. The annual event starts with the traditional midday cannon salute from the Naryshkin Bastion. This year, 60 students were invited to the atrium of the Commandant’s Office of the Peter and Paul Fortress to receive the Bronze Sphinx award.

“Today we honor the most talented students of the city. With your knowledge and skills, you have proved that you are the best. Vladimir Putin, the President of the Russian Federation, has recently mentioned the importance of education and technologies for the country. Yesterday, at the meeting of the Government of St. Petersburg, we discussed the socio-economic development strategy until the year 2035. According to this strategy, we have to ensure an industrial production growth of at least 2-3 %. Only then we will be able to tackle all the tasks announced by the President. It’s you who will work on these tasks. You are our hope”, said Vladimir Kirillov, Vice-Governor of St.Petersburg.

The best graduates received certificates of gratitude signed by the Governor of St. Petersburg, as well as the symbol St. Petersburg's Rectors' Union, the Bronze Sphinx, which symbolizes wisdom and victory. The majority of the graduates are winners of all-Russian and international competitions.

“Dear colleagues, you are the people who will determine the future development of our country, and we are happy to congratulate you on your achievements”, said Stanislav Eremeev, the first deputy chairman of the Council of Rectors of St. Petersburg Universities.

Each year, every university chooses only one best graduate, based on their grades and other factors, such as participation in the university's activities and awards. Gennady Korotkevich, a Master’s student at the Computer Technology Department, represented ITMO University. He has won dozens of international championships and competitions in sports programming, organized by such IT-companies as Google, Facebook, IBM, Yandex, VKontakte and others. He is also a two-time champion of ACM ICPC.

“During the years that I spent at ITMO University’s Computer Technology Department, I achieved quite a lot. I have decided to continue my education at the University as a PhD student”, comments Gennady Korotkevich.