On October 6, ITMO University hosted SPb School CTF-2018, the second regional school competition in the field of information security organized by ITMO together with the Association of Chief Information Security Officers (ACISO). It may not surprise you that ITMO University school team ITMO.KIDS took first prize, but what is remarkable is that the winning squad only consisted of two people: Artem Zaglubotsky, an 11th-grader from the School №261, and Yuri Grishin, a seventh-grader from the School №486. The two powerhouses competed against teams that included six people on average. 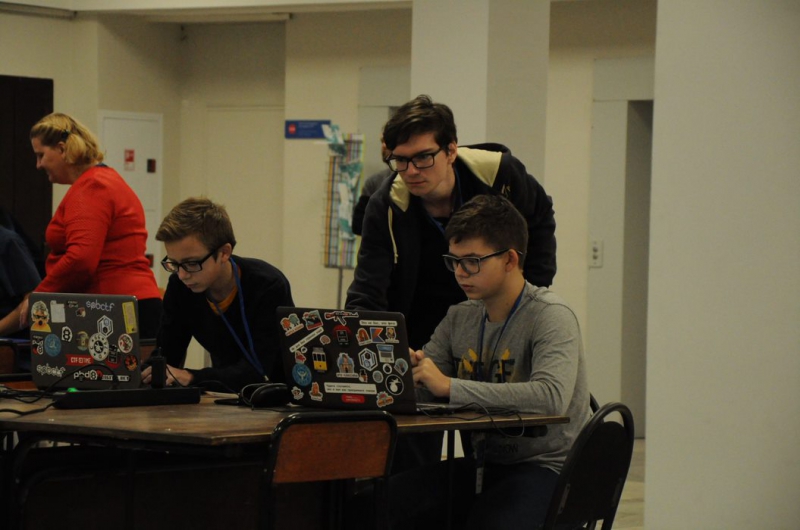 CTF, or Capture the Flag, is a team game testing participants’ ability to protect computer systems from attacks on their security. The event challenges school students to think outside of the box and introduces them to the day-to-day tasks of the so-called ‘white hats’ or ethical hackers.

The CTF games can be held both online and on-site. In the first case, the Internet serves as the main battleground. Located in different parts of the world, the teams compete non-stop for more than a day. During the on-site competitions, participants get together in one place to contend for about seven-eight hours.

Spanning one day, the SPb School CTF-2018 tournament kept to the task-based format typical for other Capture the Flag competitions. Participants had to work out a solution to each task they were set and send it to the judges’ server. All tasks were grouped into several topics such as administration, cryptanalysis, steganography, and the detection of web-sensibilities. The teams were given five and a half hours to solve the tasks.

There were no prequalification contests prior to the main competition: all applicants were given the chance to take part. The CTF rules stipulate that the teams should consist of no more than seven players and be coached by a representative from an educational organization. It is also possible for students to participate in a guest-team lineup. Guest teams compete hors-concours and can’t claim prizes.

ITMO University’s winning team is made up of two school students Artem Zaglubotsky and Yuri Grishin, with Ksenia Kravtsova, a staff at ITMO’s Faculty of Information Security and Computer Technologies, as their coach.

Yuri Grishin started taking part in CTF competitions in November 2017. Artem Zaglubotsky has been engaged in CTF for more than half a year now. He first learned about CTF competitions in February, right before the NordschoolCTF tournament, and it took him a week to prepare. After the competition, Artem started looking for like-minded people, which brought him to the CTF community in St. Petersburg. Joining the community helped him boost his skills, and after a while, he started taking part in other competitions.

“What we found most difficult at SPb School CTF-2018 was web development, so we decided to drop it and focus on other tasks that we knew how to solve instead,” shares Artem. “I think that one of the factors that helped us win was our experience of CTF championships. Besides, since there were only two of us in the team, it was pretty easy to discuss things and make decisions, and we didn’t have to split tasks between many team members.

All the participants received certificates, while the winners were awarded diplomas.

“Faculty of Information Security and Computer Technologies trains highly qualified specialists in such fields as cybersecurity, cyberspace security, data protection, cryptography and steganography, engineering and technical protection, computer forensics, and so on. So it’s only natural that the SPb School CTF competition took place at ITMO. This is the first event of this kind, and we hope that it will lay the foundation for future CTF competitions for school students. The participants enjoyed the competition a lot, which I think is the most important thing!” commented Rimma Labkovskaia, the event’s coordinator from ITMO’s Faculty of Information Security and Computer Technologies.

A day earlier, on October 5, the Spb CTF-2018 finals were held in St. Petersburg in the task-based format. Ten teams took part in the competition. Among the winners are St. Petersburg Electrotechnical University “LETI”, ITMO University's team Fargate, and the Bonch-Bruevich St. Petersburg State University of Telecommunications.