The annual Awards Ceremony has been recently held in the Peter and Paul Fortress to honor the best graduates of St. Petersburg universities. The Acting Governor of St. Petersburg Alexander Beglov, and the Chairman of Rectors’ Union of St. Petersburg and Leningrad Oblast Andrey Demidov gathered to congratulate the young experts. ITMO University was represented by Meruert Nurysheva, a Master’s student at the Faculty of Cryogenic Engineering and Vice-Chair of the International Student Club. 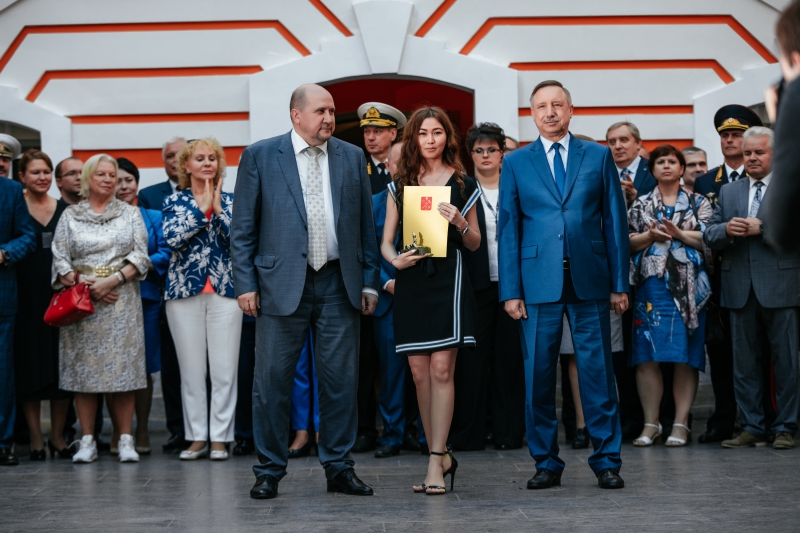 For 17 years already, the city’s administration has been awarding the best graduates of St. Petersburg universities. The annual event starts with the traditional midday cannon salute from the Naryshkin Bastion. After that, graduates, guests and public authorities were invited to the atrium of the Commandant’s Office of the Peter and Paul Fortress to receive the Bronze Sphinx award, handed by the Acting Governor of St. Petersburg Alexander Beglov, who congratulated the graduates on successful completion of their studies.

“There is a multitude of opportunities available. You can choose any company or university to pursue your future career. That’s why I’m encouraging you to stay here, in St. Petersburg. It’s your knowledge and competencies that define the future of our city and country,” said Alexander Beglov.

The graduates received certificates of gratitude signed by the Acting Governor of St. Petersburg, as well as the symbol of St. Petersburg’s Rectors’ Union, the Bronze Sphinx. The majority of the awardees are winners of national and international competitions and recipients of presidential scholarships. Among the winners is ITMO University graduate Meruert Nurysheva.

A Master’s student at ITMO University’s Faculty of Cryogenic Engineering, Meruert Nurysheva was chosen by the University’s Department for Youth Policies because of her excellent academic performance and active participation in the University’s social life: among other things, Meruert Nurysheva was a Vice-Chair of ITMO.STUDENTS. In this position, she was responsible for many projects, including the ITMO.STUDENTS grants and the Buddy System. This system is aimed at helping international students coming to ITMO from Europe and Asia as part of their academic exchange programs faster adapt to the new environment. Russian students, in turn, see this program as an opportunity to communicate with international students and improve their English skills. Meruert Nurysheva says that she owes the victory in large part to her work on the Buddy System.

“I think it’s the commercialization of Buddy System that factored into the Department’s decision: this year, I have managed to attract one million rubles of investments into it. We plan to spend all this money on the further development of the project. Apart from that, at the end of last year, I became the laureate of the Student of the Year Award in the category “Organization of Intercultural and International Cooperation (Tolerance)”. Anyway, I’m really happy to be here today, together with other graduates. It’s a big honor for me,” shared Meruert Nurysheva.