On September 18, an annual awards ceremony was held at the Peter and Paul Fortress to honor the best graduates of St. Petersburg’s universities. Two ITMO Master’s students – Ksenia Oreshkina and Egor Nevezhin – received the Bronze Sphinx awards. Learn more about the ceremony and the graduates’ achievements in this article by ITMO.NEWS. 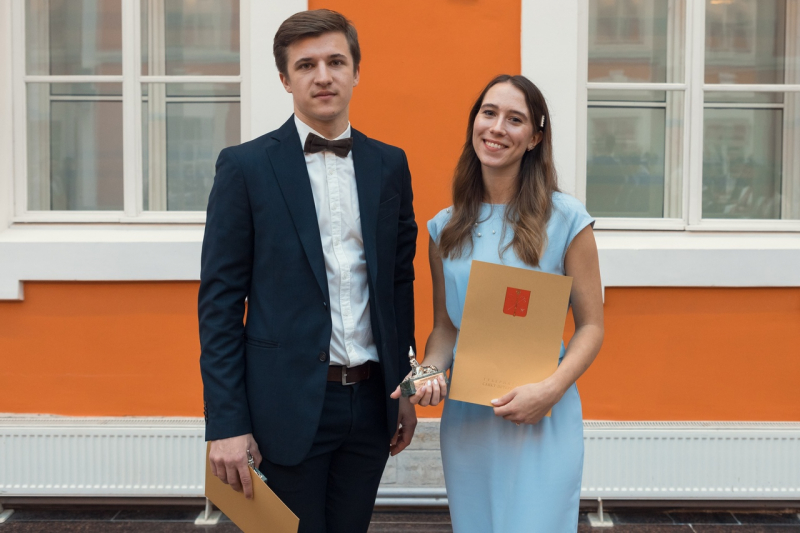 The ceremony of honoring the best graduates of St. Petersburg is a good tradition that dates back to 2003. After internal selection, universities nominate their most active and brilliant students who have succeeded in scientific and social activities and distinguished themselves through good academic performance, victories in international competitions, and as recipients of prestigious scholarships.

The celebration took place in the atrium of the Commandant's House of the Peter and Paul Fortress. Vladimir Knyaginin, Vice Governor of St. Petersburg, rectors of the city’s universities, representatives of student organizations, family members, and friends congratulated this year’s graduates.

“On behalf of the Governor and the city government, I congratulate you on this high honor. In this difficult time, you managed to show your character and retain your personal discipline and fortitude. St. Petersburg is a great place to start your career and personal life, but even if you decide to leave someday, you will forever remember the glorious times of your student years. I congratulate you and wish you professional victories, success, and all the best!” Vice Governor Vladimir Knyaginin said in his congratulatory speech.

The graduates received certificates of gratitude signed by Alexander Beglov, the Governor of St. Petersburg, as well as the Bronze Sphinx awards – the symbol of the St. Petersburg Rectors’ Union as well as of the city itself.

Ksenia Oreshkina works at the Research Center for Optical Material Engineering and is interested in the development of glass-ceramics with nanocrystals of halide perovskites and the study of their spectral, optical, and nonlinear properties.

“From the very beginning, I knew that our faculty supports the undertakings of its students, allowing them to work with the equipment in the laboratory so that they could try their hand and understand their interests better. When I was a Bachelor’s student, I came to the laboratory and from that very moment, I’ve been working there. I was always drawn to practical science; I wanted to do something with my own hands, create something that will then be applied. I think that the secret of my success is responsibility and discipline. If I had to be at the laboratory at 7 am, then I was always there. I was tired but did not pity myself and just continued to make small steps towards my goal. This is the only way, in my opinion, to do great things – little by little, but persistently. I am currently studying remotely for my PhD at the University of Arizona and waiting for the borders to open so I could go there in person. But I don't want to leave ITMO University – I want to get a double degree. As a Master’s student, I received a Russian-European diploma after studying in Finland. I would like to study at American and Russian universities and receive a PhD degree as well as a Candidate’s,” says Ksenia Oreshkina, a graduate of the Faculty of Photonics and Optical Information.

Throughout his studies, Egor Nevezhin was an active member of the ITMO.STUDENTS community: he organized tours, movie premieres, and coordinated volunteers at city-level and national events.

“I took up social work spontaneously. My friends invited me to a clean-up day where I met a bunch of people who started asking me to volunteer and organize small events. Afterward, I started organizing major events: tours around Russia for the student union, coordinated volunteers at large-scale events like VK Fest, graduations, etc. For me, social work has become a kind of relief from my studies: someone chooses sports and I chose to volunteer and organize events. I studied programming, then digital technologies for smart cities and I would love to continue my studies as a PhD student, but in a year. Now, I want to work a little in my field of study and take a look around,” shares his story Egor Nevezhin, a graduate of the Institute of Design and Urban Studies at ITMO.

The ceremony of honoring the best graduates of universities is a calling card of St. Petersburg’s academic world. This annual award allows us to single out the most talented and responsible graduates who, even during their studies, prove themselves to be professionals and leaders. You can learn more about the other winners from ITMO here and here.