ITMO Scientist Andrey Bogdanov Receives Euler Prize from the Government of St. Petersburg and the Russian Academy of Sciences

Andrey Bogdanov, a senior research associate at ITMO’s Faculty of Physics and the head of the Nanophotonics and Metamaterials Master’s program, was recognized by the Government of St. Petersburg and the city’s Scientific Center for his contribution to science. 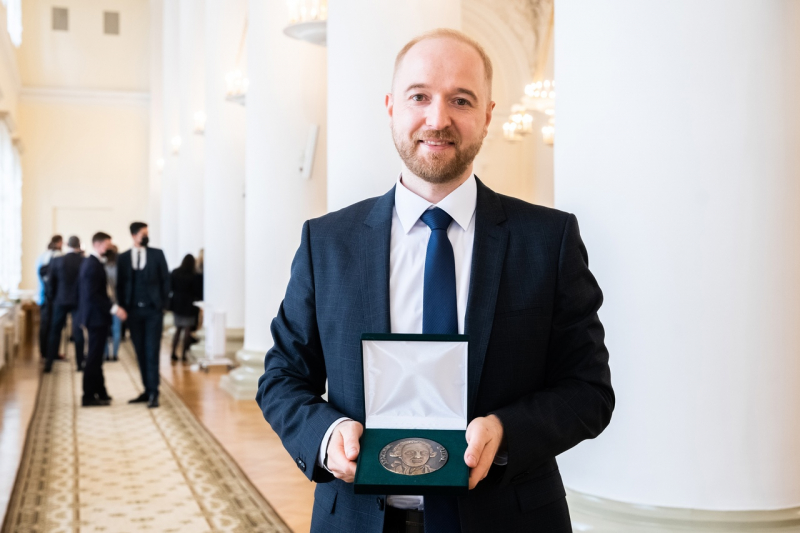 The Euler Prize is awarded to young scientists under the age of 35 for outstanding scientific achievements in the field of natural and technical sciences. This year, six researchers from St. Petersburg became the prize’s laureates. The award ceremony was held at the Smolny Institute where the winners received certificates and a 300,000 ruble prize.

Nominated by the university’s Academic Council, the Council of Young Scientists, or individual academics, the candidates should not only describe their scientific achievements and attach a list of publications over the past five years but also provide a letter of recommendation from prominent researchers.

“This contest is not about money but mostly recognition – the recognition of your results,” says Andrey Bogdanov. “Almost every scientist would like to have a phenomenon named after them, but it doesn't happen often. Meanwhile, such competitions promote science and help young people advance in their scientific careers. Moreover, the holders of this award have no trouble finding grant support for their projects.”

Although Prof. Bogdanov has many research interests, the expert board was primarily interested in his studies on dielectric nanoantennas and nanoresonators for localization and control of electromagnetic radiation at subwavelength scales. As the scientist explains, this is an advanced and vibrant field of research both in Russia and abroad.

“Everyone wants the fastest possible internet connection, cutting-edge computers, and smartphones with the best battery life. Yet today’s gadgets are electrode-based, that is, the information is processed using electrical signals, which leads to Joule heating. As a result, most energy is lost precisely due to heat release. Now, we know how to transmit information using optical signals through optical fiber. This technology has already proved its efficiency: data centers and even continents can quickly exchange data with nearly no losses. Ideally, if it could be done within one computer or even one chip so that signals were transmitted by optical means between the RAM and processor, we could significantly reduce losses and improve the energy efficiency of numerous devices.”

A significant challenge to optical computing is the large size of optical components as compared to their electronic analogs. Their dimensions usually match a wavelength (around 1,000 nm), with the size of the modern electronic transistor being only a few nanometers. Thus, the miniaturization of optical systems is of urgent relevance.

The relevant research has formed nanophotonics, science at the intersection of optics, solid-state physics, and quantum mechanics. Scientists aim to find innovative and effective ways to control light at the nanoscale and develop components for optical computers of the future: nanoresonators, amplifiers, filters, modulators, transistors, and other nonlinear optical systems.

“On the one hand, this is a fundamental field, while on the other – it potentially may acquire practical value. The expert board appreciated the research in this field: the mechanisms of light control, development of nanoresonators, and other optical elements.”

ITMO scientists have been working on nanoresonators for over five years. Some time ago, a research team from ITMO and the Australian National University published an article in Science and several articles in Physical Review Letters. Now, there are also several new publications on the topic. For instance, a group of scientists managed to find a configuration of fields and parameters of subwavelength particles that are capable of fully absorbing the incident light. Another study is devoted to the enhancement of the luminescence from germanium QDs in photonic crystal nanostructures. This discovery may help researchers create effective silicon-based integrated light sources.

Although the exact criteria for evaluating and choosing the award winners remain unknown, the board takes into account not only candidates’ scientific but also pedagogical achievements. Andrey Bogdanov believes that his active work with students has also played a major role.

“Apart from teaching, we also organize annual summer schools in nanophotonics for students from all over the world – METANANO SCHOOL. This year’s school will run on July 19-23 and will be dedicated to the photonics of 2D materials. And it will be opened by the Nobel laureate Konstantin Novoselov.”