This year, Oksana Ivanova graduated from ITMO’s Master’s program in Bioinformatics and Systems Biology among the best graduates. She discussed her experience, current research, and further plans for studies with ITMO.NEWS. 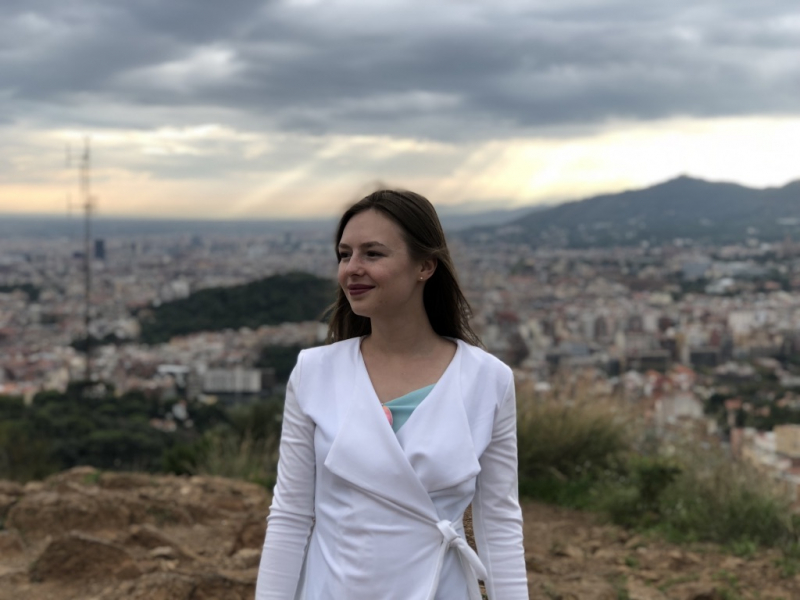 Oksana received her first education at the Institute of Physics, Nanotechnology and Telecommunications of Peter the Great St. Petersburg Polytechnic University. However, she lost her interest in physical and biomedical electronics and was carried away by biology. In her third year of studies, she joined the Almazov National Medical Research Center, where she is still engaged in molecular biology.

This year you became one of the best graduates in the "Harmonious Personality" nomination. Why do you think you were nominated?

I found out about this competition when I was already finishing my thesis. I have had several publications in scientific journals – after all, my scientific career has been going on for four years. Also, during my Master’s studies, I was able to participate in various events: winter, summer schools, and conferences. Apparently, these articles, theses, conferences, gave me an advantage over other candidates.

Why did you choose the Bioinformatics and Systems Biology program?

I was a Bachelor’s student at Peter the Great St. Petersburg Polytechnic University with a major in Medical Engineering – mainly, with an emphasis on physics. I wanted to use this knowledge to create a new medical and biological technology, something groundbreaking. However, there wasn’t enough practice for me, I had to look for it in other places –  and I found it at the Almazov National Medical Research Center.

By the time I was finishing my Bachelor's degree, I had already decided that I wanted to study biology, not physics, and I chose the appropriate Master’s degree. Back then, I didn’t know that there was a new bioinformatics program opened at ITMO University and I was considering different fields of biological education. But I heard a lot about ITMO University – my friends studied there. And when I found out about this program, I immediately applied  –  the symbiosis of biology and mathematics was the best choice for me.

After all, by that time you had already worked at the Almazov Center, how did they react to your decision to do a Master’s?

Extremely positively. Bioinformatics is a rapidly developing area, but at the same time in Russia it is still less advanced than it should be. In particular, the Almazov Center pays great attention to bioinformatics methods – therefore, they are interested in qualified employees who would help increase the efficiency of their research.

What exactly do you do?

I started working with so-called “wet biology”: I worked with cell cultures and performed molecular and biological experiments. When I enrolled in ITMO’s bioinformatics program, I started to dive into the field of sequencing data analysis. Now, I have not personally performed any experiments for a year.

How did you manage to reconcile such a serious job with studies and conferences?

Every time I look back, I wonder where I get enough time and motivation for everything. Because participation in conferences and schools also means a complex process of submitting, collecting documents, and obtaining funding for a trip.

I had to prioritize. When I started, I knew for sure that I wanted to do this, that my priority would not be work, but studies. Since the Almazov Center encouraged me to study, I managed to keep up with everything. Studying in the Master’s program does not take much time – classes are about three times a week. On weekends and free days, I managed to study, work, and publish.

What conferences do you remember the most?

The brightest and most memorable conference was in Athens in May 2019. It was an international conference on heart failure organized by the European Society of Cardiology. I went there with a poster presentation on our joint research with the Almazov Center and ITMO University – the analysis of sequencing data from muscle biopsies of patients with heart failure before and after exercise.

This was my first international conference and so far, and unfortunately, the only one for now. This year I have not been able to go anywhere. I was absolutely delighted with the conference and had a very productive time, despite the fact that I went there all alone and did not know anyone there.

I still remember the Future Biotech winter school in Novosibirsk this year. It was devoted to the study of the genomes of plants, animals, bacteria, and people. I really liked the school: although I did not give any presentation there, I met many interesting people and was greatly inspired by the idea of ​​commercializing biotech projects. It was something new for me.

What did you study in your Master’s?

I am very pleased that there were many applied subjects – each of them involved the implementation of some real tasks. We had statistics, software engineering, discrete mathematics, biotechnology, and systems biology. There was also the Journal Club: we studied new scientific articles and tried to replicate the results. It was a very interesting task because it brought up questions such as data access, processing, and reproducible research.

We had some really cool guest lecturers from different countries. I especially remember the seminars by Maxim Artyomov from Washington University in St. Louis. And also a set of projects prepared by Mike Rayko, for example, on finding a mitochondrial DNA of a common ancestor (the so-called “mitochondrial Eve”) to detect mutations that led to the development of E. coli pathogenicity.

Alexey Sergushichev, the head of our program, helped us in every possible way with practices, projects, term papers – many thanks to him for that.

Have you had any programming experience before?

I had a certain background, but I was never a professional programmer. I knew the syntax of many different programming languages: Pascal, Fortran, C, C ++, Python, but I never excelled, because I just didn’t need it.

What was your Master’s thesis focused on?

My Master’s thesis was done at the Almazov Center. Renata Dmitrieva and Alexey Sergushichev helped me with it. We investigated the effect of mutations in a particular gene on the differentiation of muscle stem cells.

There is a gene that produces a specific protein called lamin. It is part of the membrane of the cell nucleus, that is, it is found in almost all mammalian cells. It is interesting that mutations in this gene for some reason lead to cardiomyopathies, i.e. heart disease, and to the degradation of skeletal muscles. It was unclear exactly what molecular mechanisms are involved in this pathogenesis, and why this particular tissue specificity.

We tried to look at the effect of this mutation on a muscle stem cell. With the help of viral constructs, we inserted a mutant gene into the cells, forced them to differentiate into muscle tissue, and looked at what was disturbed during this differentiation. I used a bioinformatics technique called RNA sequencing data analysis to study gene expression. As a result, we found those molecular pathways that underwent changes.

Do you plan to continue this research?

Yes, I want to continue studying this topic as a PhD student and connect new methods of molecular biology and data analysis, to get to the heart of the matter.

I have learned a lot at ITMO University that will help me do quality research. However, even after graduation, it still seems to me that there are a lot of methods to master. I am going to continue studying biology and bioinformatics and try to expand the possibilities of using bioinformatics methods at the Almazov Center Lab. I know for sure that here, in Russia, in my center, there is still work to do.

Perhaps, when the borders reopen, I would gladly take part in joint international projects. I plan to do internships, collaborate with foreign laboratories, learn something new, or teach myself.

Are you considering any new research areas for yourself?

I want to continue my research project further. It is fascinating to me to study the organization of chromatin in the nucleus, the regulatory areas in our genome, the connection, and the co-regulation of various genes and DNA regions.

Besides, I am also interested in the topic of aging. And those mutations that we are studying are actually related to this topic. So, there is a mutation in this gene that leads to a disease – progeria or Hutchinson-Gilford syndrome. It is also called premature aging syndrome. On average, patients with this mutation live for 13 years, and at a very young age, all signs of aging of organs, tissues, skin, muscles are observed.

Three billion pairs of nucleotides are codes for our entire body. And a single point mutation in one of these pairs leads to the fact that the entire body is aging – and no one understands why. It would be very interesting for me to figure it out.