Last weekend, ITMO University hosted the qualifying round of the Russian Programming Competition for School Children and the quarter-finals of the International Collegiate Programming Contest (ICPC) for students. The events brought together the best young programmers from the North-West of Russia, who competed for the chance to participate in the next rounds of the competitions. ITMO.NEWS attended the tournament and found out what tasks the participants had to solve, as well as how many teams will represent ITMO University at the regional semi-final round of ICPC for students. 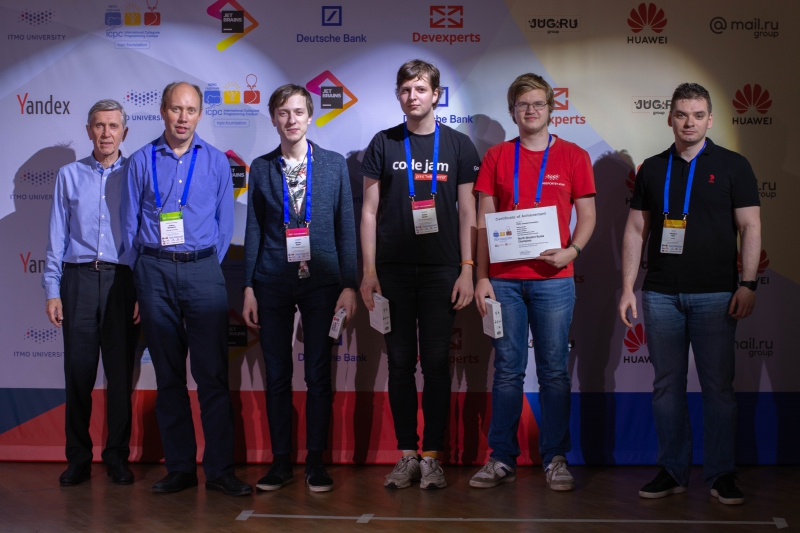 Vladimir Parfenov, Andrey Stankevich and winners of the quarter-finals of the ICPC competition

This year’s regional stage of the ICPC sports programming competition in North-West Russia has become one of the most representative in the history of the competition. For the first time ever, it started with a qualifying round, open for everyone willing to participate. Following the results of the qualification round, a total of 120 teams were selected for participation in the quarter-finals (of which 114 teams from 25 universities made it to the competition).

The quarter-finals turned out to be much more difficult than the qualifying round. And the level of tasks is not the only thing that has changed: starting from this round, all the tasks have to be solved in English, not Russian.

“Unfortunately, this affected the performance of some teams,” says Georgy Korneev, an associate professor at ITMO University’s Information Technologies and Programming Faculty, director of the regional quarter-finals. “We can see this by how much time it takes the participants to solve similar tasks.”

The level of tasks that the teams had to deal with as part of the quarter-finals was also significantly different from the qualification round, which included the simplest tasks possible, so that any participant, regardless of their level of training, could solve at least one task.

“The simplest task in this round had about the same difficulty level as the second or third task in the qualification round. In the end, there were tasks that simply didn’t have any counterparts,” explains Mr. Korneev.

Out of the 13 tasks offered to the participants of the quarter-finals, the winning team representing ITMO University solved 11 tasks. The second place went to the team from the Higher School of Economics, which solved ten tasks. Half of the participants managed to solve at least four tasks and more.

“In general, I am very happy with our performance, but I think that we could do even better. We still have two tasks that we didn’t solve, and I think that we could complete at least one of them,” shares Nikolai Budin, a member of the ITMO University team that got first place.” In my opinion, we owe our victory to regular training.”

Making a strong debut was Murmansk State Technical University. This year was their first time taking part in the ICPC competition, and one of their teams even managed to make it to the semi-finals.

“For their first time, it’s a very impressive result,” says Georgy Korneev. “The last time this happened was seven years ago with a team representing Pskov State University.”

Traditionally, along with the regional round of the ICPC competition for students, St. Petersburg also hosted regional qualifying rounds of the Russian Programming Competition for School Children. Their participants abide by the same rules as those participating in the ICPC championship: teams are given five hours to solve all the tasks, and each team consists of three people. Each task is a mathematical one and requires writing a special program that would solve any task of this kind.

“The first tasks are “nice” ones, and half of the teams solved the starting task in an hour,” says Mikhail Dvorkin, a member of the jury. “And the most difficult tasks are about the same level of complexity as the sixth or seventh task at the ICPC quarter-finals for students.”

Another difference from the ICPC competition is that the participants of the Russian Programming Competition for School Children can bring reference and educational literature with them. Students cannot do that: they can only bring food, drinks, their lucky charms and, if necessary, a dictionary. Violation of these rules can result in disqualification.

This year, the competition brought together some 118 teams from 53 schools, gymnasiums, and lyceums of St. Petersburg. There was no age limit for participation: any student from the first to the eleventh grade could participate.

Even though participation in this competition itself doesn’t give one any perks when applying for international contests or universities, the competition was really tough. This year, two teams competed for the first prize. The team made up of Andrei Efremov (Presidential Physics and Mathematics Lyceum No. 239), Andrey Odintsov (School No. 6, Vsevolozhsk), and Ildar Gainullin (Lyceum at Kazan Federal University, Kazan) managed to get ahead of the team consisting of Sergey Khargelii, Ivan Volkov, and Daniil Pavlenko from Presidential Physics and Mathematics Lyceum No. 239 and the Youth Mathematics School.

The next round of the competition for school children and students will be held on November 29–December 1 in the “Russia is My History” Multimedia Historical Park park. The final round of the ICPC Programming Competition will be held in Moscow in 2020.

The International Collegiate Programming Contest (ICPC) is the oldest, largest, and most prestigious university-level programming competition in the world. Established in 1977, it brings together thousands of teams from over 100 countries competing in regional competitions to earn a spot at the World Finals.