A Guide to the World of Science Fiction

Isaac Asimov, Stanisław Lem, Arkady and Boris Strugatsky, Robert Heinlein, Liu Cixin – the list of sci-fi writers goes on and on. But how can you start your journey to the world of science fiction without getting lost? What is the importance of books in our life? And is it possible to become a genius by reading science fiction? During an online meeting, Olga Lakhtacheva, curator of the LUFF fantasy and science fiction club, and Maria Andreyanova, a popularizer of Ray Bradbury's work and an employee of the library named after Alexander Griboyedov answered these and many other questions. 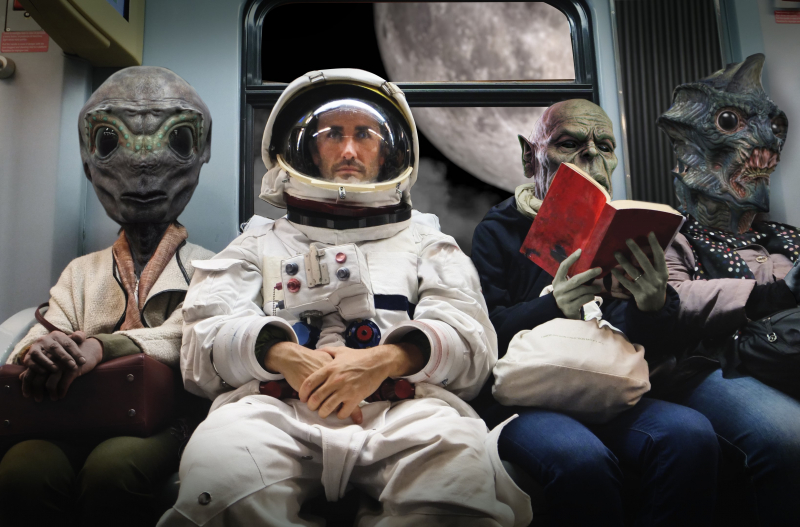 Science fiction is a large body of literature with over 20 different classifications and numerous subgenres.

But it’s not easy to be a fan of science fiction: firstly, people tend to have fairly stable associations with the genre, and often they don’t rush to go beyond what they already know. Moreover, choosing the wrong authors or books – for example, something that seems too dense or overloaded to a particular reader – may entirely discourage beginners to read science fiction.

Take, for example, Ulysses by the Irish novelist James Joyce. This book is full of mysterious allusions and a multiplicity of styles and is considered one of the most challenging books to read. At the same time, it is extremely difficult to discover the world of science fiction if you know nothing about chemistry, physics, astronomy, and so on. The same is true for Ulysses: you simply can’t read and fully appreciate it without knowing its cultural prerequisites.

That’s why if you are going to a bookstore or a library to buy a science-fiction book, do not rush and take the first that comes on a shelf. It’s better to talk to sci-fi fans or turn to a librarian for help. They will tell you where to start, based on the experience of other readers.

When people think of science fiction, they often imagine space travels, aliens, and so on. However, science fiction goes far beyond space. Probably one of its main distinguishing features is that science fiction books are based on scientific facts from physics, chemistry, and other fields. This is a key difference between sci-fi and fantasy.

By way of illustration, let’s imagine that you’re reading a book about a character whose palm suddenly flares up. If it is a science fiction book, the author will elaborate on what is behind this phenomenon, whereas in fantasy novels, things like that cannot be logically explained – so, you simply have to take it as read.

What can you learn from science fiction?

Since sci-fi, even in spite of fiction, is still based on scientific facts, it can also play an educational role. For example, when selecting books for their children, parents are often guided by this fact and choose books that are not only entertaining but also insightful. But can science fiction really teach us something? And what can we learn from it?

Science fiction provides if not a foundation, then at least interest and a desire to dive into science. Why did Ray Bradbury choose the 451 degrees Fahrenheit temperature for his novel? Because this is the temperature at which the paper ignites. Although it is not completely true: the firefighter, with whom Bradbury talked, either miscalculated or accidentally gave him the wrong information. However, scientific terms and references will motivate you to dig deeper to learn the truth.

Some popular writers, for example, Isaac Asimov (PhD in biochemistry), Stanisław Lem (studied medicine), had a scientific background, so they knew exactly what they were writing about. This is precisely why you can vividly imagine the structure of the planet and its processes while reading Solaris.

Probably everyone has come across articles with similar titles on the web. And although it’s just a bold headline, many sci-fi novelists truly somehow predicted the advent of some scientific discoveries and technologies that we use today.

In the Summa Technologiae, the fundamental philosophical work by Stanisław Lem, the author anticipated the creation of virtual reality, artificial intelligence, and also developed the ideas of human autoevolution, the creation of artificial worlds, and many others.

Isaac Asimov is known not only for the famous laws of robotics and over 500 works but also for several surprisingly accurate predictions.

This may have something to do with the fact that sci-fi writers use science for their literary works and are not afraid to suggest: “What will happen if…?” This genre not only motivates people to self-educate but also helps them reflect and dream about what our future will be like – both from the perspective of technologies and philosophy.

If you're passionate about adventures and space racing, perhaps your best choice is the Martian series by Edgar Rice Burroughs, including A Princess of Mars, The Gods of Mars, and other novels with a clear adventure drive.

That’s why the Martian series can be a good start for those who are not used to complex genres and don’t know where to start. It’s an excellent example of a literary work with vivid descriptions, an exciting plot, and a tolerable amount of terminology.

Then you can advance to classic works by Arthur Clarke, Robert Heinlein, and Isaac Asimov. There, you will encounter more serious science fiction, including descriptions of technologies and reflections on their prospects and use in the future. For example, Heinlein has a rather peculiar style (it was noted by numerous critics and readers), so you won’t be able to go on a reading jag but read it carefully, piece by piece.

You may also want to turn your attention to Stanisław Lem, whose anniversary we will celebrate this year. Lem is perhaps the most philosophical writer, and his books successfully blend the tradition of Bradbury (although they were born one year apart) and the more serious science fiction of Clarke and Heinlein. Almost all his works are reflections on a human’s place in the world.

Some might start with The War of the Worlds by H.G. Wells. This book is well-written yet easy-to-read and features a dynamic plot. Not to mention the legend associated with the staging of this novel. The event was broadcast by CBS on October 30, 1938. Radio listeners mistook the play staged by Mercury Theater on the Air for a real news report and believed in a Martian invasion. Other novels for reading are The Time Machine and The Invisible Man.

Russia also has a rich tradition of fantasy and science fiction. If you’re just starting to explore the genre and want to learn more about Russian authors, take a look at The Garin Death Ray by Aleksey Tolstoy. Other iconic names of this genre include the so-called founder of Soviet science fiction, Alexander Belyaev (The Amphibian Man and Professor Dowell's Head) and Ivan Yefremov (The Andromeda Nebula and The Bull's Hour), known not only as a writer but also as a paleontologist.

And, of course, science fiction is greatly associated with the Strugatsky brothers who strived to popularize this genre in Russia. The S.T.A.L.K.E.R series of games and books remain popular even today, although the beginning of the whole universe was laid by the Strugatskys' story called Roadside Picnic.

Among other things, their works are a great example of the genre’s diversity: from a fairy tale, Monday Begins on Saturday, which can also be a great start for getting to know the genre, to almost a detective story called The Dead Mountaineer Hotel. So, the Strugatsky brothers have something for every taste.

The online meeting was organized by the library named after Alexander Herzen. You can watch the complete live stream here (in Russian).