This year, the winning participants of the Congress of Young Scientists were invited to a closing ceremony held in the blocky format of the video game Minecraft. The winners visited virtual classrooms, the assembly hall, and cafeteria, while the most adventurous ventured into the rector's office. The hosts promised that the event would be held in full despite the quarantine, leading them to pick a different approach to the traditional tour of the University. 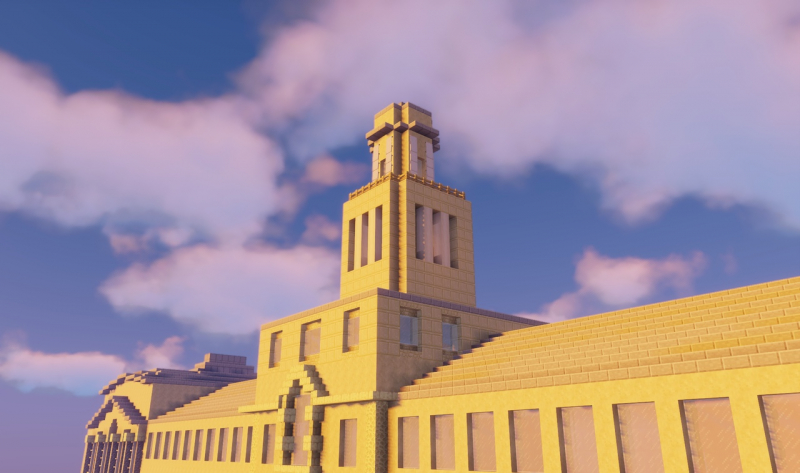 The main building situated on Kronverksky Pr. was built in Minecraft by students of the Information Technologies and Programming Faculty. The developer team includes Alexander Blashenkov, Sergey Papikyan, Leonid Vorontsov, Victor Kukushkin, Konstantin Chukharev and others. In total, more than one hundred people explored the virtual building, walking along its corridors and communicating in the game's chat during construction.

"We started making a virtual copy of ITMO in August 2019. First- and second-year students from the Information Technologies and Programming Faculty wanted to build their own university. Then the idea was postponed and renewed only with the onset of the quarantine, because we missed our university. We did not expect that our idea would be of interest to anyone in the Congress Committee, nor that we would be offered to host the map on a University server and hold the closing ceremony in-game," says Alexander Blashenkov, a second-year student of the Information Technologies and Programming Faculty.

On the day of the ceremony, pixelated fireworks were launched from the main square in front of the University to mark the closing of the 9th Congress of Young Scientists.

Even the event’s participants say it is difficult to believe that they got to play Minecraft while attending the closing ceremony of a scientific conference.

"Everything was cool, they came up with a very creative idea, the fireworks were superb! Huge thanks to the hosts for such an unusual closing ceremony!" says Vitaly Shutov, a fourth-year student at the Bonch-Bruevich Saint-Petersburg State University of Telecommunications, Department of Software Engineering.

"People still don't believe that I wasn’t playing Minecraft, but was there on business! The closing of the Congress was a surprise! Fireworks, a group photo, a tour of the university! And all this in self-isolation, from the comfort of my home. All we had to do is launch the game. Thank you so much!" shares Nikita Rezvanov, a fourth-year student at the Pskov State University,, Philological Faculty.

Even those who had never experienced the game spoke highly of the idea.

"It is a very interesting and unusual idea to transport the interiors and atmosphere of the university into Minecraft. For the first time in my life, I downloaded this game and configured the settings, but it was worth it. Once again, I see that we have smart and extraordinary people here!" notes Nikita Bukhtiyarov, a fourth-year student at the Faculty of Applied Optics of ITMO University.

ITMO University students who took part in the Congress also pointed out that the initiative allowed them to visit the familiar places that they’ve begun to miss while they were in self-isolation.

"I never expected such a closing ceremony. I thought they would mail our certificates and call it a day. At one point, I was so happy that I am a student of such a beautiful university. I was very pleased by the creativity of the event's hosts. Thank you! Sending you hugs!" says Natalya Karmanova, a first-year Master’s student at the Faculty of Infocommunication Technologies of ITMO University


"Our University is known as the most non-classical, and its staff – as the most creative: they were able to hold all events of the Congress in a virtual format at the highest level! The closing ceremony was especially memorable! We all definitely miss the University’s familiar halls, and the hosts of the event were able to brighten up our daily life with bright pixel fireworks of Minecraft near the walls of our almost real ITMO. It's very valuable for me, and I'm glad to be a part of the large, friendly and most extraordinary ITMO.FAMILY,” tells us Mikhail Komarov, a first-year Master’s student at the Infocommunication Technologies Faculty of ITMO University.

The 9th Congress of Young Scientists took place on April 15-18, 2020. The event was held online for the very first time and brought together more than 2,000 participants from 60 Russian cities and over 180 scientific and educational organizations. As usual, the Congress also included special sections for school students. Read more about the youngest scientists’ project in our article