Times Higher Education has published the latest global subject rankings in the fields of Computer Science and Engineering & Technology. This year, ITMO University has demonstrated the best performance of all Russian universities in the Computer Science rankings, whilst also remaining in the global top-100 for the third year in a row. As for the Engineering & Technology ranking, in which ITMO University made its debut last year, the university is among the top-3 Russian universities. 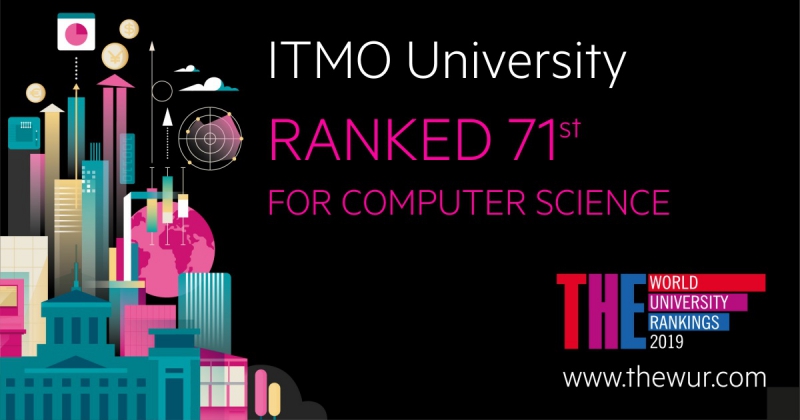 ITMO University’s top qualities, according to THE, were its citation rate, level of internationalization, and academic reputation. Earlier this year, ITMO was ranked first in a national subject ranking in Computer Science compiled by the Expert Analytical Center.

“ITMO University has once again secured a spot among the world’s top-100 computer science universities. This is a vast, promising and highly competitive field that includes (according to the THE methodology) both theoretical and applied sciences, including information systems, computer networks and communications, artificial intelligence, computer vision and image recognition, and a whole slew of others. A university’s performance in a THE subject ranking is dependent in large part on its citation rates. What this means is that success in the ranking is defined not only by how much the university has grown compared to its past, but how much better it is than its counterparts. In other words, this is a genuinely useful assessment of each university’s development,” says Ilya Kuftiryov, head of ITMO University’s Rankings Research Center.

Overall, 16 Russian universities have been included in this year’s ranking; 11 of these are participants of the 5-100 Russian Academic Excellence Project. Second after ITMO University is the Moscow State University (78th), followed by the Moscow Institute of Physics and Technology (MIPT) (101-125) and the Moscow Engineering Physics Institute (MEPhI) (201-250).

The complete ranking can be seen on the official website.

This year, the Engineering & Technology subject ranking has been expanded to include 903 universities (last year’s ranking only included 500). Having made its debut in last year’s ranking, ITMO University has preserved its position in the 301-400 range, while also improving its performance among the Russian universities on the list. Last year, ITMO was ranked the 5th among its compatriots on the ranking; this year it ranks the 3rd, bested only by the Moscow State University (151-175) and Tomsk Polytechnic University (201-250). ITMO University split the third position among Russian universities with the MIPT and Tomsk State University, also place in the 301-400 range.

The complete ranking can be seen on the official website.

All THE subject rankings employ the same 13 performance indicators used by the overall World University Ranking. These are split into five areas: Teaching (learning environment), Research (volume, income and reputation), Citations (research influence), International outlook (staff, students and research), and Industry income (innovation). The individual weight of each indicator is dependent on the specifics of each subject area.

A day earlier, on November 28, 2018, the Moscow International Ranking “The Three University Missions”, a list of the world’s top 333 universities, was published. ITMO University was placed 245th in the global ranking and 12th among Russian universities.

The Moscow International Ranking assesses universities’ performance in three key “missions” that revolve around education (45%), science (25%) and public relations (30%). The MosIUR does not take into account expert surveys, instead using data from Clarivate Analytics, Elsevier, online education platforms Coursera and EdX, international student competitions, awards included on the IREG List of International Academic Awards, and social networks such as Facebook, Twitter, and others.