The Times Higher Education (THE) magazine has published its 2019 subject rankings of the world’s best Computer Science and Engineering and Technology universities. For the fourth year in a row, ITMO comes first out of all Russian universities in the Computer Science ranking, keeping its position in the top-100 best universities in the world. The university has also gone up in the Engineering and Technology ranking, where it appears for the third time in a row. In this subject ranking, ITMO University holds the 201-250 place and comes second after Lomonosov Moscow State University out of all Russian universities. 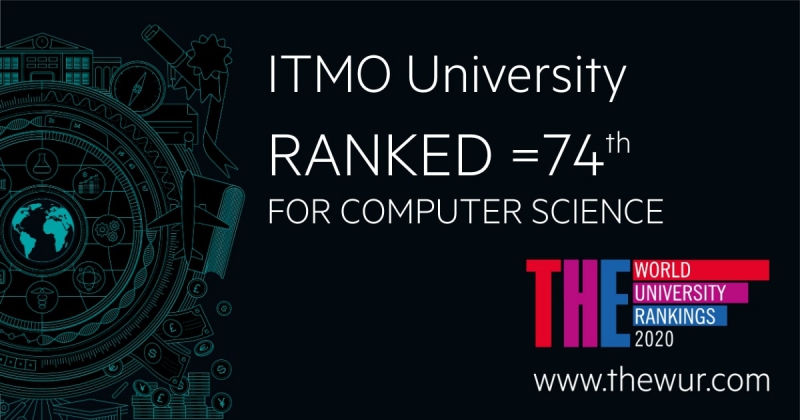 Computer Science – 74th in the world

In 2019, the THE Computer Science Ranking, first published in 2016, has expanded to include 749 universities (last year there were 684). ITMO University came 74th, thus securing its title of the unwavering IT-leader among Russian universities.

“For the fourth year in a row, ITMO forms part of the world’s top-100 universities in this highly competitive subject area, which despite its short name includes a rather wide variety of disciplines – from programming to computer vision and AI,” notes Ilya Kuftiryov, the Head of ITMO’s Rankings Research Center. “That being said, ITMO has yet again come first out of all Russian universities, Lomonosov Moscow State University included. A significant factor in this outstanding result is the growing citation rate of research papers in this subject area: in the field of Computer Science ITMO University’s citation rate is 40% higher than the world average, which is obviously an indicator of the quality of its publications. Apart from that, over the 2014-2018 period more than 37% out of all ITMO University’s scientific publications included international collaborations while the average number in Russia is hardly over 20%. It also demonstrates the academic level of the research conducted here and raises international visibility of the university’s scientific achievements.”

Overall, the ranking includes 17 Russian universities. Next after ITMO University comes Moscow Institute of Physics and Technology, entering the top 100 for the first time with the 95th position. Lomonosov Moscow State University, however, has lost its place in the top-100, now appearing in the range 101-125.

The full results of the Computer Science subject ranking are available here.

The number of universities featured in this subject ranking has exceeded 1,000: this year, it includes 1,008 universities (last year’s number was 903). In the third year of its “residency” in the ranking, ITMO managed to rocket up from the 301-400 place range it had started in to the 201-250 group. This development changed the national subject ranking with ITMO University now coming second (after Lomonosov Moscow State University), sharing this position with Peter the Great St. Petersburg Polytechnic University. Third comes Tomsk Polytechnic University. Overall, there are 34 Russian universities in the ranking.

“THE Engineering and Technology is more of an industry ranking than a subject one, as it evaluates five different engineering disciplines – from chemical to aerospace engineering. Consequently, you can imagine the significant number of universities competing here. Thus, ITMO University’s advance from the top-400 to the top-250 in this ranking is a great achievement,” says Ilya Kuftiryov.

The full results of the Engineering and Technology subject ranking are available here.