ScienceMedia Forum Participants on Their Work and Modern Journalism

ScienceMedia, an annual media forum for student media contributors, wrapped up last week at ITMO University. Selected representatives of best editorial offices came to St. Petersburg to participate in specialized workshops and industry tours. This year, the organizers changed the rule of the contest and held a hackathon, during the two days of which the participants had to come up with a full-fledged longread covering the tours they’d been to. ITMO.NEWS met the students to learn more about their experience of pulling an all-nighter to work on a multimedia project and how this will help them in the future. 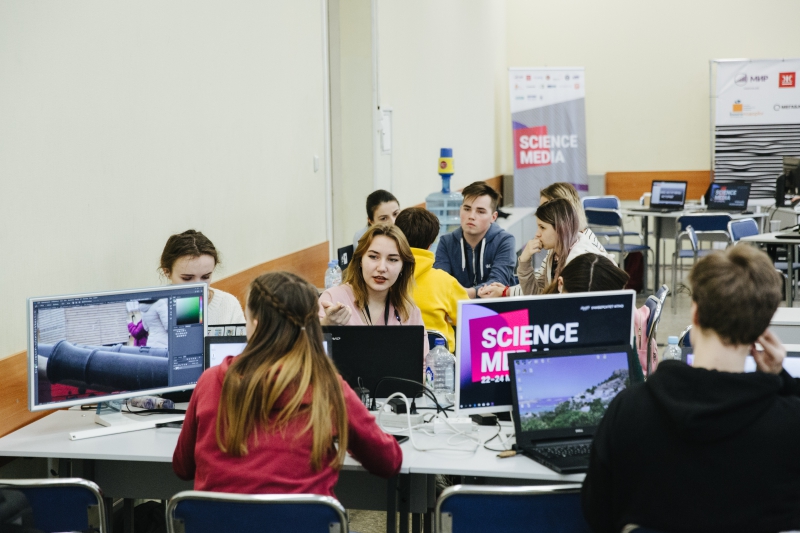 Winner in the nomination “Best multimedia project” (Share Your Brain), first place in the longread contest (Human Touch: How People and Machines Coexist)

We position Razvilka not as a student media but as a media done by students. We’re not about rector’s birthday, student stand-up competitions and promotion of the university. We tell the stories of people you could meet on the streets. It doesn’t matter what these people do professionally and whether they’re successful by society’s standards. What matters is their personal life story.

A year ago, we won a 100,000 rubles grant from Mediavesna (a contest for student media and young journalists). We haven’t allocated the prize money properly yet, but our plan is to purchase various equipment such as voice recorders and lavalier mics, as well as two-year access to paid services on Tilda and WordPress. Some of our winnings will go to creating merch and business cards for our reporters.

We try to publish around two longreads a month. They’re not always in the super multimedia range, like the one we had to create for the hackathon. Rather, our texts are minimalistic: we’re of the view that everything should come in moderation and pertain to the story. For example, it’s only natural that longreads on Russian dialects would include bits of audio, while longreads on hand theater should include video clips.

Each team member of Razvilka aims to do everything single-handedly. If I can’t do this or that thing, I teach myself to or ask a specialist to teach me. We want to create a versatile journalist working on the story from start to finish, from an initial idea to a completed layout.

The longread that have won in ScienceMedia’s multimedia project contest is dedicated to bone marrow and bone marrow donation. Our authors went as far as conducting a journalistic experiment: one of them became a donor and later described his experience in one of the chapters on the final website.

At the hackathon, we were given a task to create a feature about Diakont, which is an enterprise specializing in ensuring security of knowledge-based production plants. One thing they do, for example, is developing robots that find their way into the pipes supplying gas or water to houses, and inspect them. These robots can get into the barrels at the Leningrad Oblast nuclear power plant and seal up a gap to prevent an accident from occurring.

Having been briefed about Diakont, we decided that the only way we could write a good feature was if we honed in on the role of humans in automation, the so-called human touch. We presented their plant through the prism of one person: how people work there, what they do for others, and why I, as a resident of St. Petersburg, personally need all this big science. It was difficult in terms of physically preparing for this challenge: we tried to do our write-up in the most immediate way possible, which means that after we left Diakont, we had two and a half hours worth of recordings we needed to unpack and put to writing straight away.

The team we had was exceptional; everyone knew their line of trade to a T and did it as well as they could. We were helped by a designer named Katya, she was from ITMO, and this was the first time I witnessed a girl writing code, right then and there, sitting just at an arm’s length from me. This was mind-blowing for me, as I have a programmer cousin but have no idea what is it exactly that’s he’s doing.

On the whole, I really enjoyed the media forum. One of its biggest advantages was that the biggest chunk of time was spent on actually doing our projects. We had enough time to create a longread, but not so much that it would be squandered left right and center. There wasn’t a ton of lectures boring the participants out, as it often happens on other forums.

What I also liked was working with mentors, specifically Alexander Koryakov. He highlighted our mistakes and gave us examples of good photographs to inspire us in our work. His advice helped me look at my photographic work from a different angle, and understand what content was worth showcasing to others and what wasn’t.

Now I’m in my third year of studies, which means that I have at least a year and a half left of working in a student media left. As a photographer, I plan to cover as many events as possible, to improve my knowledge and skills. I’d also like to lead student journalism out of bounds of one specific university. This would give students a sense of responsibility for what we’re doing.

Prize for the most original longread (Messages / Diakont)

My major is convergent television, which means that we’re taught elements of everything in the field, from foundations of TV presenting to photography and camerawork. The upside of this is that we have an opportunity of trying our hand at different things, but I want something more: you don’t get in-depth knowledge this way. That said, the workload is more than okay, allowing student enough free time to pursue their interests.

My main interest is TV presenting, so I strive to master my skills and do a lot of on-screen work. Since we launched our university-own media center one year ago, my life has been a constant stream of doing TV reports, broadcasting and shooting things. Apart from that, after I finished my radio school, I’ve been offering lessons on the art of radio presenting to both children and adults. My ideal job would be working on my own project. I don’t care that much whether it’ll be on TV or the internet, what’s important for me is to be surrounded by talented specialists and unite them into one tight-knit team, in a way that everyone would just enjoy the process and wouldn’t feel that they’re stagnating. The project could be at the intersection of being informative and being entertaining, so that people would watch it, laugh but also take away something of use.

The media forum helped me understand how to put my energy and creativity into action to create something new for myself. I’ve read my fair share of longreads, but never actually attempted to do one myself. But here we were thrown into the thick of Diakont’s production process, having been told to do, discuss and put on film everything we’d want. After the tour, we did a lot of brainstorming on what was to be done with all of that material. Every team member was just bursting with cool ideas. In the end, we decided to go with a feature in the form of a social media chat, filling the lack of video content with chroma key, photos and editing.

I really liked the format the hackathon was held in, but I think it would have turned out even better if the teams had been allowed some time to become properly acquainted with one another or just have a good think about the gist of the project, before going in on the tour.

I went into student media because I wanted to more actively participate in university life: to do some volunteering, to organize events and put my drawing skills to good use. Also, I really liked reading articles on Megabyte (ITMO University’s student media –Ed. note), and I’ve always been a fan of what they’re doing with this outlet.

As creating illustrations for articles is the main thing I’m doing, what’s hardest for me is to understand and translate the author’s original concept in the most true-to-form way. Sometimes this requires me to scrap a finished illustration and start anew, but this only boosts my imagination, it’s not an impediment at all.

I think what allowed us to win was our purposeful teamwork; however surprising this discovery might be, teamwork is a prerequisite for success. Our readiness to search for a compromise and meet in the middle helped us create a full-fledged multimedia project in a short amount of time.