A Sunday at the Beach

My name is Violanti, I’m a student at ITMO University and I study Food science & Technology, specializing in "milk products'. I am from a small island in the Mediterranean Sea, called Cyprus. The lifestyle here in Russia is so different that when I compare it with my homeland lifestyle, it is like I’m living two lives in one. But I enjoy both lifestyles! 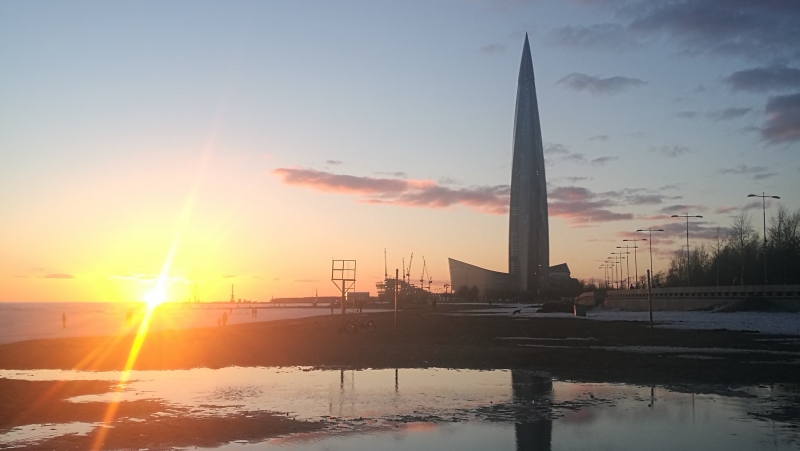 For example, here in Russia, I love to explore new places and experience new things, that I have never experienced before. In Russia you will experience something unique and you will never have the chance to have them in any other part of this world.

A unique day in Russia, was Sunday 24th March 2019/. It was already the first month of spring but here in Russia it was still winter. I have been living here in Russia for 4 years now and for me it wasn’t something unusual. My friend invited me that day for a walk. I wasn’t in the mood but she actually convinced me by saying what a beautiful day it was. Which was actually true, although the temperature wasn’t high at all! In fact, it was the opposite of what you expect on a sunny day. It was approximately -3ºC! You do not actually call it a sunny day with freezing temperatures like that. For me as an island girl, when I say the weather is nice I mean the temperature to be around 25ºC. Anyway I accepted, and we met at the Begovaya metro station. Outside was sunny and the air was really cold, although the feeling was really refreshing. We walked for about 5 min and we ended up at the "300 years' park next to the beach. I had been to that park like a year ago in the summer and I had so happy memories of that day, but I will write about it in another blog post. So, while we were walking closer, I saw people literally walking on a frozen sea! The water had frozen and turned to ice. The view was breathtaking! I couldn’t believe that even the sea was frozen. She asked me if I want to try as well, to walk on ice! Of course I took the chance. While we were walking further and further, I noticed that the people around us were all smiling and happy, taking pictures, admiring the view of the brand new football stadium and the skyscraper. Even a man was riding his bike on the frozen sea. Crazy enough ha!

While the time was passing I was getting more and more excited, even though my body was shaking because of the cold weather. I turned around and saw the sunset. A picture that captured in my mind and I will never let it go, a memory so special and unique! The sun was about to be lost inside to the endless white of the frozen sea. The sun seemed so close to us, I thought that if I will keep moving forward I could touch it. The moment was so magical that is difficult to describe. The sky changed so many colors in a few minutes, like an artist was coloring his canvas and couldn’t decide which one to choose. At the first it was light blue, then came a little bit of purple, then orange and for the ending a chaos of a colorful sky. Then the sun jumped into the sea.

To conclude, it was such an eventful day, walking on the frozen sea. For me it was so strange to walk at the sea and not to swim. The whole experience was worth it despite the cold weather, I do not think that a lot of people have this opportunity to experience such a peaceful feeling of walking on water! To be honest I don’t think that my friends from Cyprus could easily believe that.