Unusual Places Outside of St. Petersburg

The city of St. Petersburg abounds in places of interest and popular landmarks. In the four years of my life here, I’ve visited practically all of the most famous ones, with some of them really proving worthy of the hype. But they all share a significant disadvantage — crowds of tourists on weekends, and sometimes the inability to get anywhere either for free or outside the tour group. Therefore, like many other people, now I prefer to look for less classic routes and places to relax. Here I will try to talk about some of them. 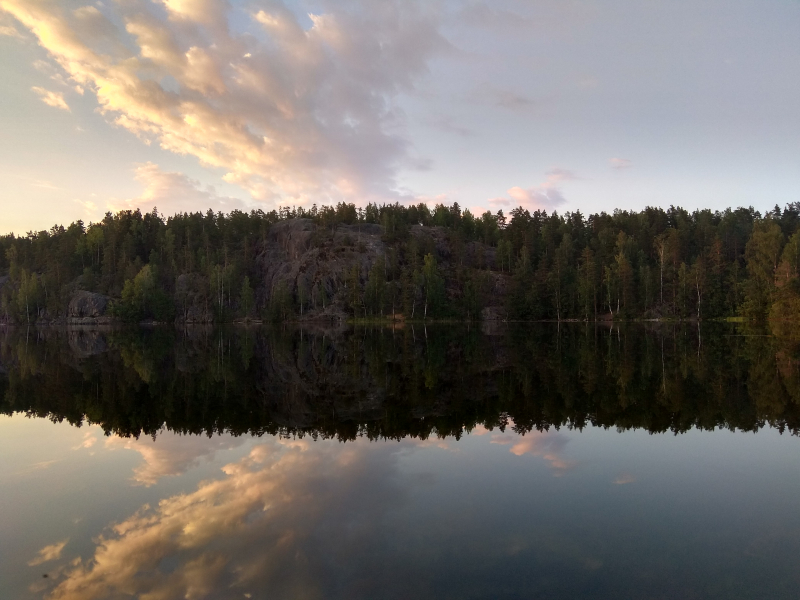 The lake is located near the border with the Republic of Karelia, 10 km away from the railway station of the village of Kuznechnoye. The lake is quite large in length, about 2 kilometers, and is surrounded by almost untouched forests and granite cliffs that reach a height of 50 meters. The lake and its surroundings are designated as a protected natural monument of Leningrad Oblast.

This wonderful place is located away from the urban hustle and bustle. Its remoteness from the city guarantees a minimum number of people, even in the midst of the tourist season. This is a perfect place for a short hike or picnic for the weekend. The lake can be reached by suburban trains. From the nearest train station, you can go on foot along hiking trails or by car, for example ordering a taxi. The water in the lake is clean and warm enough to swim in the summer season. Unlike many tourist camps, there is no infrastructure here, but the place is very clean because no one leaves trash behind. The local fauna is also quite diverse and not afraid of people, so you will have the opportunity to observe wild birds in the vicinity.

Vyborg
This city is interesting mainly due to its unique history and well-preserved architecture reflecting the very diverse periods of the city’s life.

Founded by the Swedes in the Middle Ages, this city has been the only historical settlement in the Leningrad Region since 2010. Until 1940, it was Finland’s second largest city. Among the key attractions are Vyborg Castle, Alvar Aalto Library, and Monrepos Park. In total, more than 300 different monuments are concentrated in Vyborg, and by travelling here for the weekend you can always find something new.

One of the places to visit is the Vyborg Castle — the only well-preserved monument of medieval Western European military architecture in Russia. After a walk around Castle Island, you must definitely go up to the observation deck, which is located under the dome of St. Olav’s tower, as the views from the terrace on the ancient Vyborg are really amazing.

If you come to Vyborg for some good walks, then a visit to Monrepos Park is definitely worth it. The park has a French name which translates as "my vacation". It was thus that this place was called by the commandant of Vyborg, who laid the foundations of the park in the distant 18th century.

The round tower, which is sometimes called "Fat Catherine", is one of the few preserved monuments of ancient Vyborg, one of the symbols of the city along with the Vyborg Castle. The construction of the tower was necessary due to the fact that by the middle of the 16th century, during the era of the Swedish king Gustav Vasa, the stone fortifications of Vyborg, built in the 1470s, had already partially lost their defensive qualities and required reinforcement.

In 1922, the famous Finnish architect Uno Ulberg, the-then chief architect of Vyborg, reconstructed the tower and adapted it to a historical restaurant. Original frescoes on the walls with the coats of arms of ancient noble families, a painted ceiling, stairs and lamps, an old fireplace transport the visitors along the river of time into a distant era.

A weekend trip to Vyborg is a great choice for everyone interested in some cultural enlightenment.

Beaches in the resort area of ​​St. Petersburg

Despite the fact that it is not recommended to swim in the Gulf of Finland, there are many beaches on its shores. In the vicinity of Sestroretsk there are more than 10 such places. Almost every one of them has all the necessary infrastructure for outdoor activities: sports grounds, shops, places for barbecue and cooking, and more. Most people go there in the summer, but in my opinion, for a pleasant barbecue on the coast, it is not necessary to wait for the hot weather. The beaches can almost always be reached by bus and suburban trains in an hour or two. So this is a perfect way to go outdoors for one day.