Some time ago, when I was still in school, I used to think that being at university means that you just need to learn a lot of stuff, attend all your lectures and tutorials and do a lot of homework; and for the most part I was right. But there’s one big part that I omitted, and that is that in one way or another you need to get involved, be a little more proactive. I don’t mean that you have to attend all of the events from the university, nobody does that, it’s impossible to attend them all, not only because you need time for your usual academic work, but because everybody also has a life, however you will have to get involved in some university that probably doesn’t have much to do with your minor or major, but will have an impact on your academic development. 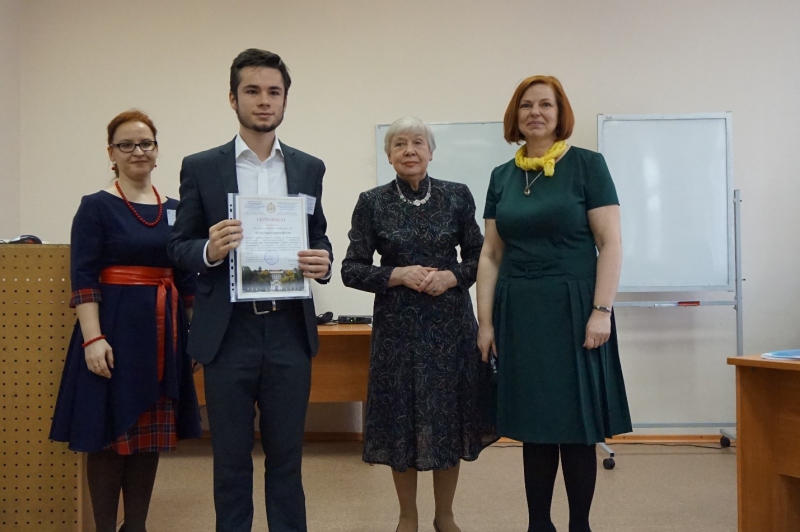 Even if I was already involved in some other events in the past, for me my first real academic event was a conference in which I took part recently. I had been to other conferences before, but never was I the person behind the microphone, nor was I the person answering the questions instead of asking them. My Russian teacher came up with the idea that I should take part in a conference that was for foreign students, and offered me as a way of getting the credit that I need to close the subject in this semester. At first I was hesitant, I am not a person who likes to be in the center of attention too much, and I am not that good at talking, especially in Russian. Eventually, I capitulated, when I thought that I might as well use the experience, while also getting some credit for the subject. Naturally, as this was my first time giving a speech in a more formal setting like a conference, I was somewhat nervous, since I didn’t know what to expect from it. Fortunately, it wasn’t as bad as I believed it would be. It was in fact quite a good experience. Before the conference, I was worrying too much because I worried that I wouldn’t be well prepared, that people would find my speech boring, or that I just wouldn’t know what and how to do what I had to do. All my worries were exacerbated by the fact that I had never given a speech in Russian in front of a live audience. I have spoken in Russian since I was an infant, but I grew up all my life speaking in Spanish, since I only had my parents to speak in Russian with, so I had never had the chance to give a speech or really practice my Russian in some serious scenario like this one. However, all my worries were put to rest, because as I learned when I got to the conference, the other people that were taking part in it weren’t any more experienced than I was, that was really a great relief for me.

I couldn’t just go to the conference unprepared, it’s not like you improvise what you want to say, especially if you need some data or information to back up what you are going to say. So before I was to even put as much as a step in the conference, I had to write a report that would give my speech the structure it needed, and that would remind of all the information that I needed to communicate to my audience. Writing a report, of course, doesn’t mean that you’re just going to say verbatim what you wrote, the report is more of a reference so that you don’t get lost when you’re giving your speech, which believe me, is easier to get lost than you think.

The report that I wrote wasn’t very long, but I do think that ended up being a good thing, since after all, what I was trying to communicate didn’t need a lot of words. This way, with a sort of brief, but interesting and straight to the point speech I managed to better capture the attention of the public, than a longer speech would have. However, writing the report, was just half the work.

And the day of the conference finally came, and I wasn’t fully prepared yet. I had written my report, sure, but I had run a little late on writing, and I hadn’t had the time for my Russian teacher to check and correct any mistakes. To make matters worse, I ended getting up later than I wanted, since I forgot to setup my alarm to an hour earlier so I could have time to go to my university first and get it checked by teacher, and then go to the university where the conference was taking place (yes, the conference was from another university, but students from different universities were invited to participate). So as soon as I got up and looked at my clock showing a different time than I expected, I took off as fast as I can, without even having breakfast to the university.

I arrived at the university, but the teacher was still in class, so I had to wait some time for her to get free. Fortunately, she managed to check it quickly, and as I had feared there was a good lot of mistakes that needed to be corrected, it was really good that I decided to get checked before the conference after all, since I am still not completely confident with my writing in Russian, even though I have improved a lot in the last year.

I had 10 minutes before the start of the conference, and I was 15 minutes on foot from the place I had to be. So I literally ran, blazer and all, to reduce those 15 minutes to just 5. All was good, I made it on time. I was not the first to present, thus I had some time to put my thoughts in order and prepare my mind for my speech. My turn finally came, I took the microphone, greeted the audience, and made a little pause before carrying on. The audience was not big at all, that relieved me since I thought that I would be giving my speech to a big and mostly mature audience in this matter, which as I mentioned earlier, wasn’t the case.

After I started giving my actual speech and just kept talking without giving it a thought, I forgot about the worries that I had before. I even managed to add some insights which I came up with along my speech, that added to what I had already written and gotten prepared to talk about. Eventually, I finished giving my speech, and I felt quite relieved. At the end, some people asked me some question, including the people from the staff, and I answered promptly and without hesitation. In fact, I found that answering questions was easier than preparing my report and giving the actual speech.

A lot of people from many different countries took part in the conference. There were people from all over the world, from China, the US, Romania, Italy, Korea, and many other countries (including Mexico, that is, me). The speeches that were given by the other foreign students were really interesting as well. The Chinese girls liked to give speeches about their culture, which was gave us an insight into how they lived, and how they think. There was also a speech from an American student which I believe was into linguistics, that talked about how it is so difficult to get the stress in the syllable correctly in the Russian language. I truly liked that one, since it allowed me to understand better the situation with that part of grammar in Russian, however it doesn’t make it any less difficult to deal with, I think nothing will, unfortunately.

All in all, the conference was a very pleasant experience, since it was for me like a test ground, that allowed me to get a taste of what might await me in the future if I am to become more active in academic life. It also gave me a chance to hear what other students from other countries have to say. As I said, I am not a person that likes having a bunch of people looking at you and expecting something of you, but I think I might not mind repeating the experience in the future.