The holiday season is at hand, and what better way is there to celebrate than to visit a New Year market — where one can find all of the confectionaries, gift shops, food stalls and ice rinks one’s heart desires? These festivities are eagerly awaited by all and sundry, but none more so than the denizens of our beautiful city, which positively radiates gaiety in these wondrous wintry months. 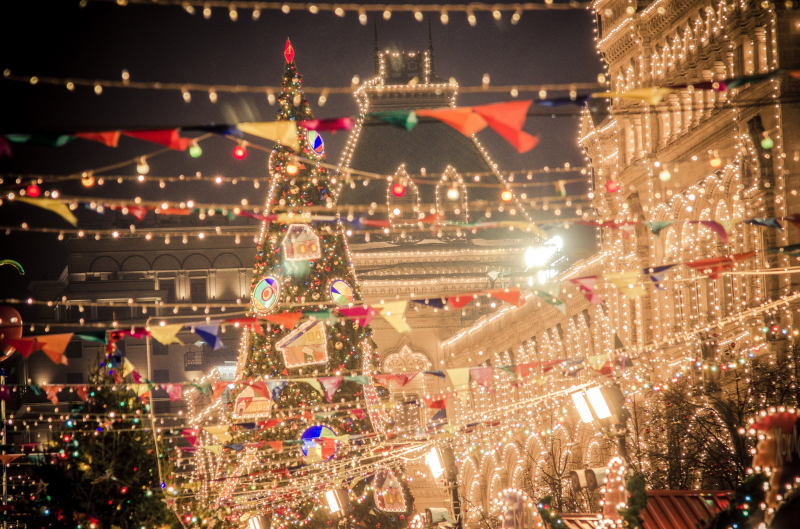 The Russian word "ярмарка" ("market") originated in the 17th century from the German Jahrmarkt (Jahr — year, markt — market). Interestingly enough, the first-ever Christmas market was held in Bautzen, Saxony, so the aforementioned term was borrowed from the most pedigreed lender.

Yet St. Petersburg has its own story to tell with regards to these festive gatherings. Christmas has brought with it entertainment and trade ever since the very founding of the city. Even though the tradition of erecting and decorating Christmas trees was only introduced here in the 19th century, it quickly gained traction, and the Christmas markets became the destination of choice for those in search of sweets, seasonal treats, children’s toys, books, and other presents.

This custom is still observed, with today’s mirthful masses merrily marching "midst myriad market-goers along the storied cobbled roads and historic sites of the city center. So let us now conclude with the Christmas lore of yore and turn to what forums lay ripe for your mercantile conquest this year.

As per tradition, a Christmas market will be held on Manezhnaya Square and the adjacent Malaya Sadovaya and Klenovaya streets — just a short walk from the heart of Nevsky Prospect and the Gostiny Dvor metro station. Visitors will be treated to a dazzling display of bright garlands, magical shops, and various winter attractions. This year’s theme is The Nutcracker.

The square is home to a large Christmas tree surrounded by a host of pavilions filled with decorations, handmade presents, candles and special photo areas, where visitors will have the opportunity to take pictures with fictional characters. The usual stage will this year be replaced by the Balagan Market Theater.

As for food, you can visit the culinary zone with its international cuisine or grab a bite in the market lanes themselves, where you may find unique delicacies.

The daily entertainment program will consist of performances by a range of musicians, circuses, and other artists. This will be complemented by cultural and charity events, stage plays, concerts, meetings with Ded Moroz, contests, and workshops. You may also enjoy a laser show or try your luck on the circus-themed ice rink. The ice rink, carousels and New Year locomotives will all be free of charge.

Yet another renowned spot for holiday shopping and entertainment can be found on New Holland Island. The closest metro stations to this bazaar on Admiralteysky Canal Embankment, 2 are Admiralteyskaya and Sennaya.

New Holland is the only artificial one of the 42 islands of St. Petersburg. It was created in 1719 as a place to store timber reserves, and in 1721 it became Russia's first naval port. It was first opened to the public in 2011 and is now host to numerous cultural and art festivals.

Here, you will be able to find gifts for kith and kin, imbibe the rich atmosphere, and take delightful pictures. The gift kiosks — of which there are 22 this year — can be found around the main entrance and in the courtyards of the historic buildings.

The vast array of merchandise will include dishware, books, clothing, vinyl, toys and Christmas tree decorations. Several food trucks will be located next to these kiosks.

The island will be dotted with Christmas trees, hearths, stars, and life-sized Christmas tree decorations. The younger visitors will no doubt wish to visit the many workshops and plays designed specifically for children and their parents. Last but not least, one of the best skating rinks in the city can be found at the heart of the island.

One of the most breathtaking landmarks in the city also happens to be host to a Christmas market this year. The renowned Nikolskii Market was held on the site annually in the 18th-19th centuries, so this is not altogether surprising.

The oncoming winter brings with it a serene beauty that few places rival. The market square is festive and colorful and filled with an ineffable coziness, with the outdoor activities and galleries creating a jovial Christmas mood.

The market stalls feature a wide variety of souvenirs and meals. Make sure to marvel at the exquisitely decorated 6-meter Christmas tree, drink some hot coffee by the hearth, and take some photographs before you leave.

Another festive little market in the heart of the historic center is the cozy Gostiny Dvor market. Christmas events have been held here since the 1880's. What’s most exciting is that the courtyard of Gostiny Dvor only became open to the public this summer, so this year’s visitors will be at the vanguard in this new age of Gostiny Dvor Christmas events. Note that the market is accessed through an arch from Sadovaya Street.

Visitors will be treated to warm meals, entertainment shows, and theater. Children will want to explore Ded Moroz’s magical house. The market will also be open on New Year’s Eve. The closest metro station is Gostiny Dvor.