As amazing as St Petersburg is, sometimes it can be fun to get away from the city for a weekend. There are many interesting places not too far from the city, and the one we picked for our weekend trip was Petrozavodsk, the capital of the Karelian Republic. 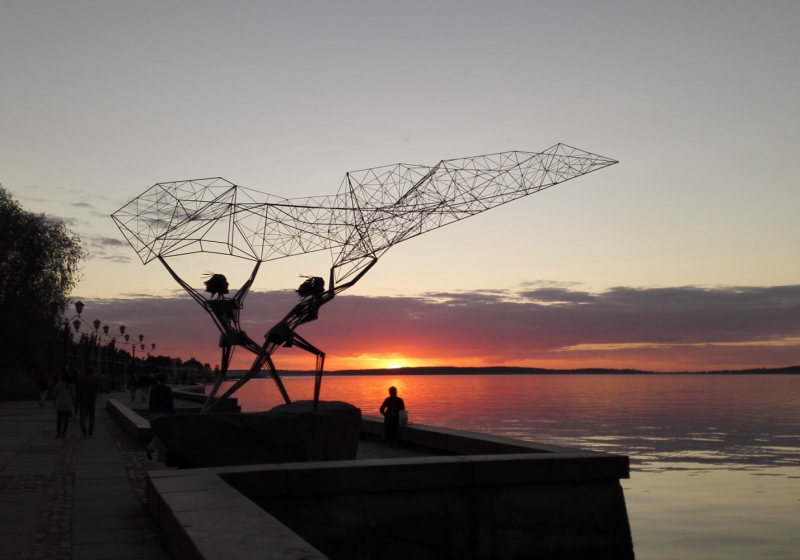 The name of the city already gives you an idea about the history of the city, as Petrozavodsk literally means Peters factory. In the beginning of the 18th century Peter the Great decided that Russia needed an armory factory close to the Swedish border and this kick-started the development of the region. Today Petrozavodsk is a city of 275 000 inhabitants.

Petrozavodsk is located at the lake Onega, a little more than 400 km from St. Petersburg. We travelled there by train; the journey takes from 5 to 7.5 hours. The city is nice and calm with a beautiful boulevard at the lakeside. The nature in the region is especially fascinating with thousands of lakes and islands, peaceful forests and swamps. There are a lot of possibilities for daytrips in the area.

The region, Karelia, was historically inhabited by finno-ugrian peoples such as Karelians and Vepsians. This is why for me as a Finn it was especially interesting to visit the region. It feels like Russia with a little Finnish twist! Karelians still make up more than 7% of the population of the republic. In the center of Petrozavodsk I found the statue of Otto Wille Kuusinen, a Finnish communist politician who fled to the Soviet Union and made a career there.

During our weekend in Petrozavodsk, we managed to make two daytrips. The first trip we made to the state natural reserve Kivach, which is one hour drive away from the city. Here we saw the most iconic view of the reserve, the Kivach Falls. Also we had time to visit the museum of the reserve which displays the different flora and fauna of the region. For example Karelia has a special type of birch tree which is very valuable. It is called the tree of tsars as they used it for their parquet floors! For the second daytrip we decided to visit Kizhi, an island 1.5 hour boat ride away. On this island there is the famous Kizhi Pogost, an ensemble of two wooden churches and a bell tower from the beginning of the 18th century. However, the Pogost is not the only attraction of the island, as more than 80 historical wooden structures have been brought there from the surrounding areas to make a huge open-air museum. Here you can observe how people have lived in the region in the past centuries. The Pogost has the official status of world heritage by UNESCO.

We went to Kizhi on a sunny Sunday so there were lots of people taking the boats to get there. We were afraid that the island would be very crowded. Once we arrived we understood that the island is big enough so that all the tourists would disappear to its different parts. Perfect for feeling the calm, mystical atmosphere of Kizhi! After the weekend in Petrozavodsk we arrived to St. Petersburg with a lot of new memories, ready for another interesting week in the city!