Living and Studying in Brussels: The Heart of Europe

I’m an exchange student, currently living in Brussels, Belgium. This city is full of contrasts and is proudly called "The Heart of Europe". It is a curious place to live in, I still haven’t figured out what is Brussels and I’m on my way discovering what is Belgium. 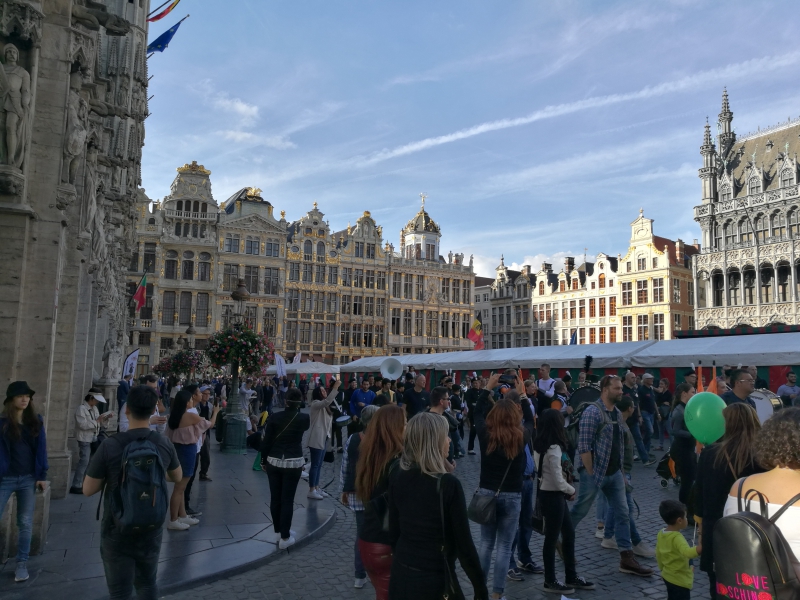 Before moving to Brussels for an exchange semester, I faced the only reply from my Belgian friends: "Eh, Brussels… But why? Well, at least it’s easy to travel from there". It was quite clear that Belgians are not fond of this city, at least, most of them. When I arrived myself, it took me a while to understand what they meant when saying "Brussels is not Belgium". In fact, it took me trips to Bruges, Ghent, Putte and Leuven to understand it. Indeed, Brussels looks more like a copy of Paris mixed with some Belgian features like two official languages (one of them is French, ha), fries, beer and waffles rather than a capitalised representation of Belgium.

Belgium itself consists of two very different parts — French (Wallonia) and Dutch (Flanders). There’s also a small German part, however, Belgians don’t consider it as a separate part of Belgium. So far, I’ve discovered only the Flemish part of Belgium with trips and getting to know the culture. The only thing I got to know from the French part is Liege waffles. The relationship between these two parts of Belgium is best described by a quote from "King of Belgians" movie: "Is Belgium a country or a geopolitical compromise? I don’t know". Anyway, Belgium promotes itself as the centre of Europe, home for hundreds of cultures, nationalities and languages and a place with dozens of career and investment opportunities.

The environment here is indeed very international. You’re more likely to meet an expat than a Belgian person. Due to the high immigration rate and flow of tourists, English is spoken nearly everywhere and by everyone, however, surprisingly I use my Polish almost as much as my French.

Besides life routine, there’s also a lot to tell about studies. I’m studying at Vrije Universiteit Brussel, which is a Flemish university, a former part of Universite Libre de Bruxelles. It is a young university with diverse research and study fields and nearly 20% of international students. I’m studying at the Engineering faculty together with students of European MSc in Photonics program of both first and second year. Again, only 3 Belgian students are there, all the others are international — Egyptian, Ghanian, Indian, Spanish, Iranian, Albanian, Italian, etc. What is great about having a bunch of different cultures around you is learning from each other and discovering a new place and new lifestyle together. Quite a few things were unusual to most of us here in Brussels. Like shops closing at 8 pm and not working on Sundays. Where is my 24/7 shop around the corner? Or "Museum Night" called "night" but closing at 10 pm. What?

The studying approach encouraged here at VUB is similar to what I’m used to at my home department of Applied and computer optics at ITMO (now part of the Faculty of laser and light engineering). Students are encouraged to discover things, encouraged to discuss, argue, ask questions, come up with what’s interesting for them. As an example, a course on recent trends in photonics consists of an individual project which is a 45-minute lecture on a hot topic in photonics. Students are free to choose the topic as long as they can justify its "hotness". The professor delivering this course is Vice-Rector for Innovation and Research. It’s both exciting and challenging. As another example, within a course on optical design of non-imaging systems we have an individual course project that we have to come up with ourselves — whatever non-imaging system you’re interested in.

Generally, a lot of effort is invested in students' encouragement in the learning process, in learning more and learning critically. One thing I find missing is actual scientific research and contribution by students. They are only given their MSc thesis topic at the beginning of the second year and, in fact, they are working on it during the last semester only. It’s nothing like the situation with my thesis at my home department. Students here are getting prepared for conducting scientific work, to give presentations and designing posters for conferences, however, it’s not common sense to start working on your topic right away and publish and present your work even before graduation.

One more striking difference is the examination system. VUB has a practice of only (or mostly) oral exams (which is a common thing in Russia), however, it turned out that for all the international students oral exams are a completely new thing. That is striking. I was so surprised none of the newcomers had ever had an oral exam before. Being aware of that, the department organises trial exams in the middle of the first semester, so that students can try it out and build more confidence before the actual exam. There are a lot more peculiar things related to grading and studies that deserve a separate post.

I can surely claim that experience of academic exchange is enriching and worth all the efforts invested!