I’m an exchange student studying in Brussels and here’s my attempt to give an overview of what is Belgium higher education system is on the example of Vrije Universiteit Brussel in Brussels. This post is written with the help of my classmate, David De Vocht — thanks a lot for your help! 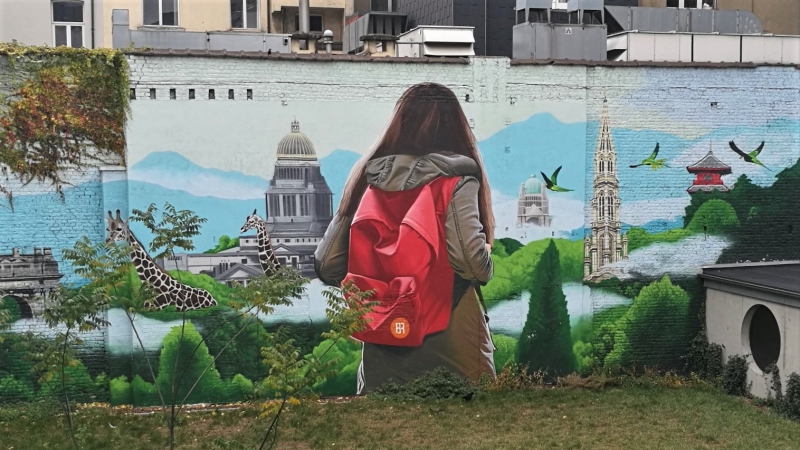 Graffiti in the yard of Brusello student residence where I live

I’ve already mentioned some peculiarities about studying in VUB in a previous post, now let’s have a closer look at higher education in Belgium. The academic year here started later than I’m used to (which was definitely helpful for the visa process, ha) — on 17th of September. The first week was dedicated to introductory events and classes started on the 24th of September. By that time the first month of studying in Russia is almost over, right? On that very first day at classes, there was a kick-off session with students of European MSc in Photonics where the learning process and upcoming events were explained. It was quite helpful in the sense that it gave a clear overview of what’s ahead. What was explained there?

1. Grade system
Belgium has a grading system I’ve never heard of before. We’re used to 2 to 5 or 0 to 100 in some cases, here it’s 0 to 20. Unexpected, right? The clarification on grades is the following:

We were warned that if we’re used to scoring the highest possible in our home universities, here it’s not needed and doesn’t happen normally. Some professors simply don’t give 20/20 to students. It was quite an unusual perspective to hear that Belgian student would jump out of their pants if they had 16/20. To my regard, it’s completely different to the mindset we have in Russia.

One important thing to consider about a grading system like this one — it’s more elaborate than the 2−5 one. It gives a comprehensive number of where you stand with your work, still giving a chance to pass with distinction from 70%.

The final grades for most of the courses are a combination of grades from semester assignments (project exercises, individual projects, lab work, group work, etc.) and the exam. For example, in the course about the optical design of non-imaging optical systems 6/20 is given for project exercises and 2/20 is given for the course project — the exam is left with 12/20 total contribution to the final grade. In my opinion, it reduces the randomness of the exam grade by giving a student a starting point, lower than which they won’t get.

It depends on the field but Photonics students are entitled to be part of the industry and thankfully are provided with internship opportunities. Even though the industrial internship is included in the curriculum in ITMO as well, I have to say it’s nothing similar. Here students can choose between min. 5-week (4 ECTS) or min. 10-week (10 ECTS) internship scheduled for their summer break in between first and second years of MSc. Luckily, Belgium has a wide range of cutting-edge companies in the field of photonics (examples can be found here).

Another amazing thing about the connection to the industry is company visits. For example, there’s a visit to Nokia Bell organised within Recent Trends in Photonics course. How cool is that?

I can’t say that Russian universities are not connected to the industry. What I can say is that most of the times the connections are related to military-tailored production. Here it is civil, university or company based, business- and science-driven as a rule and not an exception.

The structure of studies is represented in the picture below. The first year is packed with compulsory courses and 8 ECTS to choose electives from Advanced Photonics list. The third semester has only one compulsory course and all the others should be chosen from the electives list. It’s also encouraged to take up some courses from outside of photonics field. The last semester is fully dedicated to thesis writing.

Besides the fact that the academic year starts later than we’re used to, the academic calendar looks more or less the same — exams in January and June, holidays here and there. There’s no "examination week" (зачётная неделя) as there’s nothing to be passed before the exam besides submitting your assignments. Does it mean that there’s an exam for every course? Oh, yes, it does.

One major difference from the Russian academic calendar is the so-called "resit" period. It’s time at the end of August — beginning of September for students to pass the exams they failed before during the year. Yes, there’s only one timeframe for it. If there’s a failed exam in winter, one can only repeat it at the end of summer.

What else is interesting about studies in Belgium? Language, that’s for sure. I asked David about the language of studies and how it is determined for a degree program and he replied the following:

"It depends on the field you are in, I can’t say the same for a lawyer or a doctor, as I can do for a scientist or an engineer. The lawyer and the doctor have to work with the local people, so they have to master the knowledge in their own language. But for an engineer or a scientist, most of us think that using the global language can be more beneficial because the whole research is done on a global scale. In Belgium, you will not find any Dutch paper or a good Dutch textbook (on a university level). As an engineer, you don’t choose for a Dutch MSc."

When I asked him about BSc studies, the interesting thing was that the biggest choice to be made is either secondary school or college/university. In Russia, university is still the most popular choice, when college education is just getting its visibility and image. David chose engineering BSc as it seemed general enough to figure out his interests on the way and choose MSc program according to it. The first division according to interests happened in the third year and David’s group was biomedical, electrical and photonics engineering. Regarding the electives, there was one course to be chosen between English and one related to the field. David claims that it’d be useful to choose a major and a minor or at least more introductory courses in order to have a bigger overview and be able to make a better decision for MSc and future.

In the end, I asked him the following: "Is VUB a typical example of higher education in Belgium?" He replied with:

"The VUB is a good example of a university in Belgium, but actually, it is even a better example of Belgium itself. Maybe we are one of the small ones, but this is what led us to an international mindset. A mind who wants to collaborate with others, both universities and students. I can now proudly say that I am in a class with 15 international students all interested in the niche of photonics engineering."