How should the older generation adapt to societal changes and stay up to date on the latest in health and culture? This is a question that the online platform Third Age University aims to answer. The project was developed by specialists from ITMO University; recently, they were also joined by GUP TEK – a state unitary enterprise that provides approximately 48% of all fuel and energy services in the city of St. Petersburg. ITMO.NEWS found out about the project’s results so far and its future plans for development. 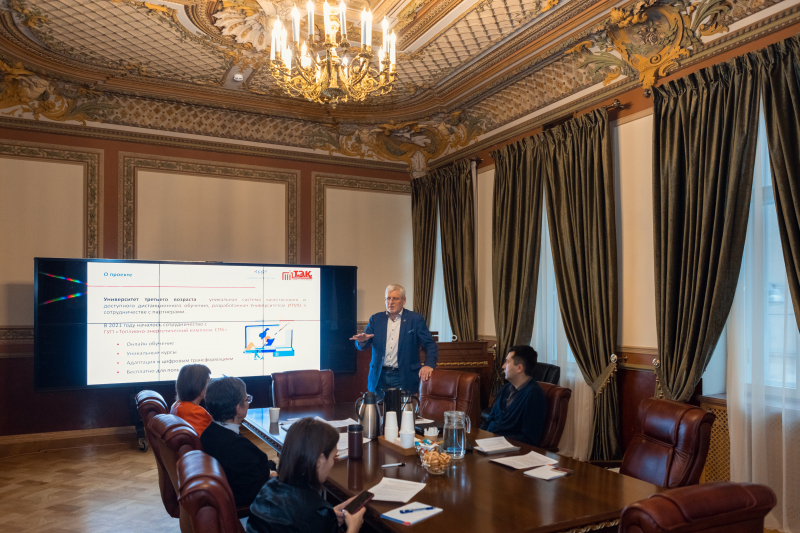 At an expert seminar on the prospective collaboration between ITMO University and GUP TEK SPb. Photo by Dmitry Grigoryev / ITMO.NEWS

The story of Third Age University began in 2009, when ITMO University partnered with a non-governmental organization and a local social support body on a pilot project – a distance learning system for the elderly that helped them adapt to digital technologies.

“At the same time, ITMO began collaborating with partners in different fields. One of them was Svetlana Chernysheva, the creator of the Third Age School program, which allowed senior citizens to explore information and communication technologies. It was then that the idea emerged of launching an educational platform that would be used by centers all over the country,” says Andrey Chugunov, the head of ITMO University’s eGovernment Center.

As a result, ITMO launched an online distance learning portal. In 2010-2011, it was used in two international regional partnership programs focused on social support for the elderly. In 2014, a five-year study, titled Models of interaction between society and the elderly: a study of the opportunities for social inclusion, was launched by the Russian Science Foundation; as part of this study, a team from ITMO’s eGovernment Center, headed by professor Irina Grigorieva of St. Petersburg State University’s Faculty of Sociology, worked on the various issues associated with adaptation of senior citizens. The goal of the project was to develop a “normative aging model” that balanced the interests of today’s society, the economy, the state, and the seniors themselves. The Third Age University portal was used as an online platform for social surveys and to publish the results of studies.

“Retirement is a medium for discrimination, and in the context of today’s society I don’t consider the desire to retire as soon as possible a very healthy one. There is such a metric as the rate of death in the first year of retirement: men are especially affected by feelings of shock and emptiness because they feel as if they are no longer needed,” comments Irina Grigorieva.

In 2021, the portal entered its next stage of development. A new team from ITMO’s eGovernment Center overhauled the portal, adding relevant features made necessary by the pandemic as well as educational and informational modules; they also outlined the portal’s main mission. Its goal is to help senior citizens to quickly adapt to the modern world of online communication and maintain an active lifestyle. According to experts, these two factors are key to healthy aging and will allow members of the older generation to live longer independently and without relying on long-term specialist care. In addition, the team has produced a variety of educational content for those residing in St. Petersburg or visiting the city. Users can find out about various events in culture and health, as these two categories are of particular value to them – especially during the pandemic.

Work on the portal was also compounded by research done as part of the project BaltSe@nioR 2/0 under the aegis of the European Union’s Interreg Baltic Sea Region program. The project brought together ITMO and other partners from 11 Baltic region countries.

“The portal is designed to familiarize employees with the company’s digital transformation efforts. As a socially responsible enterprise, TEK does everything necessary to ensure that both the young and the more experienced specialists are able to develop their professional skills and acquire new knowledge,” says Ivan Boltenkov, the general director of GUP TEK SPb.

Right now, the Third Age University portal is an accessible distance learning system for older users. Available on the website are textbooks with photographs and illustrations, developed by teachers from ITMO and St. Petersburg State University. There are also free online tours of cultural landmarks in St. Petersburg and other cities, as well as around a dozen courses on health, nutrition, financial security, Russian culture and language, and life in modern society.

“The definition of “third age” is a relative one: there are those among the elderly who still work and maintain an active lifestyle and there are those who, due to a variety of circumstances, including the pandemic, are limited in their activity and the satisfaction of their needs. We examine the things that senior citizens need and provide courses that would help them,” explains Irina Tolstikova, a coordinator of the project.

As part of GUP TEK’s participation in the project, a separate section was added to the company’s website that can be accessed using a corporate email address. It provides company staff with a collection of news stories, texts, and lectures on topics including the latest trends in digitization (AI, big data, virtual avatars, and smart cities), as well as a photo gallery on the history of St. Petersburg’s heat supply and the company itself. Courses for employees are sorted into three learning tracks focused on “age consciousness,” adaptation to St. Petersburg’s cultural environment, and positive interactions in the workplace. Every user can choose a module consisting of several courses and take them in any order and at a preferred pace. At the end, a test survey is provided; if 60% or more of the answers are correct, the user receives a certificate of completion from the company.

“When someone joins our company, they need to understand its history and structure; it often happens that colleagues from different departments don’t interact with each other all that much. This portal will help them see the company from a more global perspective. Besides, we have a lot of staff members who have come to St. Petersburg at different times and are interested in finding out more about the city’s cultural life. Obviously, this information can be found online, but not everyone knows how to do that, especially among members of the older generation. That’s why I believe that there is a benefit in offering optional courses to support our employees’ holistic development,” says Tatiana Rybakova, head of GUP TEK’s learning center.

In the future, ITMO and its industrial partner plan to expand the list of courses, make the website more accessible to people with visual impairments (through Braille and high-contrast versions), as well as add a content management system to allow staff of the company’s learning center to form modules out of existing courses based on employees’ needs. In addition, GUP TEK and the university are working on an educational program for the company’s longest-serving employees.