St. Petersburg State Construction Supervision and Expertise Service has issued its approval of the construction of ITMO University’s campus on the grounds of the ITMO Highpark research, education, and innovation center. 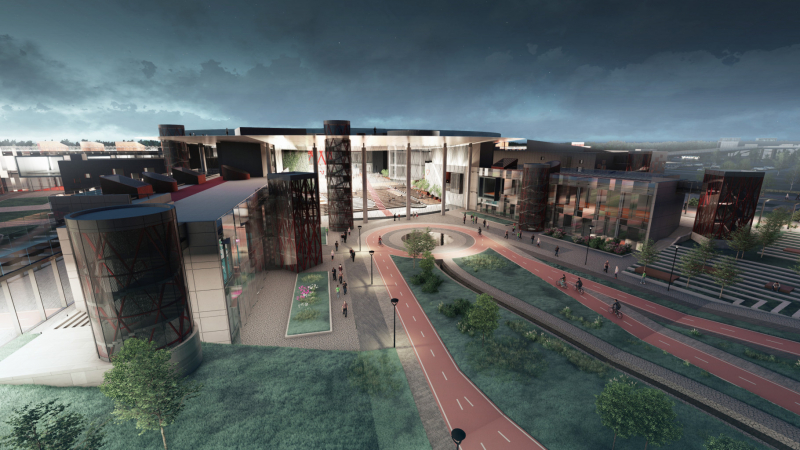 Construction was approved for the main academic building and one of the two planned dormitories, all of which are included in ITMO Highpark’s first construction stage in the satellite city Yuzhny.

“This document marks the start of a new stage: the launch of the construction bidding. We are planning to complete the engineering preparations of the area and commence with the construction of the main building by the end of the year,” says CEO of ITMO Highpark JSC Andrey Nazarov.

An ensemble of nine buildings with a total area of 32,700 square meters will make up the main building. On top, all nine will be united by a disc-shaped roof with an athletic track and a sports area. Apart from offices and lecture rooms, the building will house coworking spaces, an industrial laboratory for express prototyping of new devices, a digital library, a food court, book and souvenir shops, as well as carsharing and kicksharing parkings. The main feature of the building will be its transforming atrium, which can be easily turned into a conference hall for 2,000 participants.

The first dormitory building will have an area of 18,800 square meters and will include primarily one- and two-bedroom apartments, each equipped with its own kitchen and bathroom. Additionally, there will be high-accessibility apartments for people with disabilities.

Yuzhny satellite city will be developing alongside ITMO Highpark, meaning that a residential area with social infrastructure will be built near the campus, with a part of the apartments made available to ITMO Highpark’s residents.