ITMO University and the University of Amsterdam (UvA) have continued their long-time tradition of cooperation and extended their partnership agreement for another five years. The document noting the two universities’ collaboration was signed by ITMO’s Rector Vladimir Vasilyev and President of the UvA’s Executive Board Geert ten Dam. The partner universities will not only continue working on their collaborative projects, but plan to strengthen their cooperation in regards to training postgraduate students on a shared educational program. 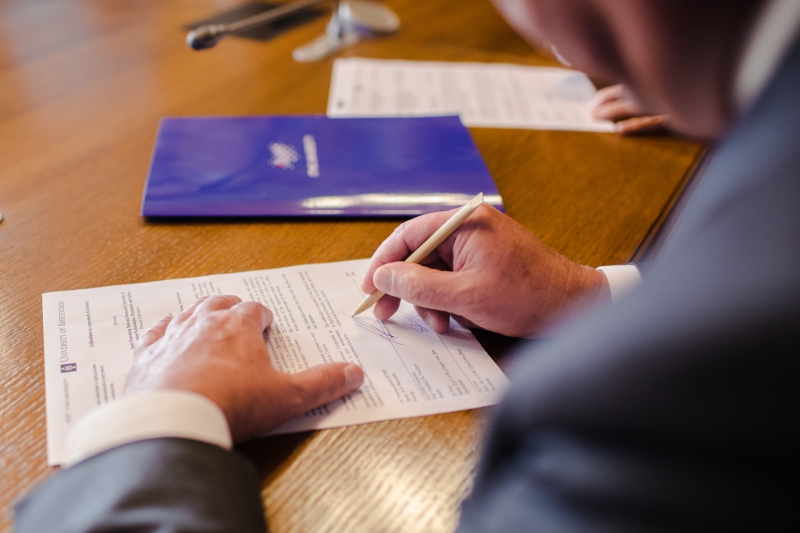 The University of Amsterdam is considered a pioneer in the field of training specialists in Computational Science and has been collaborating with the eScience Research Institute since 2007; starting in 2012, the university has taken part in a double degree program with the High-Performance Computing Department. The selection process for participants in the program is strict, yet each year more and more of ITMO University’s students receive two diplomas from both universities. In 2016, nine such students graduated from the program. The Master’s students have a well coordinated study plan: UvA knows which subjects the students have already studied at ITMO and recognizes the 60 ECTS credits they received in their first year of education. For the students’ thesis defense, a committee is formed from representatives of both universities. UvA delegation with ITMO staff during their visit to St. Petersburg

This partnership had its roots in scientific collaboration. The two universities had been developing a project on the topic of distributed emergency computations for decision support in critical situation, led by Alexander Boukhanovsky and Peter Sloot, professor at UvA, ITMO University and the Nanyang Technological University (NTU Singapore). At the same time, the Advanced Computing Lab (ACL) was created.

In 2013, the TROIKA (Technology and Research on Information-Driven Knowledge Alliance) was founded under the umbrella of eScience Research Institute; the alliance includes a number of international universities, with the core members being ITMO, UvA and NTU.

In the past five years the partnership resulted in several notable scientific accomplishments. For instance, in December of last year the universities presented the “virtual artery”, a multiscale computer model of the human artery that combines several sub-models of the cardiovascular system in different levels of complexity. In that same year, researchers from UvA, ITMO, NTU and the Indian Institute of Science conducted the massive Kumbh Mela Experiment in which they collected data on crowd behavior at the world’s largest festival. These are just a few of the projects that are created by staff and students from both universities. Aside from research, the partners also collaborate in the field of education: since 2012, they have been organizing the annual International Young Scientists Conference in HPC and Simulation as well as a corresponding Summer School. The most recent conference took place at the AGH University of Science and Technology in Krakow.

The next stage of the partnership is the development of a shared postgraduate program. It should be noted that all double postgraduate programs at ITMO University are unique in that they are formalized by a three-party contract in which two parties are the participating universities and the postgraduate student represents the third. These programs entail the assignment of two scientific supervisors, the conducting of experimental testing on the grounds of both universities and a double thesis defense with certification committees from both ITMO and the partner university.

We add that the visit from the representatives of the University of Amsterdam coincides with the twenty-year anniversary of Netherlands Institute’s work in Russia.