Can school students predict the outcome of e-Sports tournaments and solve serious tasks on data analysis? This week, Sberbank’s “Contribution to the Future” foundation launched the AI Academy project that aims to give every school student an opportunity to find out more about AI technologies, machine learning, and Big Data analysis, as well as develop their competencies in programming and mathematics. As part of this project, ITMO University hosted open lectures on machine learning and Big Data for 7-11 grade students. 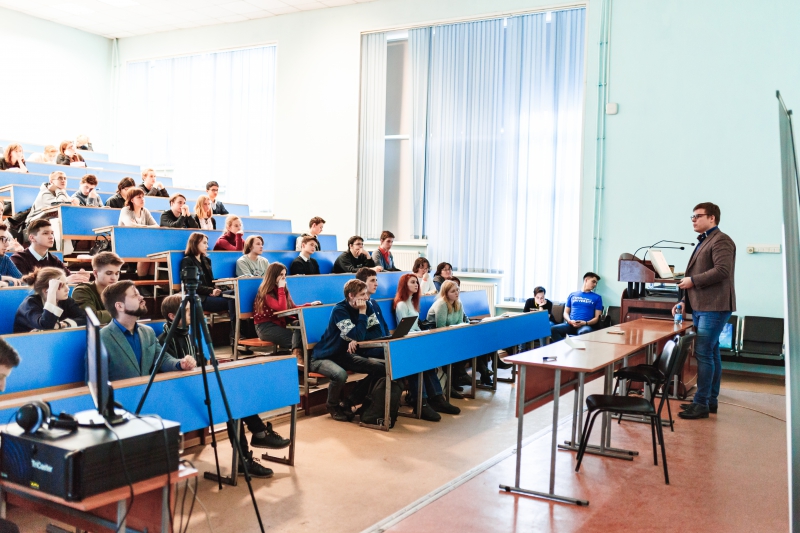 Open lectures on artificial intelligence took place from March 12 to 18 in seven Russian cities - Irkutsk, Ulyanovsk, Tomsk, Yekaterinburg, Ivanovo, Tumen and St. Petersburg, with Sberbank’s staff members as lecturers. The initiative was launched as part of this year’s Week of High Technologies.

In St. Petersburg, it was ITMO University that hosted the open lectures for school students. The first introductory lesson was aimed at students of grades 7-9; the children learned about the history of artificial intelligence, today’s key trends, the prospects of machine learning development and data analysis, and the relevant professions that have to do with this field.

What is the difference between weak and strong artificial intelligence? What are the tasks that computers already solve better than humans? How do neural networks turn any image into a piece of art, and which of the fields of human activity are already automated with the help of machine learning? These are just some of the topics that Andrei Chertok, Head of Technology and Data Academy of the Corporate University of Sberbank, spoke about.

During the second lesson designed for senior students, he analyzed beginner-level tasks and gave examples of cases that data analysis specialists from the country’s leading companies face. For instance, what is the amount of money that one has to load into the tens of thousands ATM machines in different Russian cities in order to optimize the bank’s operation? Sberbank’s specialists get to solve this and similar tasks on a regular basis.

Today, machine learning and data analysis make it possible to optimize medical diagnostics, predict underhanded transactions, bring search engines to a whole different level, and a lot more - there’s a multitude of examples. What’s more, it is since school that one can start doing data analysis, notes Andrei Chertok.

“This summer, we participated in the activities at Sirius, whereto we brought real tasks from the banking sector. Much to our surprise, the students coped well with them. And it was then that we noticed that there’s nothing preventing us from teaching these skills to school students. This is the first time that we conduct such an event on a national level, but we aren’t planning to stop here, we aim to bring this topic to every school. In the future, we are planning to develop this initiative, and we can already see school students participating in different competitions and hackathons and winning,” he says.

How does one start studying machine learning?

Machine learning is one of the few fields where the barrier of entry is very low. What is more, today’s novices have access to such machine learning libraries as TensorFlow by Google. In order to start doing machine learning, one has to have good mathematical background and the basic knowledge of Python. Also, there are no age restrictions, adds Andrei Chertok - nowadays, some children start learning programming languages back in junior high.

“It was our intention to develop a set of different activities for each age group. Our lessons are introductory, so they are comprehensible to not just students of 7th grade, but to students of 6th and even 5th grade as well. Still, in order to really start solving tasks, one has to at least know the basic programming languages. This is why we have to consider the current programming education in schools; on the average, that would be the 7th grade and higher that we’ll talking about, though children have their first experiences with computers even earlier. There are already talks about teaching the theory of artificial intelligence to preschoolers, so, it may well happen that this will become part of our lives in the future,” comments the head of Sberbank’s Technology and Data Academy.

For instance, Ekaterina Bykova and Olga Petrova, high school students from Kirishi, started programming in Python back at their Computer Science classes in school. As of now, the girls already do web design, and consider several professions in the field of information technologies for their future careers.

“We learned about this event at school, and as we both want focus computer science, we were eager to attend. We already do programming and web design, and code on Python. The latter is thanks to our school teacher who is interested in programming languages and gives us additional knowledge, they share. It’s true that we are witnessing the automation and digitalization of many fields of human activity, which is why computer science and everything that has to do with machine learning seems all the more promising. For now, we are looking to choose a particular field to tie our future with, so getting to know about new professions is most interesting. Today, we learned about data science, which looks very interesting, as well.”

Another of the participants, Aleksandr Kokov, an 8th grade student at Presidential Physics and Mathematics Lyceum №239, is already studying Pascal, Java and C++ despite his young age; by the way, he studies the latter by himself, with the help of online lessons.

“I read about the event on our school’s website, and decided to participate, as this is a very interesting topic. Artificial intelligence is really the future. As of now, I’m doing programming and robotics, he explains. To my opinion, the field that has to do with machine learning and data analysis is quite close to robotics. I can’t say for sure which I like more: both programming robots and working in the field of data analysis and machine learning seem interesting and promising enough”.

The AI Academy project gives students an opportunity to test their skills in an online competition that has started on the project’s platform on March 5. It’s first part allows to train the new skills by completing four tasks in an ascending order of complexity. The second part includes solving advanced tasks and developing a working algorithm based on data from a popular computer game. Until April 12, its participants can compete in solving the real task of predicting the results of a Dota2 tournament; the top-100 will get an invitation to a hackathon that will take place on April 21 in Moscow.

According to Andrei Chertok, the project has already gotten wide coverage. As of today, more than 20,000 school students attended the lesson in an onsite or online format. Mr. Chertok stresses that the project will become a long-term one thanks to further collaboration with Russian schools.

We’d like to add that you can stay up to date on all the AI Academy-related news on its website - or by following @AIAcademy_bot on Telegram. As for the information about the different open lectures, workshops, schools and other activities for school students at ITMO University, you should refer to ITMO.START website.